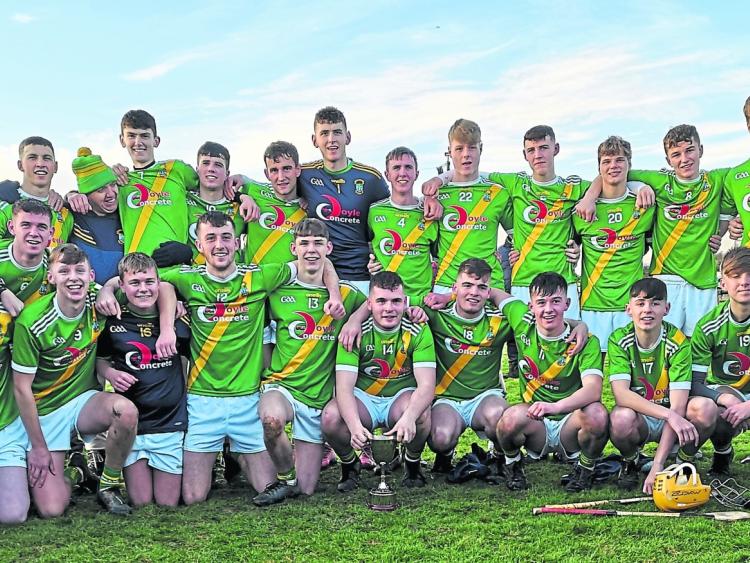 It may have been the last competitive hurling game of 2019, but the under-21 Roinn C championship final was a real Christmas cracker.

It was so near to the blessed day that the aroma of the Christmas turkey was almost in the air in Carrigeen’s Asper Park.
After all the heavy rainfall the previous month, the Carrigeen venue was in excellent condition, which reflected well on all at the Carrigeen club.

Carrickshock and Slieverue produced a top class game to celebrate hurling and the season that was in it, with the mood of the exchanges serious but respectful.

The action was so good and close that neither team deserved to lose in the end because there was nothing between them.

But, as they say, you take your chances and that’s exactly what served Carrickshock that bit better.

Slieverue were the more impressive team from the throw-in and with Craig Phelan and Paul Rellis, along with Evan Cullen, causing havoc.

The Carrickshock team struggled to find their way into the game.

Jack Frisby at centre-back was totally dominant for Slieverue. Throughout, the deep south lads looked like they would sweep Carrickshock away.

In fact, Carrickshock were living on scraps and were fortunate that Slieverue coughed up several good goal chances.

In fairness Carrickshock, they kept plugging away with frees from Eoghan O’Neill along with individual points from Jake O’Dwyer, Barry Lennon and Luke McNamara keeping the score at half time at 0-8 to 0-5 in favour of Slieverue.

The winners certainly started the second half with more purpose and a more determined edge.

They made a number of positional changes in an effort to nullify the dominance of Frisby and Phelan, and in doing so they started to dominate the game.

However, they didn’t help their cause as they proceeded to drive six dreadful wides. The free count started to mount against Slieverue and that indiscipline was to prove costly.

Eoghan O’Neill was deadly accurate from frees, and he made gains at every opportunity.
Even goalkeeper Dan Blanchfield got in on the act, landed a monstrous free from 80 metres which was a huge boost to the ’Shock.

Eoin Crowley put the ’Shock a point ahead in the 59th minute, but on the stroke of the hour Craig Phelan scored an outrageous equaliser for Slieverue.

At that stage everyone was calling for the final whistle in order to push the game into extra time.
O’Dwyer winner

Play continued, however, and moving into the 32nd minute midfielder Jake O’Dwyer, who had been outstanding in the second half, fired over the lead point for Carrickshock.

That well taken score was to prove the winner. After the puck-out the final whistle was blown.

It was exhilaration for Carrickshock and despair for Slieverue.

Best for Carrickshock were Jake O’Dwyer, Eoghan O’Neill, Eoin Crowley, Luke McNamara and Barry Lennon.
For Slieverue, no more could have been asked of Craig Phelan, Paul Ellis, Patrick Dowling or Jack Frisby.