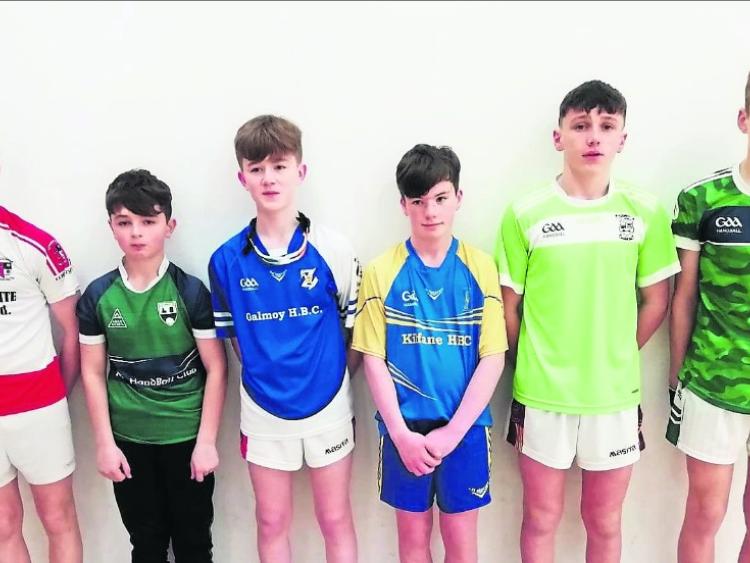 Pictured are the boys’ under-14 championship players

Now that the dust has settled on the start of another year, there has been little time wasted in getting the handball season up and running.

The new 4 Wall season has certainly started in a busy fashion. At local juvenile level and in adult tournaments the action for 2020 is in full swing.

On Saturday night the first rounds of the Leinster championships commence with matches across various venues in the province.

Last weekend some of the county juvenile championships were played. There were victories for Sean Barron (Windgap) in boys under-17 singles, David Holden and Kyle Jordan (Kilfane) in boys under-15 and under-16 singles, Amy Brennan and Lauren Power (Clogh) in girls under-16 and under-17.

In the county Gael Linn competitions played in Kells and Clogh there were victories for Kilfane and Clogh.

At the Kells court, Kilfane duo Cian Doherty and Katie Jordan defeated the host club in their final, and at the North Kilkenny venue the host club pairing of Kerri Maguire and Bobby Brennan, Clogh, defeated another pair from the Kilfane club, Oisin Farrell and Blathnaid Mullins.

Both pairs progress to the Leinster stages of this very popular event. The national Gael Linn day is on the first weekend in February.

This weekend the John Gaffney tournament will be played in Mayo. Nearly all the top players in the country are expecting to converge on the western county.

At the end of 2019 the Funchion brothers, Patrick and Peter, were ranked number 5 and 7, respectively in the national standings.

Both will expect to improve their position on the ranking ladder as they push for honours this season.

Another big event on the horizon is the She’s Ace Ladies weekend in Breaffy House, Mayo on Saturday and Sunday, January 25 and 26.

One of the biggest events of the handball calendar, and the biggest all female event in handball worldwide, this weekend has grown enormously over the last few years.

Attracting players from all abilities and ages the weekend of action has proved to be a huge success and continues to grow.
In recent tournaments played in Cork and Cavan there was success for local players.

At the Cork venue, Clogh sisters Katie and Amy Brennan won the girls under-13 and under-15 titles while Una Duggan (Galmoy) was the runner-up in the under-13 event.

The boys under-13 decider was an all Kilkenny affair with Conor Doyle (Windgap) defeating Niall Drennan (Galmoy) in a tie break.

At the tournament in Kingscourt on Saturday, the intermediate singles competition was won by the youngest player on view, Billy Drennan (Galmoy).

He defeated another Kilkenny player in the final, Shane Dunne (Clogh).