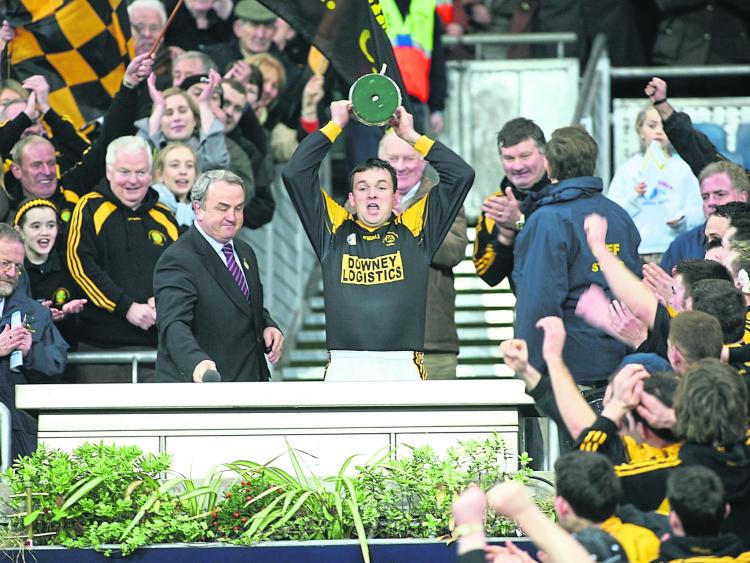 Eoin Murphy remembers the occasion as if it were only yesterday. Conahy conquered Croke Park, and ascended the steps of the Hogan Stand as champions.

And now he wants the heroes of today to immerse themselves in the All-Ireland final occasion and draw as much from the day as they can.

“My message to the lads would be to forget about everything else,” insisted the Conahy Shamrocks captain of the All-Ireland junior club championship winning team of 2008.

“Enjoy the experience. Savour it. Make the most of it.

“You have to be tuned in if you are to win, but you will get more from the final if you can take it in your stride rather than letting it take hold of you,” added the goalie who has followed Conahy’s every stride in this campaign.

“I remember saying at the time that defeat and failure had driven us on,” he laughed when recalling the big day. “What is happening now brings back great memories.”

He started hurling with Conahy in 1991 and finished in the summer of 2008 after defeat by Danesfort in the intermediate championship.

That junior county final success - it was in 2007 - was followed by a glory run in Leinster and the All-Ireland series. The medals represent the biggies from his career.

He lives in Jenkinstown near the woods, and he remains a Conahy man through-and-through.

“For me that final was the end of the line, really,” Eoin explained when asked to reflect on Conahy’s day of celebration which ended with fellow Conahy man and GAA President, Nickey Brennan, presenting him with the winners trophy.

“The defeat later in Kilkenny by Danesfort was the end of my career.

“I was lucky to be able to hold on long enough for a good winning team to come along,” he insisted.

“The Leinster and All-Ireland campaigns for us, certainly myself, were ones of ferocious enjoyment. I never knew what it was like to win a county final until that year.

“That is one worry I have about Saturday. When you are county champions in Kilkenny you stand a foot taller, you are a yard faster, you are super confident. The teams we played almost bowed down in front of us before the All-Ireland final against Moyle Rovers.

“For someone like me, who was a typical junior hurler, getting to play and win in Croke Park was terrific. I felt when we were going to Croke Park that we couldn’t be beaten.”

“I don’t really know,” he replied.

“Maybe it is a Kilkenny thing. We had grown as a team throughout the campaign. We had very experienced lads over us in Diarmuid Healy and Martin Fitzpatrick.

“I thought with our young team moving the ball fast and playing Kilkenny hurling I just couldn’t see us being beaten.”

He said he often spoke to people about this. He couldn’t explain the feeling. The winning effort came with a certain ease, even if the opposition had a man sent off after 20 minutes or so.

“We all seemed to have played well,” Eoin continued.

“I approached the game making sure it was going to be an enjoyable experience, not something that would break me.

“Many times in crunch games things passed us by. That day didn’t. I squeezed the very best out of it, and enjoyed every second of it, without ever taking my eye off the ball.”

When it came to the All-Ireland, he remembered the first thing that struck him. It was the heat of the stadium.

Eoin was of the opinion that Conahy are armed to win.

In Davy and Brian Healy, Kieran Mooney, Tom Phelan and James Bergin they have “possibly the best five players at junior level in the country”.

“If they perform we will have a great chance of winning,” he insisted.

“We can end up as All-Ireland champions. After being beaten in the Kilkenny final there was a little something there, a bit of uncertainty.

“However, once we got over the first game the view of things changed. The attitude was that we will make the best of this.

“The players have turned this into a fantastic opportunity.

“I think the players are more ready than they possibly realise,” the manager finished.

“If we play to our strength of getting the ball in fast to our key forwards, we will have a right chance.”