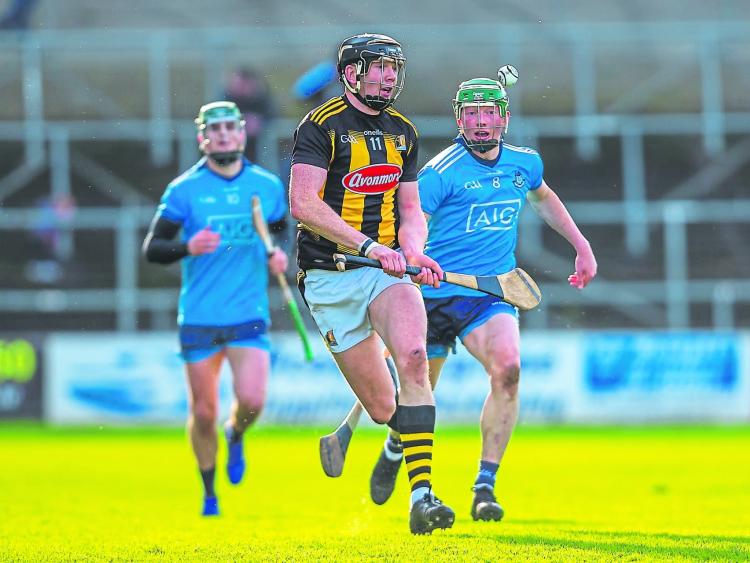 Walter Walsh in action during the Allianz Hurling League Division 1B game between Kilkenny and Dublin at UPMC Nowlan Park Picture: Mark Desmond

It might seem like a century ago now that Kilkenny were involved in the All-Ireland final, but just like that the Kilkenny hurlers found themselves getting stuck into a new National League campaign.

And not long down the road they will be steeling themselves for the Leinster and hopefully All-Ireland championships.

Unfortunately, losing the All-Ireland final to arch rivals Tipperary made the winter seem that bit longer for supporters, and possibly players as well.

The dawning of the new year and new season, as ever, gave rise to hope and a longing that Kilkenny can be among the real contenders again.

It was always a saying in the Kilkenny dressing-room that once January came, there were no All-Ireland champions. Everyone was back to square one, on an even footing.

Before Sunday's opener in the League, Kilkenny had played one game. It was a Walsh Cup tournament semi-final against Wexford.

They lost that match but they were without a large chunk of players through club and college commitments.

However, the players that did grace the field showed intent to nail down a place, be it on the team or in the squad.

The message was that they would continue to do so in the National league also.

For the first round, Dublin were the visitors to UPMC Nowlan Park.

The men from the capital are something of an unknown quantity heading into 2020.

They were capable of big things, as demonstrated when they knocked Galway out of the 2019 hurling championship, but that was last year.

Still, they would be very much a threat to anyone who wasn’t careful against them.

All eyes were on the starting teams for Sunday’s game, simply to see who was playing, who was available.

Kilkenny gave the Shamrocks Ballyhale players a break to enjoy their All-Ireland success and rest weary bodies. It was the same with Padraig Walsh of Tullaroan.

True to speculation, Brian Cody named a youthful side, with plenty of newcomers mixed in with experienced campaigners.

Huw Lawlor was flanked by two Castlecomer men, Ciaran Wallace and Conor Delaney on the full back line, while Paddy Deegan was joined by Michael Cody and Michael Carey.

The spine of the attack was kept relatively solid with Walter Walsh and Ger Aylward filling the central positions.

Cody made a statement and definitely continued with the experimental attitude towards the League with that side.

With Dublin, manager Mattie Kenny kept with the same idea when he named his team.

There were also new faces included such as James Madden and Riain McBride.

Sunday was a bright and clear day for hurling. Kilkenny played into the town end during the first half.

Play in the opening minutes was very scrappy with several ‘scrums’ featured .

Both forward lines were extremely edgy and fans did not get to see the first score until the fifth minute.

It came from an Oisin O’Rorke free. Alan Murphy got Kilkenny going with point from a 65.

Kilkenny soon got into the groove. They were very impressive in how they put extreme pressure on the Dublin defence.

They made it very hard for the visitors to get the ball out and up the field. As a result, Kilkenny got a chance for a goal and Ger Aylward hit a rasper.

Dublin never led from that moment on, but they never stopped trying. Oisin O’Rorke was clinical on frees.

Kilkenny, however, were breaking down every Dublin puck-out. It was almost a sure bet that another goal would followed.

Eventually Billy Ryan rifled a shot past goalie Alan Nolan. There was no doubt it, the hosts tails were up.

There was drama in the 26th minute when Richie Leahy was shown a red card for a late tackle on Danny Sutcliffe. It was a somewhat harsh call.

It was a similar challenge to the one Brendan Maher made on Darren Mullen a week earlier in the All-Ireland senior club final, and his punishment was a yellow card. Fair or harsh? Make up your own mind.

Referees will have to be more consistent when dealing with this kind of challenges. If they deem them a sending off offence, they must be treated as such by everyone.

Nevertheless, the demons of the 2019 All-Ireland probably reared their heads again and Kilkenny were obviously keen to dismiss them.

The red card did not interrupt the winners flow. They finished the first half strongly. The score at the break was 2-10 (K) to 0-10.

While Kilkenny were a bit a sloppy at the start of the second half, they were still working hard. The likes of Niall Brassil, Billy

Ryan and Ger Aylward have obviously bought into the Cody ethos of good, honest hard work.

The Cats’ passing and ability to find each other in tight situations was doubly encouraging. Some of the players have not been playing together that much, so to see that aspect of their game so strong was brilliant.

Billy Ryan killed off the game with a second goal in the 59th minute. After that it was a matter of Kilkenny seeing out the game.

It was a case of job well done for Kilkenny in their first serious outing of the season.

The team was speckled with a lot of new faces, and most of them made a very good impression.

Most notable were the showings of Niall Brassil and Michael Carey. It will be interesting to see who Brian Cody plays this weekend against Carlow.

Richie Leahy is not eligible. There will be a queue for that position, one would imagine.