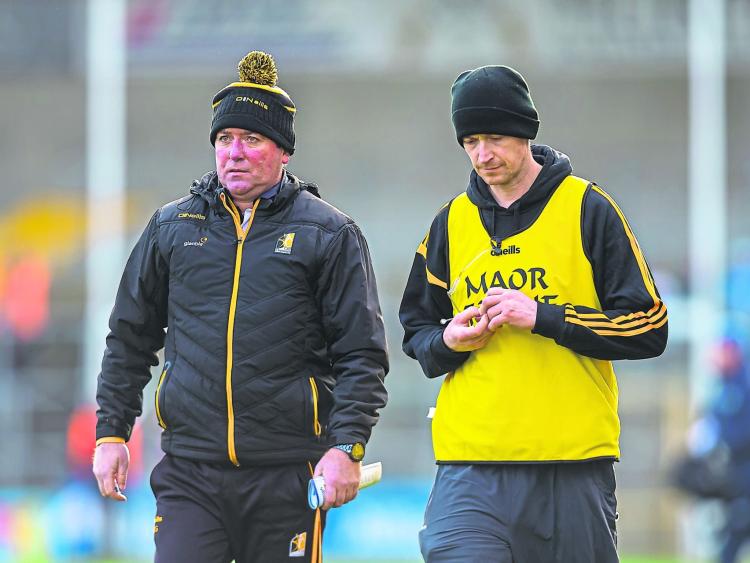 Kilkenny selectors James McGarry and Martin Comerford pictured making their way to the dressing-room at half-time during the Allianz Hurling League Division 1B Picture: Mark Desmond

Kilkenny manager, Brian Cody, was in an easy and relaxed mood after the big game, pleased with the result and reminding that it was still only January so it was far from ‘get excited’ time.

Beating Dublin well in the first round of the National Hurling League to get the Division 1B campaign going was a decent start, nothing more.

“It is the start of the League, it is January,” were the first words out of the mouth of the James Stephens clubman when he spoke with journalists.

“Every team at the moment is back into training and probably serious physical training and such like. We are always looking for a decent performance, genuine effort and all the rest of it.

“What we got was good. That was very positive. We got into the game early and we kept it going well right up to the very end.”

He was pleased with the showing of the new kids on the block, reminded that it was important for them to grasp every opportunity given to them.

“That is what this time of the season is all about for them,” he added, especially as there would be no push to bring back the Shamrocks Ballyhale boys or others involved in the All-Ireland club championships.

The return of the likes of TJ Reid, Padraig Walsh and so on would be guided by the physical trainer, physios and so on, he revealed.

“We will see how that goes,” the manager said of the situation of players who have been in training and playing matches throughout the winter. “There is nothing definite on that yet.

“Some may need a longer break than others,” he offered.

“We will judge that going forward with our physical trainer, physios and so on. They will have the biggest say on that.”

In reply to a question, he said Cillian Buckley and Richie Hogan were going well and were getting a nice bit of training done, so they were very much in the picture, long and short term.

On the subject of the club All-Ireland wins, Cody described the hat-trick of victories by Shamrocks, Tullaroan and Conahy Shamrocks as “outstanding, a terrific achievement by the three clubs.”

“It is a terrific thing to be able to say that the three All-Ireland club champions are from our county,” Cody added. “The three clubs played terrific hurling to win.”

He said he always classed Dublin as a serious team, who always presented a serious challenge to Kilkenny.

“We did well against them, there is no point in saying otherwise,” he continued when returning to the subject of Sunday’s League tie.

“We are very, very happy going away after that performance. We played a lot of the game down a player.

“The lads showed a lot of maturity, honesty and great spirit to keep it going.

“The result was important. When you are in a position to win a game it is important you go ahead and do it. The lads did that well.”

They showed the kind of fight for places he likes within the squad, he insisted.

“We won’t be picking the team based on anyone’s form from last year,” said the man who has been leading the way since 1999. “When fellows get an opportunity to show what they can do, they have to grab it.

“Then someone else has to come back and try and grab it back from them. That is what drives things on.”

The top teams in Division 1A and B qualify for the League semi-finals, and that is where Kilkenny want to get, if they can.

“Look, we will take it match by match,” the manager insisted. “The object is to try and win every match. Will that happen? Who knows?

“Every team will be trying to do the same thing. This is the first game in the League. It is the end of January. A lot of things can happen yet.”

What was the relevance of this game bearing in mind the Cats face Dublin in the first round of the Leinster championship, he was asked?

“Come the first round of the championship in May in Parnell Park neither team will look upon this game as having any relevance,” Cody shot back.

“A lot of water will flow under the bridge between now and then. Everyone knows the challenge of Dublin, and Parnell Park seems to add something greater to them. That match is a long way off.”