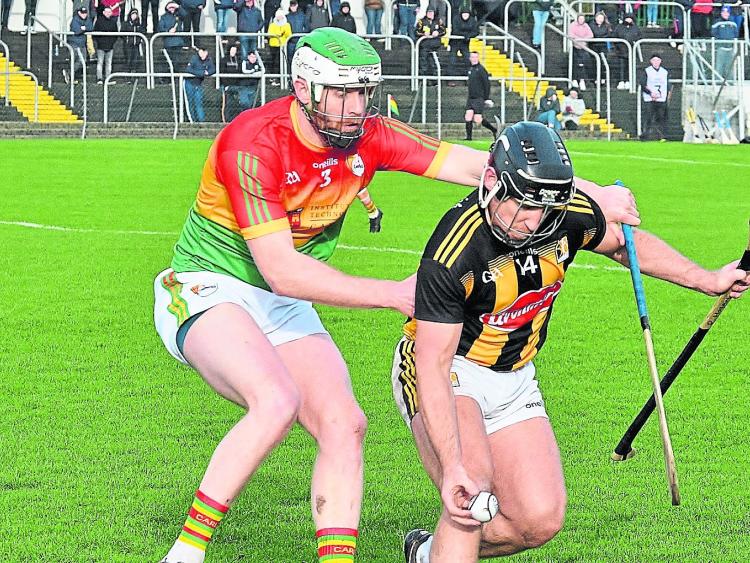 The pairing of Kilkenny and Carlow in a hurling match has been rare during the last two decades and more.

It has become a more common occurrence over the last two years. There have been two contests in the National League and championship last year and this year so far.

Kilkenny were the victors in the Leinster round robin championship clash between the counties last year. The manner of the victory was not all that convincing.

The Cats had been sloppy and wasteful with the ball, and had Carlow been that bit cuter, things would have been a lot tighter at the finish.

The Carlow hurlers have had a lot to be proud of in recent years. Their main hurling strongholds, St Mullins and Mount Leinster Rangers supplied some very talented hurlers such as James Doyle and Martin Kavanagh to the county set up.

St Mullins, in particular, were very impressive in the Leinster club championship and gave Shamrocks from Ballyhale plenty to think about in the final.

Carlow manager Colm Bonnar has guided the county well, and they now find themselves playing the likes of Kilkenny, Wexford and Clare in the League. Irrespective of the results, that can only be a good thing.

Going shoulder-to-shoulder with massive hurling powers will only bring on Carlow.

Kilkenny were hoping to continue their decent form from the recent win over Dublin for the visit to Netwatch Cullen Park. Despite the disappointing challenge from Dublin, Kilkenny’s new players had shown enthusiasm and an impressive work-rate, which the boss demands all the time.

Of course, Brian Cody was well entitled to try a new formation against Carlow. He had more players available to him so he could afford to be flexible.

The likes of Paddy Deegan and Huw Lawlor had shown great leadership against Dublin, so they were likely to hold on to their places, as would goalkeeper Eoin Murphy.

Whoever would join Deegan and Lawlor on the wings, in midfield, and in the forwards was anyone’s guess.

The team that was announced was interesting for a couple of reasons. Obviously Brian Cody wanted to have another look at Michael Cody and Michael Carey in the wing back positions, plus Ciaran Wallace and Conor Delaney on the full back line.

There were changes in the forward line. James Maher was named to replace the suspended Richie Leahy. Richie Hogan made his return to the forward line, as did Bill Sheehan.

Giving players game time at this time of the year is a must, if they are fit.

Carlow manager Colm Bonnar was hoping his panel of progressing players and young guns would produce a defiant and confident display on their own home patch.

There were a couple of amendments to the Kilkenny team prior to throw-in. Conor Fogarty was replaced by Martin Keoghan and Enda Morrissey and Conor Browne were added to the match day panel.

Keoghan moved to the half forward line with James Maher moving to midfield. Kilkenny played into the breeze in the first half.
They got off to a flying start with Alan Murphy getting their first point from a free. Ger Aylward and Bill Sheehan followed with points.

Carlow were really struggling to keep the Kilkenny forward line chained down, and things took a turn for the worse when wing-back Michael Malone was red carded after a high challenge on Huw Lawlor.

It all seemed to be turning into an uphill struggle for the hosts. That’s the way it turned out.

Martin Kavanagh scored Carlow’s first point from a free after 10 minutes. However, Kilkenny had an a big response - a goal from James Maher.

The visiting forwards were in a punishing mood. Walter Walsh grabbed a point that could have been a goal if not for a good, brave save by Carlow goalkeeper, Damien Jordan.

The Cats were really testing the strength of the Carlow defence.

The only concern about Kilkenny was that they were a bit sloppy in their discipline.

The shining light for Carlow in the first half was the performance of Martin Kavanagh. He was an important player, shooting all their scores in this half.

He probably would have made more of an impact had Kilkenny not had a spare men.

Kilkenny, while they never looked under threat, began to play haphazardly and with a lack of conviction. Perhaps it was because of the lack of stiff opposition, but on this showing, there were definite aspect of play that would need to be worked on.

The first half finished with Kilkenny leading by 1-12 to 0-5.

The second half action followed much the same narrative. Kilkenny were doing just enough to ease through, without over-exerting themselves.

They made a couple of substitutions at the break, with Niall Brassil coming on. There was a bit of shifting around on the full-back line.

Conor Delaney was moved to the half back line. Things really imploded for Carlow after Ger Aylward shot Kilkenny’s second goal.

Carlow were now playing for pride, not victory.

Kilkenny kept plugging away, and Richie Hogan in particular was getting more involved as the game progressed. It was a positive sight, considering how last year ended for him.

He is the kind of player you want in your starting team. Hopefully we will see more of him throughout the season.

Kilkenny won comfortably, but the performance wasn’t all that convincing. Perhaps that will turn into a positive thing going forward and they can improve when they travel to Wexford.

That will provide a much sterner test. For now, Kilkenny are on the right road and are on course for a place in the knock-out stages of the League.