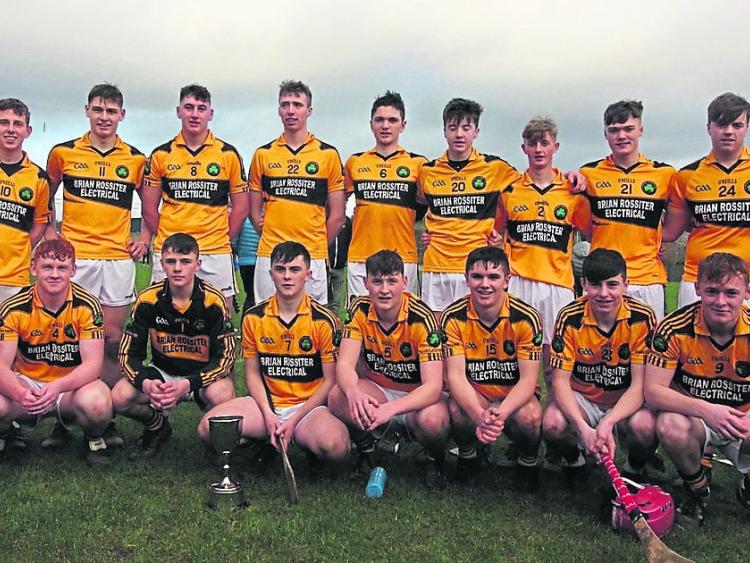 Conahy Shamrocks continued their recent successful run when they scored a fine win in the 2019 Permanent TSB under-19 Roinn D hurling county final against Tullogher Rosbercon in Graignamanagh on Saturday.

In what was an enjoyable game for the good attendance, the winners laid the foundation for victory in the first half.

The Southerners will rue numerous missed chances in the opening 12 minutes of the second half when they were the dominant side.

A pointed free from Karl Downey gave Conahy a good start, only for the impressive Brian Walsh to equalise for Tullogher one minute later.

Mark Gunner edged Conahy ahead from a free almost immediately when Geoffrey O’Shea was fouled.

The highly talented Danny Glennon scored the first goal for Tullogher on four minutes when he gained possession, ran at the Conahy defence and gave goalie Harry O’Mahony no chance with a well struck shot.

Straight from the puck-out Conahy went on the attack. Mark Gunner set up Thomas Rice for his side’s first goal, and a lead that the winners would hold to the finish.

The accuracy of Mark Gunner from play and frees was a big factor in Conahy getting on top in this half.

However, three pointed frees from Brian Walsh left one between the sides as the game entered the closing 10 minutes of the half.

Conahy scored their second goal five minutes before the interval. A long delivery from Karl Downey was collected by Mark Gunner, who shot to the net.

The sides shared four points – Mark Gunner (free) and Thomas Rice for Conahy and Brian Walsh (free) and Mikey Handrick for Tullogher – before referee Eoin Hayes blew for half-time with the winners leading by 2-9 to 1-7.

Tullogher dominated the opening 12 minutes of the new half, but strangely, Conahy out-scored them in that period by two points to one.

The southerners enjoyed an abundance of possession with Marc McGrath grabbing an early point, but poor accuracy was to prove very costly.

While both teams had to contend with a testing cross-field breeze, Tullogher will be disappointed with the many scorable chances they missed.

Despite enjoying modest possession in the early stages of the closing half, Conahy had points from Mark Gunner (free) and Eoin Cahill, the latter following a quickly taken Karl Downey free.

This saw the winners lead by six points after 41 minutes.

Conahy’s third goal scored mid-way through the half by Jack Murphy gave the winners some breathing space, but the response from Tullogher was impressive.

Points from Danny Glennon, Frank Murphy and Marc McGrath brought the margin back to five points.

Tullogher needed a goal and they got one from a penalty close to full-time from Brian Walsh.

However, by that stage Conahy had one hand on the trophy following points from Ciaran Rice and Eoin Cahill, after another quickly taken free by Karl Downey.

It was fitting that Conahy’s best player Eoin Cahill should get the last score of the game, pointing from midfield after a wayward Tullogher clearance.

His move from attack to midfield in the second half was an important factor in Conahy’s victory.

Bar a period at the start of the second half, the winners held the upper hand for much of this final.

In what was a fine overall team performance from the Shamrocks, Sean O’Dornan, Darren Cuddihy, Frank Gunner, Eoin Cahill, Karl Downey, Thomas Rice and Mark Gunner impressed for the winners.