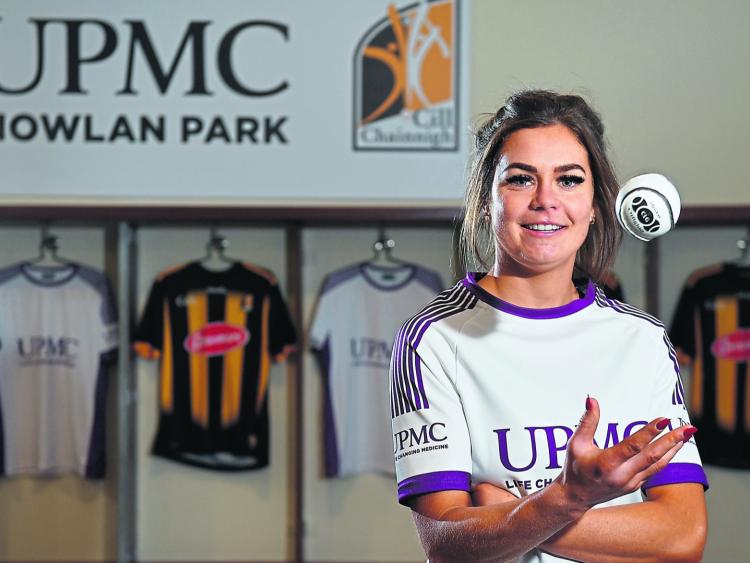 Camogie is enjoying a high profile in Irish sport. Being a role model for the next generation is something Power feels can only benefit the game in the future Picture: Sam Barnes/Sportsfile

A new year brings new hope and new possibilities. For many there’s the same old target at the end of the road: to be crowned a champion.

“Everyone’s end goal is to try and get back to the All-Ireland final,” was the honest admission from Kilkenny senior camogie star Katie Power.

“For us, as a team with a new manager and new panel, I think to even think about getting back there will be the hardest thing. We have a long road ahead of us, mentally and physically, so we’ll take every challenge as it comes.”

The Piltown player is as tough as they come on the pitch, taking no prisoners whatever challenge is put in front of her. Off it she’s refreshingly honest, never dodging questions or hiding behind stock answers. It makes her a leader, character will be key as the Cats get their 2020 up and running with a Littlewoods Ireland National League clash against Waterford.

“The National League is there to be won,” she said.

“It’s a competition we always try our best in, but getting the best out of ourselves this summer will be our main goal. We want to get back into the semi-final stages and see where it goes from there.

“For us, the way things have gone the last few years, trying to break things down as simple as we can. Getting to the semi-final, you’re only one game away from the big day.”

The Cats have had plenty of experience when it comes to the big occasion. Winning it, however, has become something of a hard luck story for Kilkenny camogie.

“It’s so hard to put your finger on it,” Power said when asked why Kilkenny have had such wretched luck in senior finals.

“It’s hard to even say it out in words. You think you’re good enough to win but, for whatever reason on the day, we haven’t performed to the level we’re capable of. That’s something we’ll need to work on in 2020.”

After some seasons of heartbreak it looked like Kilkenny had turned the corner in 2019 when a series of clinical performances shot them back into the decider. However…

“Galway just blew us out of the water. We could have no qualms about the result as they were so much better than us on the day.

They hit us a sucker punch with the early goal and we were just getting our breath back when they killed us (Niamh Hanniffy and Ailish O’Reilly hit two lightning-quick goals) before half-time.

“Galway performed superbly in that final,” she added. “They were unbelievable on the day and we didn’t. They deserved to win; we didn’t.

“That’s the way goes, unfortunately,” she added. “You get one chance and when you don’t take it, it’s gone.”

In terms of physicality camogie is as tough as it’s ever been - the new trial rules will give the game a tougher edge - but what of the mental side of the game? How long does it take to recover from a defeat like the All-Ireland final?

“It gets harder every year it goes on,” she said.

“We had club games the weekend after the All-Ireland final, which was the best thing for me as I threw myself into the club. That went on for five or six weeks but, unfortunately, we lost the county final as well.

“When we lost that game (Piltown were beaten by Dicksboro) everything came together at once - the All-Ireland you were trying to put to the back of your mind while playing with the club.

“That, coming with the loss of a county final, made it extremely difficult but you’ve no choice - you can sit down and give up or get up and try and go again. I’m not going to give up, so it’s time to try and go again.”

There’s a defiant air of resilience about Power, a character known for her refusal to give in. That determined spirit was never more apparent than her return from serious knee injury to become an All-Ireland champion in 2016. What drove her on?

“Without wanting to sound corny, I’m extremely lucky to be doing what I’m doing,” she said.

“I grew up wanting to hurl for Kilkenny. My parents made a lot of sacrifices for us (Power and her siblings) to help us along the way so I’m genuinely living out my dream.”

Realising the dream has pushed Power into the spotlight. Now she is a shining example for others to follow, something she found out at the UPMC launch of their deal for the naming rights of Nowlan Park.

“I was talking to some of the girls from St John’s when we were down in the dressing-rooms,” she recalled.

“I was asking them who their favourite hurlers were and one of them said I was. I was expecting her to say Eoin Murphy or Tommy Walsh, so simple things like that remind you why you play the game. Knee injuries, at the time, were awful. I had three years of really bad luck with that, but I was young and it was either give up or stay going - touch wood things have gone well for me in the last few years on that front, so hopefully I can stay that way for a few more years.”

One of the pictures of the year in 2016 when, after winning the All-Ireland, Power stood on top of the podium and lifted the O’Duffy Cup into the Croke Park sky and roared with joy. If any picture could paint a thousand words, that was it.

“Things like that, with the knee, means you have lonely days when you wonder if it’s all worth it - will I ever get back or will I be any good if I get back? - so I remember 2016 being my first year where I was injury-free,” she said.

“That was a massive thing for me and my family, as they saw everything I went through the three years previous. From that point, being able to celebrate like that, was deadly.”

Having come back before, Power knows what it takes. Now she and the rest of the Kilkenny panel are ready to give it everything again in 2020.

“The defeats are tough, they are - there’s no point in saying anything different - but we’re an extremely young panel,” she said.

“Even the older players are in their 20s - I’m only 28 - and I find that I’m fitter now than I was five or six years ago. We’re a young panel but we’ll have some freshness about us before the League.”

While the focus is on 2020, the All-Stars trip to New York was a nice way to round off 2019. A four-time All-Star Power was part of the 2018 team who took on their 2019 counterparts in an exhibition game the Big Apple.

“It was brilliant,” she said of the experience. “It’s things like that you’ll remember when you hang up the boots and say ‘how lucky was I to be brought to New York with the most elite camogie players in the country’.

“There were players on that trip you’d look up to, people like Gemma O’Connor, so it was amazing from that point. It was great to have camogie spoken about in a positive light. While 2019 wasn’t the best year for us, as a whole camogie is going forward, which is great for the game.”

The Kilkenny players, management teams and hard-working County Board officers, can take their share of the credit for that.

Together they have helped to raise the profile of the sport, giving younger fans the chance to meet their heroes and draw inspiration from their efforts.

“When I was growing up all my heroes were the hurlers because they were so successful and I was too young to have ever seen the Downeys play,” Power said.

“When I was growing up camogie wasn’t going as well as it had been in the past, but now things are different. While we’ve only won one All-Ireland in the last few years we’ve been there or thereabouts.

“It’s great for the kids in Kilkenny to have camogie stars to look up to,” she added.

“That can only have a positive impact on the sport in the county in the future.

“The more girls we can make an impact on through what we’re doing is only going to have a positive return for Kilkenny camogie.”