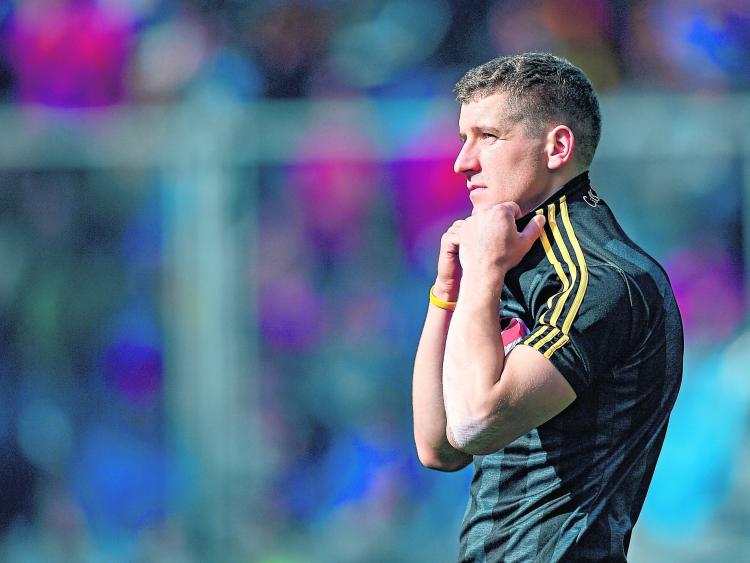 Goalkeeper Eoin Murphy has not only been brilliant between the posts for Kilkenny, he has been producing the odd score from frees too Picture: Sportsfile

Here we are heading towards the third match and things have reached tightening up time in the Allianz National Hurling League.

As far as Kilkenny and the top contenders are concerned, the squeeze can really come on in Group 1B this weekend.

The unbeaten Cats travel to Chadwicks Wexford Park on Sunday (2pm) for a crunch match against great foes Wexford, who are already two points down following a home defeat against Clare last time out.

One defeat is not the end of the road for Wexford, and neither would it be for Kilkenny or Clare, the other unbeaten team in Group 1B.

However, a second defeat for any county could end up complicating things seriously in terms of qualifying for the knock-out stages.

Dublin are lurking in the background, waiting to pounce after slipping up and losing their first game against Kilkenny.

Avoiding defeat or defeats over the next three weekends when rounds three, four and five in the League will be played is what it is all about as Kilkenny, Clare, Wexford and Dublin battle it out for the three qualifying places available to Division 1B sides.

Limerick and Waterford (Group A) and Clare and Kilkenny (Group B) are the pace-setters in Division 1 of the Allianz League after two rounds.

Already Tipperary’s chances of winning the Hurling League title for the first time since 2008 have taken a serious hit after the All-Ireland champions lost their opening two games to Limerick and Cork.

The results leave Liam Sheedy’s men four points adrift of leaders, Limerick and Waterford and two behind Cork and Galway.

With the top three qualifying for the knock-out stages, Tipp’s position is precarious, despite two decent efforts.

Last year’s finalists, Limerick and Waterford have been very impressive in the opening two rounds, which will make their clash in the LIT Gaelic Grounds on Saturday most interesting.

Kilkenny and Clare are on full points after two rounds, followed by Wexford and Dublin on two points each, while Laois and Carlow have yet to pick up their first points.

Most unusually, Kilkenny scored 3-21 in their wins over Dublin and Carlow.

Those efforts left Brian Cody’s men with a healthy scoring difference of +33 points, with Clare behind on +19.

If the Noresiders can avoid defeat in Wexford Park, then they will be in total charge of their own destiny when Clare visit UPMC Nowlan Park the following weekend.

All very nice and rosy looking, but there is the serious issue of facing wounded Wexford on Sunday. Davy Fitzgerald’s men beat Kilkenny in the Walsh Cup some weeks ago.

That game was played the week Kilkenny arrived home from their post Christmas holiday in Florida, and a team that was more or less thrown together did duty. Wexford were easy winners.

Things are more serious now, although, as ever, it is hard to know exactly what to make of results in the League. The reason is, no one knows for sure how much training work, and when, each county is doing.

At least Brian Cody has been straight up about Kilkenny and their hopes in the League.

They want to go straight through to the semi-finals, if possible. When he says that he means it, but he means it in the context of achieving the goal within a training schedule and workload that is geared towards hitting the best physical condition later in the season in the championship.

Players coming back after the exertions of the All-Ireland club championships won’t be rushed.

Players will be given breaks here and there in a bid to keep them fresh for the real business of the season in the championship.

Nothing new really, except that people sometimes forget and they expect teams to be going flat out. It is only February.

The League will finish by the end of March which is not even the time the most serious skills sharpening work will commence as we head into the long evenings.

Meanwhile, counties like to put down markers. Wexford wouldn’t mind running up another win over Kilkenny.

They have been getting good at that in recent years as Fitzgerald has brought a bit of magic and challenging game plans into play.

Wexford will be bidding to extend their unbeaten run against Kilkenny to six games.

All that leaves Kilkenny seeking their first success over Wexford since their one point win in the 2018 Leinster championship.

Kilkenny don’t like losing. They did well to beat Dublin in what was expected to be a tough, tough affair bearing in mind the

Shamrocks Ballyhale and most of the Tullaroan players were rested after the All-Ireland club finals.

The most surprising thing about that game was how badly Dublin performed. Kilkenny won, and they were happy, but the Dubs never really rose a gallop even though the opposition had a man sent off early on.

Next time out Kilkenny scored the win all expected over Carlow. Cody and selectors James McGarry, DJ Carey and Martin Comerford didn’t change the team around much, fielding the same goalie (Eoin Murphy) and six defenders.

The changes up front saw former Hurler of the Year Richie Hogan come into the starting XV, as did James Maher in place of Richie Leahy, who saw red against the Dubs.

The same Leahy has been shooting out the lights in the Fitzgibbon Cup with Carlow IT of late, so he is very much a form player at the moment with a decent bit of hurling behind him.

Cody revealed after the Carlow tie that the Shamrocks and Tullaroan players were back in training with the squad - Martin Keoghan has actually featured in both games to date - but fans shouldn’t expect an instant return for all the players who featured in last year’s All-Ireland final.

Cody’s way has always been to give players a run in the League, and if they do anyway well, they will be retained.
On that basis, and because of the two victories, we wouldn’t expect wholesale changes this weekend.

The likes of Ciaran Wallace, Conor Delaney and so on gave the selectors no reason to drop them, so don’t expect the defence to change much.

We wouldn’t expect TJ Reid, captain for 2020 Colin Fennelly, Joey Holden, Padraig Walsh and so on to be parachuted right back into the team.

The more rest any or all of these guys can be given now the more they will be able to give as the hurling season drives on.

Because of the loss to Clare the last day (0-18 to 0-15), there might be more pressure on Wexford to chase a result.

For Kilkenny and some of the new players, this League campaign is all about the learning experience.

No better place to get a feel for big time hurling, big time pressure than in Wexford Park.