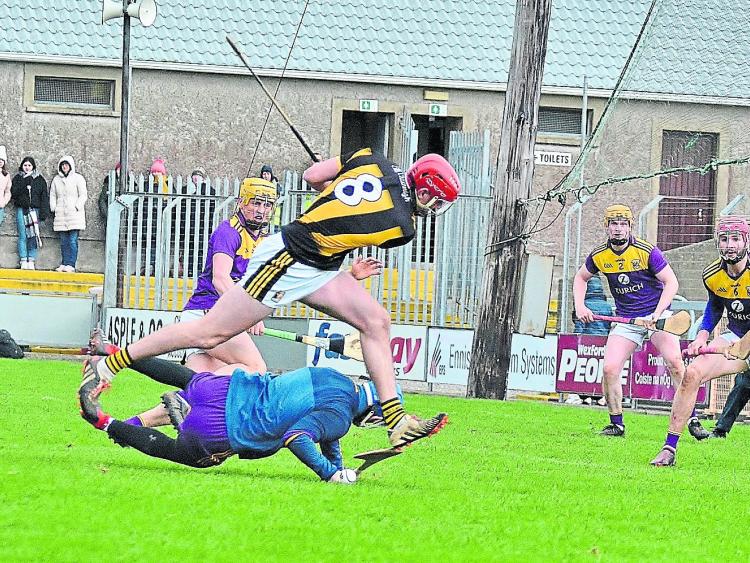 Up to the weekend in the Allianz National Hurling League, Kilkenny fans saw a whole set of new faces donning the colours.

However, they had yet to see them deal with anything like the challenges they will be facing when the Leinster championship arrives in May.

Neither Dublin nor Carlow troubled Kilkenny unduly, or at least to the point where Kilkenny felt the game was in danger of going from them.

They had to play reasonably well to prevent that from happening, but the satisfaction gained from winning a tight contest cannot be underestimated and it would be something Brian Cody and the selectors would want.

Then along came Wexford, who all reckoned would surely be the ones to give the Noresiders a stern examination.

The Model County had experienced mixed fortunes in the League. They won their first round joust against Laois, but fell to Clare a week later in round two.

They were capable of winning that game. They had the benefit of having an extra man as Clare had John Conlon sent off for a high tackle.

The game was tight all through, but Wexford were sloppy, shooting a lot of wides. They wouldn’t make the same mistake against Kilkenny.

There is a slight change about Kilkenny at the moment, however. It would appear Brian Cody has given his half back line more licence to move forward when traditionally they would have stayed back and defended in numbers.

The fact Wexford operate with a sweeper would makes things interesting, and we got a chance to see if Kilkenny had any other new tricks up their sleeve.

Conor Browne was selected at corner-back and Richie Hogan was awarded another starting place after his positive return two weeks ago.

Kilkenny and All-Ireland champions, Shamrocks had a representative on the bench in Darren Mullen.

Wexford selected a strong team and bench. Davy Fitzgerald had some seasoned troops in Conor McDonald, Liam Óg McGovern and Shaun Murphy, and they were joined by new faces such as Joe O’Connor and Aidan Rochford.

There was a late change to the Kilkenny team before the throw-in. Darren Brennan replaced Eoin Murphy in goal.

The weather, a howling gale with rain and sleet from time to time, made Sunday a far from good day for hurling. Storm Dennis ripped across the south east.

Kilkenny, as per tradition, opted to play against the wind after winning the toss. That choice would bring great difficulty.
James Maher split the posts early, but they struggled for a score after that.

Wexford, on the other end, had no trouble getting scores. Conor McDonald and Jack O’Connor were running their markers ragged. McDonald grabbed a goal which gave them a nice cushion throughout the half.

Twenty minutes would pass before Kilkenny got their second score, but that wasn’t from the want of trying.

Darren Brennan’s puck-outs were barely reaching the 60 metre line, so the half forwards had to retreat back in a bid to salvage any possession.

When they did get a shot on goal, the ball was held up by the wind and didn’t travel far enough to get over the crossbar. The Cats were battling the elements, plus fiercely determined, free running opponents.

Alan Murphy eventually got things going again when he converted a free.

After that things became a bit more promising for Kilkenny on the scoring front.

Richie Hogan, John Donnelly and Walter Walsh all grabbed scores, and there were a couple of decent chances created of scoring a goal.

Considering the strong wind, when Kilkenny went into the break seven points behind (1-10 to 0-6) they looked nicely placed.

The second half started solidly for Kilkenny. They had the wind in their backs, and they were really challenging Wexford.

Billy Ryan goaled early on and then Darren Brennan pointed. Wexford’s lead not so secure looking any more.

Davy Fitzgerald chose to use his bench early in the second half, bringing on Rory O’Connor and Lee Chin. These two big guns lifted Wexford and the Kilkenny attacking drive lost momentum.

Led by Richie Hogan and John Donnelly up the front, the visitors got back level (1-11 each). Kilkenny managed to get a point ahead with a score from Donnelly.

However, all the time free moving, hard running Wexford were getting a better grip on the game. It was becoming more and more difficult for Kilkenny to make ground.

Wexford took a bit of a battering early in the second half, but they survived it all to register a fine win that throws them right back into contention in the League.

Putting aside the loss, and the harsh conditions, it has to be said that Kilkenny gave a very good account of themselves.

There were successes on the day. Conor Browne was one. He really grabbed the opportunity given him, and turned in a stellar performance.

He will surely get another chance to further his ambitions.

No doubt there will be plenty of stern tests like this to come, but judging by Sunday’s display, Kilkenny will be ready for them.