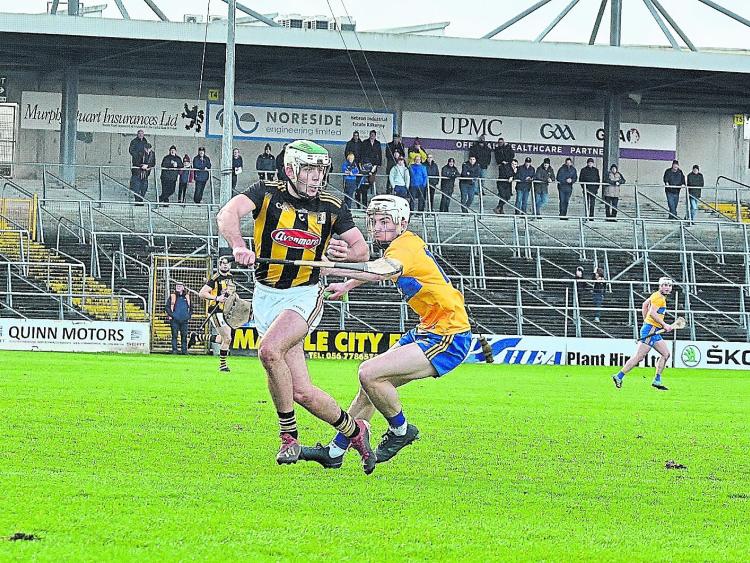 Paddy Deegan is growing into a strong leader in the heart of the Kilkenny defence Picture: Willie Dempsey

We are now four rounds into the Allianz National Hurling League. So far there have been a lot of positive developments in the Kilkenny squad, with players putting up their hands for a starting jersey.

The defence, in particular, has a decent look to it.

Huw Lawlor and Paddy Deegan may have nailed down the full and centre-back positions. They have developed into real leaders and have made Brian Cody’s life a lot easier as the county builds towards the championship.

There are also a lot of interesting options surrounding the four other defensive positions.

So far Ciaran Wallace, Tommy Walsh, Conor Browne and Michael Carey have all been tried on the full back line, and all four showed promise.

Conor Delaney, Michael Cody and Cillian Buckley have all been played on the half back line, and with Padraig Walsh, Paul Murphy and Joey Holden yet to return, plus if you add a certain Darren Mullen to the mix, it is anyone’s guess right now who might be in the defence for the Leinster championship in May.

The forwards have also shown lots of potential. Billy Ryan and John Donnelly have continued to blossom, and the form of new recruits such as Niall Brassil and James Maher has added to the glad tidings.

Again, with a certain TJ Reid, Colin Fennelly and Liam Blanchfield to come into the frame, the pick for the forward line could be lethal.

Clare were never going to be a pushover on Sunday. They have incredible talent within their ranks. Shane O’Donnell, John Conlon, Tony Kelly and so on would test team, and they did it to Kilkenny’s new defensive formation.

The Kilkenny team named for the game offered yet another surprise. Ballyhale Shamrocks had another new representative in wing back Darren Mullen.

The forward line had interesting inclusions in Richie Leahy, who came back into the frame after duty with Carlow IT, and Adrian Mullen, who returned to the ‘40’.

The Clare team picked by Brian Lohan and his selectors was strong, so the scene was set for a real battle.

Clare had a flurry of changes before the throw-in, Patrick O’Connor, Conor Cleary, Domhnail McMahon and Colin Guilfoyle came on for Shane Golden, Cathal Malone, Seadhna Morey and Aaron Cunningham. Kilkenny lined out as listed.

Billy Ryan got the ball rolling with a point in the second minute. Clare answered with a score from Colin Guilfoyle.

Adrian Mullen got his first point from play soon after. Clare were playing with a sweeper with Patrick O’Connor covering the full back line.

The game took a swift turn in Clare’s direction when Shane O’Donnell fought off his markers to bury the ball in the net.
However, the Kilkenny response was swift and impressive. John Donnelly, Adrian Mullen and Richie Hogan all scored.

The entire Kilkenny XV were gelling. There was good link up play. The players used possession well.

The only problem was the supply into the full-forward line. Richie Hogan was at full-forward. His marker was taller, and the ball was coming in too high.

The balls out of defence were too high for the attack to win. It made the job easier for the Clare defence.

If Hogan is going to be used in that position later in the year, then the supply of ball will have to be tailor-made for him; low, hard, fast.

Alan Murphy scored another two points from frees and things were looking positive. Then tragedy struck.

Adrian Mullen rose into the air to field a high ball, but he came down awkwardly and seemed to jar his knee when he hit the ground. Things didn’t look good as the talented forward was stretchered off.

The injury seemed to disrupt Kilkenny’s momentum. Clare punished them.

Ryan Taylor took full advantage of the hiccup. He out-witted the Kilkenny defence and shot the ball past Darren Brennan for Clare’s second goal.

Tony Kelly added to the misery when he shot over a free. John Conlon and Shane O’Donnell got in on the scoring act too.
Richie Leahy and Alan Murphy gave Kilkenny a bit of a lift when picking off points at the end of the first half.

From the start of the second half Tommy Walsh come in for Conor Browne. Richie Leahy moved into midfield and Alan Murphy joined the forward line.

Straight away Tommy Walsh looked comfortable. He made a difference.

On top of that, Ciaran Wallace was turning in a quietly solid performance. He had his hands full against Shane O’Donnell at times, but was he held his own and made a few timely interventions.

Kilkenny were struggling to win ball on the half forward line, and with Ger Aylward and Richie Hogan inside, possession was even harder to win. Hogan was replaced by Bill Sheehan, but the problem with deliveries remained.

Kilkenny management will have to look at this situation before the championship. Ger Aylward did manage to turn the game with a goal in the 47th minute, and Kilkenny ignited again.

The next 20 minutes of play were incredibly tense. Kilkenny went four points up with less than 10 minutes to go, but that lead was wiped out when Shane O’Donnell netted his second goal and Tony Kelly rifled over a free.

Kilkenny did their best to dig out a victory, but in the end they had to settle for a draw.

It was a game and performance that raised a few issues for management.

Obviously Mullen’s injury is a serious matter. The concession of three goals must be a concern.

Still there were things to enjoy in what was a wholesome game overall.