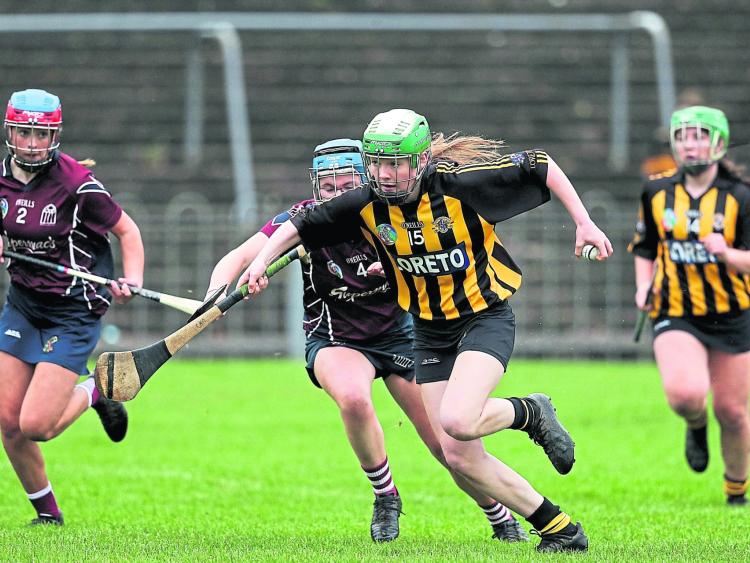 To win one final with a dramatic late strike is wonderful. To win two in such a joyous fashion borders on the extraordinary.

And it is in such rare territory that the Loreto Secondary School resides this week following a sensational double strike in the camogie senior and junior All-Ireland post primary schools A showdowns.

Three weeks ago the seniors stole the show via a late goal. It was more of the same when the dynamic juniors returned to wind battered Banagher for their shoot-out on Saturday, except on this occasion it was a late, late goal that did the business.

Downed in both finals were the Presentation College, Athenry, no ordinary outfits let it be said, with the juniors fielding remarkable talent in Sabina Rabbitte, Aoibhe Carr, Olwen Rabbitte and Chloe Quirke, among others.

A ‘never surrender’ attitude got the Loreto home in the end to reverse the result endured in the final last year. With the clock ticking towards the 63rd minute wing-forward, Ava Shefflin, lashed a high ball forward from the right.

Deadly finisher, Caoimhe Keher-Murtagh, claimed the ball from the sky about 12 metres out in front of goal. Somehow she won about a metre of space, and with a cluster of players around, unleashed a powerful shot at the target that ended with the net, and then her colleagues, dancing. It was the first time the Loreto hit the front!

One crisp strike decided a massive match that was crammed with individual and team brilliance on both sides. This was Loreto’s tenth win in 13 seasons, which is an off the charts achievement.

Reminding afterwards that both finals were won in dramatic fashion, Loreto manager, Brendan Williams added: “This win was even more dramatic than the senior one. Funnily enough, all through the game even though we were behind until that final ball hit the net, I felt we were capable of winning.”

Actually, Saturday’s success rounded off a treble of senior and junior A crowns, plus the 7-a-side A championship for the Loreto.

“It was unusual in that all three finals were against the same opposition,” Mr Williams pointed out. “That was hard on them. We knew they were a good team, and they played as well as we expected.

“Ours is a very attacking team. When we reverted to our normal formation nearing the end we scored a bit easier. The girls can remember this for the rest of their lives, and we would hope this panel would drive on and hopefully win a senior title in the future.”

Things never came easy to the winners. They were hit for a goal by the Presentation after only 40 seconds, when Olwen Rabbitte palmed the ball into the net.

After playing against the wind, the Loreto hit half-time trailing by 2-3 to 2-7. They continued to play with the gifted Emma Manogue as a most effective sweeper after the rest.

When turning into the final quarter, the arrears had swelled slightly to 2-10 to 2-5. That was after the deadly Sabina Rabbitte had tacked on three scores for Athenry against replies from strong ball carrier Asha McHardy (a free that struck the inside of the right upright) following a foul on the ever involved Chloe Delaney, and a beauty from Emma Manogue, after winning a great ball on the 50.

For all their drive and industry during this segment, the Loreto were finding it hard to make gains as Rabbitte (Sabina) retreated to bolster the tenacious Athenry defence.

On 46 minutes the winners’ industry paid dividends. Keher-Murtagh chased hard to win a ball on the left, inside the 20 metre line. She rifled an inch perfect pass into the middle to the advancing Asha McHardy. The Dicksboro girl made a good catch and shot the net from about 18 metres.

Athenry hit back for a point from Aisling Cronelly. The Loreto replied with an inspiring score, Amy Clifford, converted a testing free from 65 metres. Two minutes later Clifford did even better when shooting the point of the afternoon off her left at full pace from 50 metre (2-11 to 3-7).

Rabbitte (Olwen) and Keher-Murtagh, with an assist from Chloe Delaney, traded points before the Loreto struck for a point from Claire Doheny in the 57th minute after a midfielder, Rose Kelly, made a strong run through the centre and took a heavy knock as she released the ball.

With the tie all square - 2-12 to 3-9 - as the match drifted deep into additional time, it was all over to young Keher-Murtagh to leave her mark on final 2020. There was barely time for the puck-out after she scored.

While the late goal scorer stole the show, there were mighty performers all around - Asha McHardy, was a deadly striker who can be a hugely effective ball carrier; Claire Doheny, was a real dynamo; Amy Clifford, a fearless warrior; Emma Manogue and Kate McCluskey, were simply class hurler, plus Chloe Delaney, who was involved in a ton of productive work, as were Hannah Larkin and Eva Shefflin.

The Presentation made good use of the elements early on, and they showed 1-3 to 0-1 in front after 10 minutes. The losers, who operated with young Manogue as an extra defender, had their first point from Doheny that might have been a goal, the ball going over the top off the crossbar.

A smart ball from Shefflin ended up with Caoimhe Keher-Murphy palming her first goal in the 13th minute to halt the losers charge. When the latter goaled again in the 17th minute after inventive play between Clifford and McHardy, the gap was back to 1-5 to 2-1.

It was all square on 20 minutes after Shefflin pointed after taking a pass from McHardy (1-5 to 2-2).

Three scores from Sabina Rabbitte, to take her tally to 1-5 for the half, gave Athenry the advantage at the break: 2-7 to 2-3.
The Loreto continued to employ a sweeper after the turn, but late in the match when Athenry redeployed their star attacker in defence, the Cats countered by reverting to 15-on-15. A group whose instinct is to attack did the rest!

PS - Great camogie, but the presentation of what was a national final fell short. There were no linesmen/women on either side during the first half, and one umpire was assigned to each of the two goals throughout. Poor form!