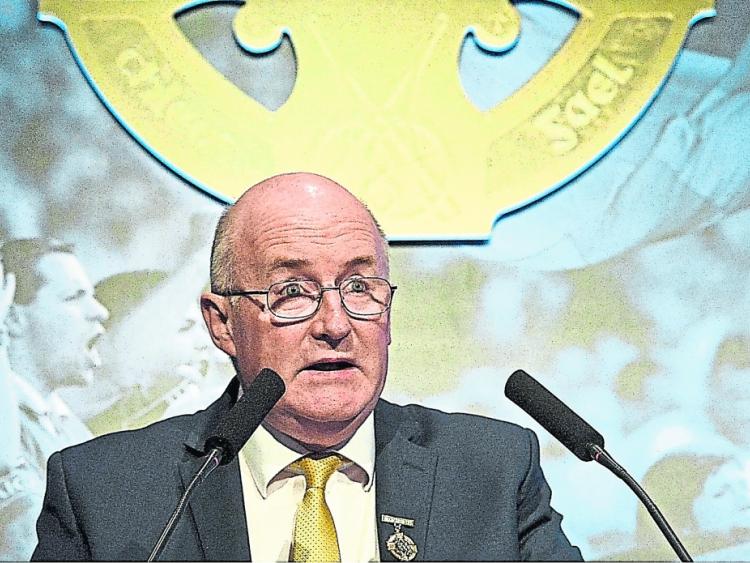 The GAA needs to become a fit for purpose organisation, and there will be a greater need for governance over everything the Association undertakes, President John Horan told delegates at annual Congress.

This will become a big issue in the coming years due to happenings in and around some counties.
Congress was told the GAA returns 84 cents out of every euro it takes in back through the Association (provinces, counties and clubs).

Revenue is likely to be lower by €6 million in 2020. There will be no Croke Park concerts due to the European soccer championships, bands are not touring and the GAA is not expecting draws in All-Ireland finals.

Public Liability Insurance is a growing problem for the GAA.

Over €8 million was paid out in claims in 2019 to non-GAA individuals or organisations who use GAA property. Clubs need to be much more vigilant, the President warned.

Growing costs of running inter-county teams, which is currently around €30 million per annum overall, is unsustainable and counties need to reflect on this.

In relation to the redevelopment of Páirc Ui Chaoimh, delegates were told that the remaining debt on the stadium was a matter for Cork.

The county will get no more funding from Croke Park.

The on-going challenge of balancing inter-county and club fixtures was acknowledged, but work is continuing to come up with better solutions.

The new Tier Two football championship winners will receive the Tailteann Cup (a new cup, the new name depicting the ancient Tailteann Games which were held in Croke just under 100 years ago).

The importance of implementing the Talent Academy Report was outlined.

The role of former Kilkenny trainer/coach, Michael Dempsey, who chaired the group, was acknowledged.

The GAA will commemorate Bloody Sunday (100th anniversary) on the occasion of the second Aussie Rules test in Croke Park.

A football game involving Dublin and Tipperary (wearing the same colour jerseys they wore in November 1920) and other events will be held.

Good progress was reported in GAA engagement with camogie and LGFA.

The new GAA Handball Centre in Croke Park will be available for use shortly, Congress was told.

Motions
* The sideline official can now bring matters (including disciplinary) to the notice of the referee (another pair of eyes watching matters).
This is not so relevant at club games in Kilkenny (and elsewhere) where a fourth official is generally only used in the latter stages of the main championships.
* Limerick’s attempt to have Hawkeye adjudicate on matters other than score detection was referred to the National CCCC for further consideration.
This is now a matter for former Kilkenny chairman, Ned Quinn and his committee.
* The Maor Foirne going out on the pitch to issue instructions to players survived by 1%, a very close call.
* Efforts to award two points for a ball going over the bar from a sideline cut failed.
* Efforts to have all adults club games extended to 70 minutes (from 60 minutes) failed.
* Efforts to have All-Ireland semi-finals which ended in a draw replayed failed.
As applied in 2019, extra time will be played with penalties to decide the outcome to enable a result on the day.
* All young players up to under-12 must now either have hurleys with no band or have the band taped over (apparently there was an incident in a county where a youngster suffered an injury).
* There will be no Black Card in hurling. This suggestion was heavily defeated - 18% for with 82% against.
Kilkenny spoke against and no one spoke in favour of the idea.
* Proposed change to the advantage rule lost by 1%.
* Efforts to have two designated players only speak to a referee during a game to query a decision failed narrowly.
Referees are not likely to be very happy. This is likely to reappear in the future.
* Motion to allow counties to determine their own underage grades, but subject to Central Council policy, won narrowly.
This motion had plenty of input and the outcome is that Central Council will now effectively tell counties what underage grades apply.
Right now they are under-13, 15 and 17 but counties may apply for under-14 and under-16, giving clear criteria why these two age groups are needed.
Kilkenny spoke in favour of this motion.
*Motion to allow CCCC to determine neutral venues for football Qualifier passed. This effectively means that Croke Park is unlikely to be considered a neutral venue for Dublin in the future.
* A new central group was established to monitor county club fixture programmes.
* Counties must now submit their annual fixtures programme to their Provincial Council by January 31 annually, and they in turn will forward it to the new Central Club Fixtures Committee.
This will be a big change for Kilkenny. It is now March and the 2020 club fixtures booklet has yet to be distributed to clubs.
Making all the draws at the annual county Convention might be on the cards from now on.
* A new national CCCC for handling underage games/discipline and so on is to be established.
This will take some of the work off the committee chaired by Ned Quinn (Mooncoin).