History in the making as Galmoy-Windgap win title 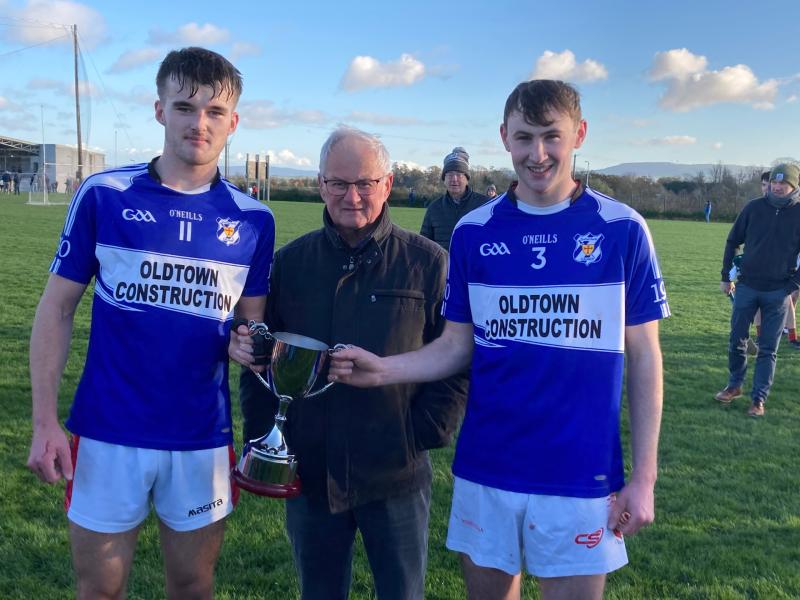 Bob Shortall, Junior Board, presents the Under-19 Roinn A Shield to captains Billy Drennan and Pauric Foley

A little piece of hurling history was made as Galmoy-Windgap claimed their first Roinn A title as an amalgamated team in sunny Gowran on Sunday.
Just three points separated the sides at the end of this enthralling Shield final. Six times the sides were level throughout this encounter, while no more than two points separated them at any of the intervals.
Galmoy/Windgap had a tonic start when Matt Delaney delivered a good ball in to corner forward Blade O’Gorman who turned his marker, sped to goal and despatched the sliotar to The Rower net after just 20 seconds.
Lively corner forward Tom O’Callaghan responded with a point immediately, before Kilkenny county minor Eoghan Lyng won a ball in the right corner and slammed past James Purcell to put his side in front. Midfielder, Eoin O’Brien added a Rower point from 40 metres as his side had now recovered from their sluggish start.
In the fourth minute, Billy Drennan took a pass from Matt Delaney to strike his first of 13 points. Eoin O’Brien (G/W) added a point from a very acute angle on the right hand side before Billy Drennan and Eoghan Lyng exchanged frees to leave the Rower ahead 1-4 to 1-3 at the first water break.
Galmoy/Windgap midfielder Callum Lonergan had a wonderful game throughout and the tougher the going became, the more this athlete loved it. In the 18th minute, he took a pass from Drennan to strike a point off his left. 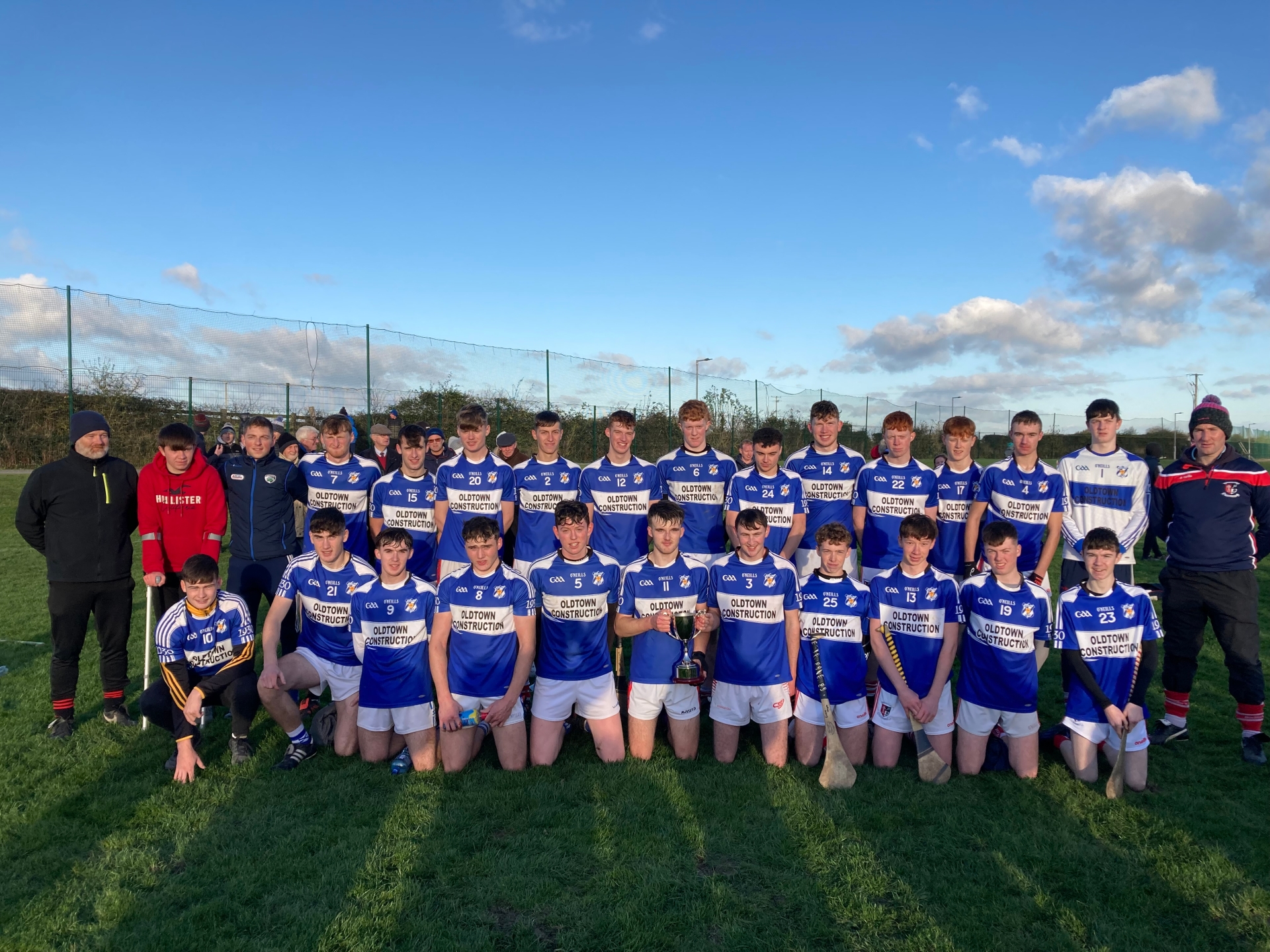 Eoghan Lyng responded from a free before the winners struck three scores in succession. Points from Billy Drennan and Blade O’Gorman sandwiched a classy goal from Lonergan. He won the sliotar from a melee 35 metres from goal, turned and set sail up the middle, before rifling a cracker to The Rower net.
These scores left Galmoy/Windgap four points ahead after 20 minutes (2-6 to 1-5). Eoghan Lyng then moved centre stage for the next 10 minutes. Like Lonergan, he exited from a ruck of players with possession and struck to the winners’ net. Three minutes later, he won a free out to the right of goal on the 20 metre line.
As he stood over the sliotar, all and sundry expected him to raise another white flag, but his low trajectory shot went all the way to the roof of the Galmoy/Windgap net. He added a pointed free, which drew a similar response from Callum Lonergan to leave Rower Inistioge ahead by 3-6 to 2-7 at half time. They were full value for their lead with impressive performances from Tom Cullen, Jack Morrissey and Eoin O’Brien, but the combined forces were about to post a reply.
And so it proved, as Galmoy/Windgap came out with fire in their eyes. Spurred on by the strong Sean Purcell, who was tremendous at centre back, Callum Lonergan and Billy Drennan, they took control for the opening stages of the new half.
Dominance
In the first seven minutes, Drennan struck four points, two from frees. With another score from young Billy Power and some hard work from Matt Delaney they began to exert their dominance on proceedings.
Ciarán Keher Murtagh pulled one back for The Rower. Their goalkeeper and captain Dan Mulholland then brought off a very good save from Mark McCoy which kept his side in the hunt. In the 38th minute Ciarán Keher Murtagh set off on a penetrating run from the right hand side before off loading to Tom O’Callaghan who buried the sliotar in the net to put The Rower one point to the good again (4-7 to 2-12).
Billy Drennan was now winning a lot of ball and two quick points from him saw his side back in front again. By the second waterbreak, Galmoy/Windgap led 2-16 to 4-8.
The final quarter was a fitting conclusion to a pulsating tussle with both sides pulling out all the stops. Drennan and Lyng exchanged frees once again, before Callum Lonergan soloed up the middle of The Rower defence to strike an impressive point. Craig Bolger had just been introduced for the southerners and he split the posts in the 54th minute.
The next three points all came from the stick of Billy Drennan, two of them being frees from out on the right hand sideline. This left Galmoy/Windgap ahead 2-21 to 4-10 as the game entered added time.
Those final moments saw the Rower throw absolutely everything into attack. They won two frees in quick succession which Eoghan Lyng pointed, but try as they might, their final attacks were thwarted by a resolute Galmoy/Windgap defence, where Padhraic Foley, Gearóid Phelan and David Sherman defended heroically.
Bob Shortall from Kilkenny Junior Board presented the winning trophy to Galmoy/Windgap’s Padhraic Foley and Billy Drennan, to record a first ever Roinn A title at any level for two sides who have been amalgamated since 2006.
Galmoy/Windgap: James Purcell; Sean Barron, Pauric Foley, Jack O’Shea; Gearóid Phelan, Sean Purcell, David Sherman; Matt Delaney (0-1), Callum Lonergan (1-3); Billy Power (0-1), Billy Drennan (0-13, 0-7 frees), Adam O’Shea; Eoin O’Brien (0-1), Mark McCoy, Blade O’Gorman (1-2). Subs: James Darcy, Daniel Hanrahan.
Rower-Inistioge: Dan Mulholland; Tiernan Morrissey, Tom Cullen, Oisín Whelan; David Prendergast, Ruaidhri Delaney, Jack Morrissey; Eoin O’Brien (0-1), Michael Moffitt; Ciarán Keher Murtagh (0-1), Fiachra Farrell, Mark Flood; Eoghan Lyng (3-8, 1-8 frees), Darragh Bolger, Tom O’Callaghan (1-1). Subs: Conor Bolger, Cathal Langton, Craig Bolger (0-1).
Referee: Colin Tobin (Young Irelands)