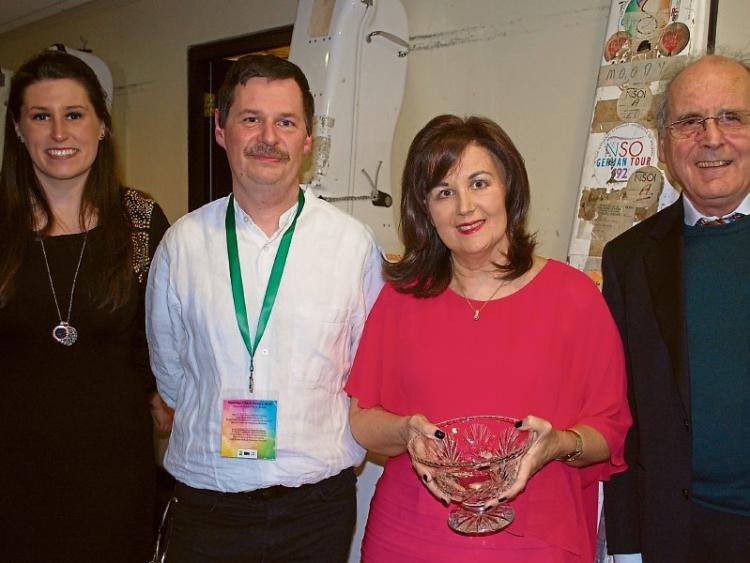 Gina O’Leary of St. Canice’s Co-Ed National School was presented with the 2016 Agnes O’Kane Award at the IAYO 21st Festival of Youth Orchestras at the National Concert Hall last week.

The prestigious, annual award recognises the vital contribution made by an individual in the growth of youth orchestras and youth music over the last 30 years.

Reading the citation to Gina, Sean Rock of the Irish Association of Youth Orchestras (IAYO) said that everyone, who is successful in life, talked about the one teacher that made a difference during their schooldays.

“And the winner of this year’s Agnes O’ Kane Award for 2016 is one of those teachers whose vision and whose tireless energy has given so much and to Kilkenny in general and to St. Canice’s school in particular. “Her work has already been recognised at local and at national level-but the only reward that this woman has ever sought I think it would be safe to say is the joy of the music she has imparted and given to her young pupils,” Mr Rock said.

“It is a great privilege to have this woman at the table this evening. She has been in ill-health recently but she has not let it stop her from being here with us,” Mr Rock added.

Gina who was accompanied by her daughter, Ruth, who is continuing the work Gina started in St Canice's Co-Ed, received a standing ovation when she went on stage.

Through the St Canice's school music programme, Gina introduced hundreds and hundreds of children to classical music as well as facilitating their participation in jazz, modern and other forms of music.

She retired last year but her love of music has kept her busy even in ill health.

Gina O’Leary’s own musical journey began in the St John of God Primary School where music was a very important element of school life. She studied violin and piano and was a member of the school orchestra. It was there that she developed a passion for music that was to shape hers and so many children’s and adults lives for years to come and long into the future. Mother Venard (Sister Maureen O’Flanagan) from St John of God and Mother Celine Dempsey from Loreto were both inspirational behind what has now become one of the most important music programmes in the country.

Gina O Leary is synonymous not just with music in Kilkenny, but also at national level for her pioneering role in promoting music for children at national school level. The programme has been recognised throughout Ireland as a model for other schools to follow.

As Artistic Director of the programme, Gina has promoted access to music for all children and fostered and developed musical talent in the school.

Though her incredible enthusiasm, good humour, foresight and sheer passion for music, Gina has made the programme what it is today, not just in its award winning record but through the sense of achievement gained by children from playing music.

There have been many achievements by the young musicians involved in the music programme since it was begun in 1983 by Gina and Peggy Carey; winners at Feis Ceoil a record breaking twenty two times, countless successes at Wesley College and Kilkenny Music Festivals and of course the individual success enjoyed many former members of the programme who have gone on to become successful professional and amateur musicians.

In June 2012 Gina was awarded a special Mayoral award by Kilkenny Mayor David Fitzgerald in recognition of her voluntary role in developing and promoting the Kilkenny Music Festival and for promoting music in the city. In February 2014, Gina accepted a Special Achievement Award from the Irish Association of Youth Orchestras (IAYO) in recognition of 30 years of music by St Canice’s Instrumental Music Programme. .

Gina's greatest accolade is that she makes music engaging and fun for all. She teaches children from an early age the importance of playing together as a group, while at the same time appreciating the enjoyment and self-achievement to be gained from playing music. Gina is a force of nature, always seeking to improve and innovate, never content to simply “make do”, always striving to bring out the musical potential in each child. .