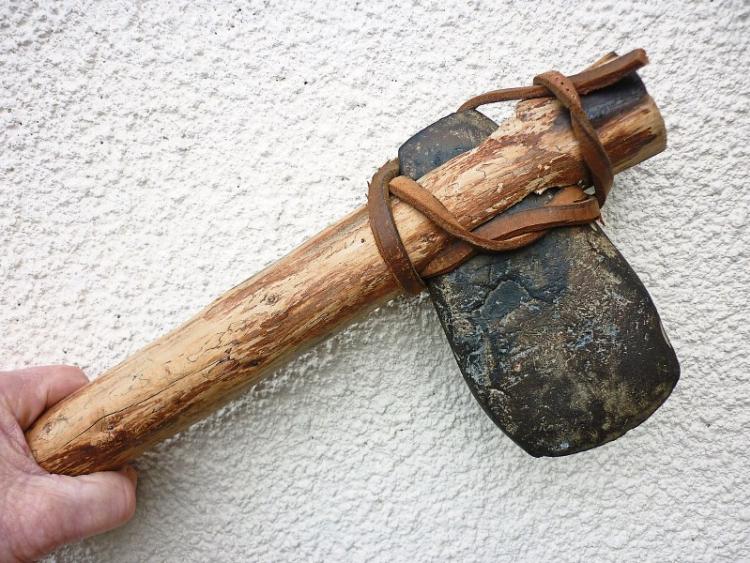 A farmer who is also a man of letters discovered a “neolithic weapon” on his farm some years ago that has sparked huge debate among academics and now for the first time he has gone public on the story.

Michael Holden, Castlegarden, Thomastown (near Kilfane) was mending a stone wall knocked by cattle when he noticed, scattered among the debris, a dark object of distinct design, different from the rest of the rubble.

Michael, who is the author of, Freney the Robber: The Noblest Highwayman in Ireland, had been introduced to such objects while attending De la Salle secondary school in Waterford.

After dusting off the piece, he discovered a beautiful shiny surface.

He made contact with local woman, Ellen Prendergast from Clara who was attached to the staff of geological section of National Museum of Ireland. Ellen took the axe head to the museum for inspection and it was assessed by Mr Nigel Monaghan, the assistant keeper of Natural History division.

He described it as being made of siltstone, a type of rock found under the Castlecomer plateau and the Shannon area of county Clare.

Neolithic man chiseled a piece of rock that was easy to shape yet durable to endure the hardship of everyday use.

The stone axe was used to cut and split timber and to make barricades for the area where they lived.

They were used to hew out the centre of tree trunks to make canoes. They were also used to fend off enemies and kill animals.

The axe head found by Michael has plenty of chips and indentations, testimony that it was used a lot but for what exactly we will never know and as always with finds like this it raises as many questions as it answers.