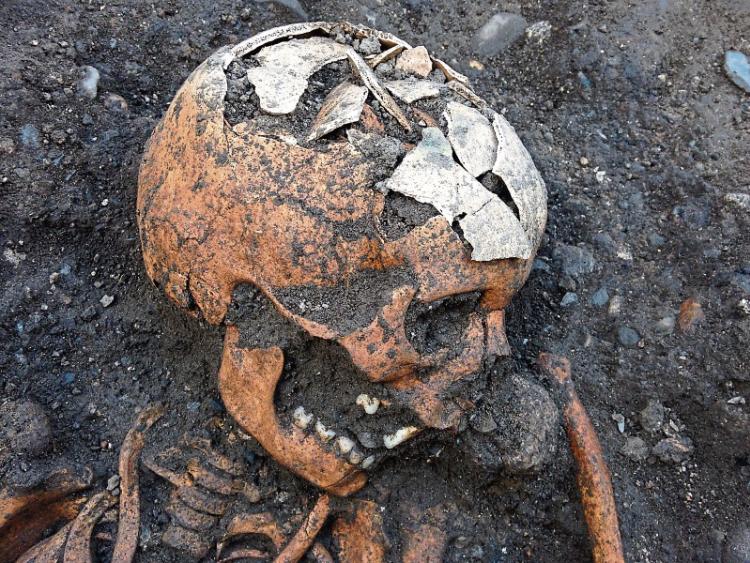 Kilkenny Archaeological Society decision to move last Wednesday’s lecture from their headquarters at Rothe House to the venue offered by Springhill Hotel was richly vindicated by the capacity crowd of over 200.

They turned up to hear an informative, knowledgeable and inspirational address by the Kilkenny man, Cóilín O Drisceoil who headed up the committed team of archaeologist who have spend the last 18 months seeking to role back the centuries of history within and surrounding this early parish church in the centre of Kilkenny City.

Supported by a suitable range of well taken images the lecture, lasting some 90 minutes held the large audience spellbound. At its conclusion there was long and sustained applause.

It signalling perhaps both their appreciation for the presentation and their excitement at the vista Cóilín projected for the future of what will be the main element in the city’s Mediaeval Mile project.

Cóilin outlined the history St Mary's, placing it in its national context. St Mary's church was built on the site of the great Anglo-Norman conqueror Strongbow's chapel by William Marshal and his wife Isabel de Clare in the year 1200.

It was the chief church and burial ground for the city throughout the Middle Ages and was one of the largest parish churches in medieval Ireland, second only to Saint Mary’s New Ross.

It remained a place of Christian worship until 1951, after which time it was transformed into a parish hall.

In 2009 the church and its surrounding graveyard was bought by Kilkenny County Council, who have since then being carrying out a major conservation project to facilitate its rebirth as the city's new 'Medieval Mile Museum'.

He then went on to describe Kilkenny Archaeology's excavations at St Mary's, which have been ongoing for 18 months on behalf of Kilkenny County Council and Duggan Brothers contractors and which are now drawing to a close.

The excavations carried out for the new museum have been the most extensive ever undertaken at an Irish parish church and have produced the most spectacular archaeological discoveries ever made in Kilkenny.

A treasury of new medieval tomb sculptures have been uncovered buried just half a metre beneath the modern floor of the church, including a beautiful double-effigy dating to the 14th century and finely-carved 16th century altar tombs inscribed with the names of some of the great Kilkenny families of the middle ages such as the Rothes, Archers and Shees.

And not only that, their private burial-chapels into which the tombs were placed still survive largely intact along with their paved floors, walls and altars.

The church is a honeycomb of burial vaults and inside them timber and lead coffins have been recorded along with the remains of numerous men, women and children. An interesting point about the vault-burials is the fact that many had been treated with lime, to speed up the process of decomposition; this was probably an attempt by the church authorities to tackle the dreadful smell that must have filled the church.

The earliest burial found was that of a child who was buried beneath the foundations of the William Marshal church, and which radiocarbon dating allows us to associate with Strongbow's first chapel on the site.

A group of 13th-14th century skeletons excavated at the Saint Mary’s lane entrance to the churchyard proved incredibly interesting: they had the tell-tale marks on their bones of having lived short, brutal and difficult lives and were almost certainly some of the poor of the Anglo-Norman town.

One teenage girl had a severe rupture in her lower back caused by years of heavy lifting, probably in domestic servitude, and beside her was the remains of a two-year-old child that had died from malnutrition.

Another adult, burial had a severe cut-mark on his skull, probably caused by a blow from an axe.

Around 4,000 artefacts were also discovered including a large collection of coins, a jewelled cuff-link, pottery from France and the Netherlands, and even a rifle and musket that were stashed beside one of the Rothe tombs during the war of independence!

The excavations have been a once-in-a-lifetime experience for Cóilín and all the team and he described how it has been an amazing privilege to have been given the opportunity to work at St Mary's. He took the opportunity to warmly thank Kilkenny County Council and Duggan Brothers who are funding the work and all of the many people who have visited the excavations and everyone who attended the talk'.

The new museum will showcase many of the archaeological discoveries and the team are currently in the process of carrying out the detailed cataloguing and analysis of the excavated material for publication.