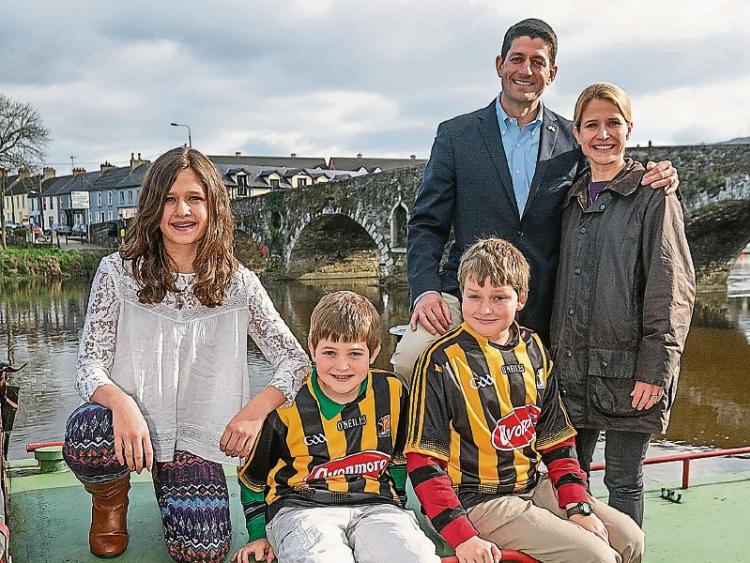 Paul Ryan and his family pictured on the backs of the Barrow in Graignamanagh.

Paul Ryan's descendants came from Graignamanagh, and he has come to visit his relations in the picturesque and medieval Kilkenny town.

Following the ongoing bizarre behaviour of US Republican presidential candidate, Donald Trump, which has seen unprecedented scenes of hatred and bigotry, one 'Kilkenny man' has called time on the reality TV star.

Paul Ryan, who is The Speaker of the House of Representatives and the top elected Republican in the US has said he can no longer defend Mr Trump's behaviour.

He told fellow republicans to “cast him adrift” to try and save their own seats in the US Congress elections held on the same day as the presidential election.

Mr Ryan, who visited Graignamanagh last year and regards himself as a Kilkenny man, is the only top Republican leader to face-down Trump whose bully-boy tactics and antics have given him huge TV ratings.

Ryan, who is seeking re-election himself, dealt Trump a withering blow on Monday, telling fellow Republicans he will no longer defend Donald Trump and will instead use the next 29 days to focus on preserving his party's hold on Congress.

"He is going to spend the next month focused entirely on protecting our congressional majorities," Ryan's spokeswoman, AshLee Strong, said in a statement.

The move, a first in US political history, laid bare the seemingly intractable divisions now seizing the Republican Party with a month left before the presidential vote.

Support for Trump among the Republican establishment, already weak amid disagreements over policy and tone, has now eroded to new lows.

In a conference call with members Monday morning, Ryan told lawmakers, "You all need to do what's best for you and your district.”