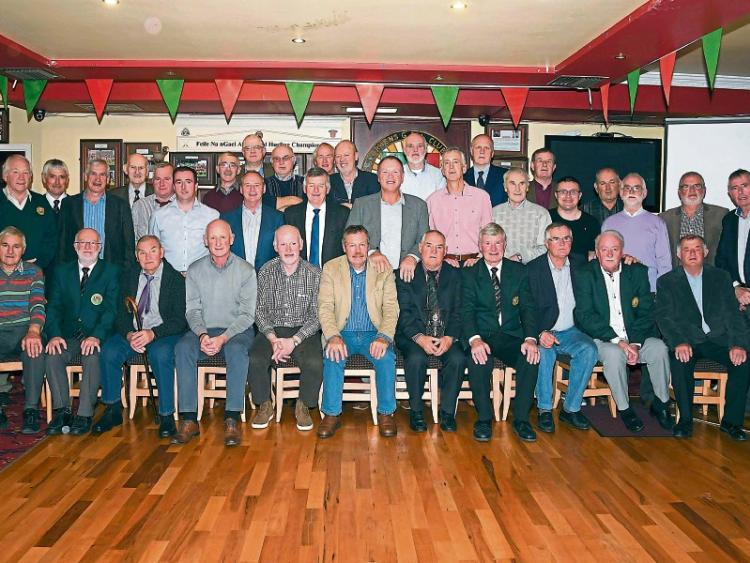 James Stephens, members of the 1975 and 1976 hurling and football panels with club officials and guests.

Forty years on from James Stephens’ first senior club All-Ireland title win, the players from that historic 1976 victory gathered at the Larchfield clubhouse with guests and former foes to remember their victory, and probably more importantly, recall a great team, a band of brothers that many consider one of the greatest club teams anywhere, anytime.

Captained by Phil ‘Fan’ Larkin and trained, managed and selected by Georgie Leahy, Liam Tyrrell’s roll call of players from that era was jaw dropping.

Liam set the background to the club’s success, starting with juvenile honours, before James Stephens won its first senior title in 1969.

They went on to beat Galmoy in the 1975 senior county final to set up their All Ireland winning campaign.

They became the first Kilkenny club to win the Leinster championship, beating Buffers Alley, St Vincent’s and St Rynagh’s on the way.

They qualified for the decider in Thurles against Blackrock ( Cork), a great club who were represented on Friday night by Eamon O’Donoghue and Pat Moylan.

In testing conditions, The Village won the All-Ireland by 2-10 to 2-4.

The same year, with all their hurling success, they captured the county senior football title and represented Kilkenny again, losing out to Meath champions Walterstown having missed a late penalty. The Meath men went on to win the Leinster final.

Speaking on behalf of the team, ‘Fan’ thanked the Blackrock hurlers for attending. He recalled chats with Georgie Leahy before games, times when he thought he had a handle on the team to be picked, only for Georgie to change it.

But he “always got it right on the big day”, Fan admitted. He also remembered the late Bill Cody, who he described as “a driving force behind our team”.

Presentations were made to Fan Larkin and Georgie Leahy on the night. Club chairman Tommy Lanigan produced a slideshow of memories for the players, one of whom, Niall Morrissey, was back from Australia.

The club also remembered players who had passed away - notably Michael Leahy, who scored a goal in every game en route to the All-Ireland success, Paddy Larkin and Josie O’Brien.

They also remembered the Costello family, who suffered a bereavement at that time.

Georgie Leahy was ahead of his time, being the sole manager and selector of the team. That feat has never been matched!