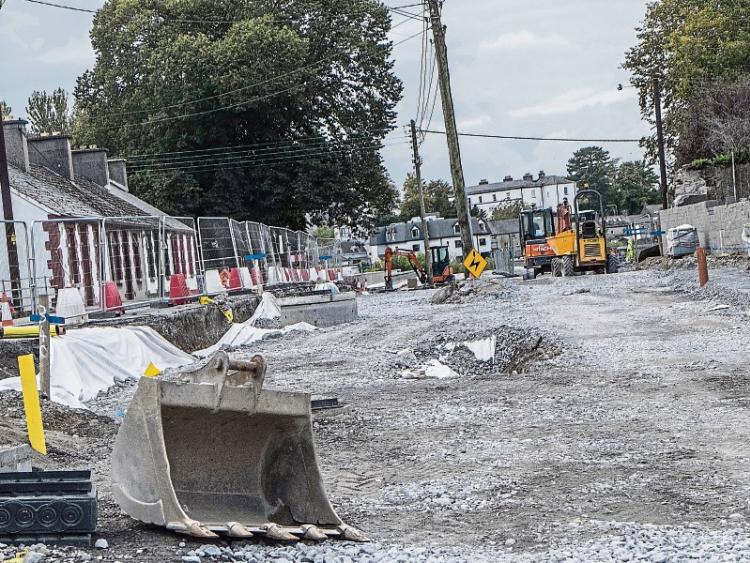 Traffic problems are continuing to plague the residents of Wolfe Tone Street in Kilkenny City, with the closure of part of the road and restrictions in place due to ongoing works on the Central Access Scheme.

Construction work is ongoing between the hours of 7am and 10pm. Access is being restricted to local residents on the lower part of Wolfe Tone Street, Michael Street and Green’s Bridge Street until October 24, and no through traffic is being permitted.

However, residents have repeatedly expressed their concern over the security of the site, the hours at which the work is being carried out, and accessibility issues. A video was posted online last week showing fire services impeded on the street.

The Order of Malta, which is currently based at the former auxiliary hospital, has also confirmed that one of its vehicles was damaged whilst attempting to navigate through the area.

The issue was raised by local councillors at meetings on Monday afternoon.

“What is going on in terms of emergency vehicles,” Cllr Joe Malone asked director of services Tim Butler.

“I was over there – and to be honest, the site wasn't safe. You could walk out on to the Castlecomer Road. Could we maybe have an update? There's a lot of people talking about it.”

Cllr Malcolm Noonan said there had recently been an incident where an ambulance was required on Michael Street, and people there were concerned.

Mr Butler said that, unfortunately, the work on Wolfe Tone street is quite disruptive for residents. He said that the contractor had been on to fire and ambulance services, and they were happy that they were able to access the area.

“I know there were breaches of some of the fences that have been erected,” he said.

“Extra efforts have been made to secure the site, while ensuring access is still possible.”

“Is there anything more we can do to alleviate the fears of residents?”

Cllr David Kennedy said he had worked on sites for many years, and the current situation was far from satisfactory.

“It should be secured or someone will get hurt,” he said.

Cllr Andrew McGuinness said he had concerns in relation to noise and hours of operation on the site.

“The problem is that issues have mounted up and it seems to have escalated,” he said.

“The problem is the construction works and the level of concern. Operating heavy machinery in or around midnight is totally unacceptable.”

“The fencing on Wolfe Tone Street is poor. The signage – it should be clearly highlighted and there is a genuine health and safety risk to residents and those going into the area.”

Mr Butler said the safety of the site was the responsibility of the contractor, and that he was not aware who its health and safety officer is.

“I know they don't have security on the site, but they do check it regularly,” he said.