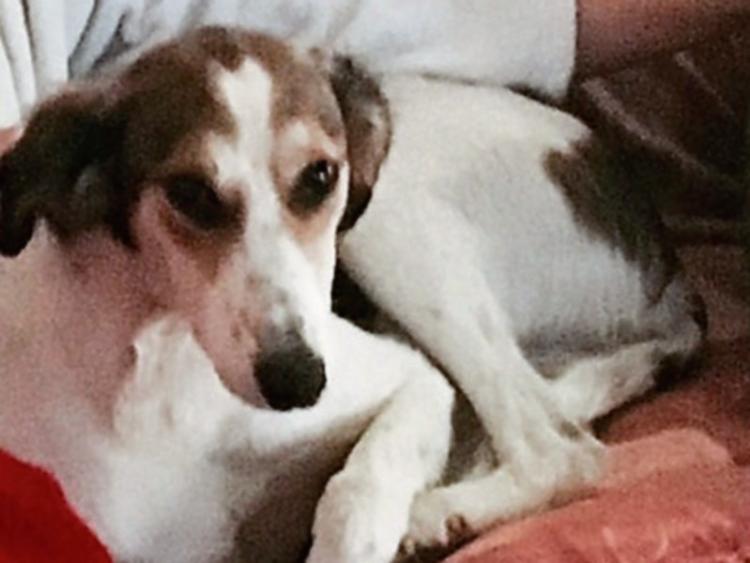 Seamus is a brown and white lurcher.

A dog who was rescued from a state of near death and cared for as a cherished pet was cruelly stolen from his adopted home last week.

Seamus, a lurcher, was taken from his new home in Desart, Cuffesgrange in Kilkenny last Friday, October 14. His pen and dog house where he slept were torn apart by the heartless thieves who took him.

Seamus was found months ago by a lady near the Desart Woods. He was in a poor condition – dehydrated, starving, and covered in wounds and mange.

She brought him to Callan Veterinary Clinic, where veterinary nurse Tara Roche cared for him.  After two weeks of providing him with constant medical attention and TLC, Tara couldn’t bear to see the gentle and trusting hound shipped off to the pound.

She decided to adopt Seamus and bring him home. Her other dog, Tiva – a 45kg American Akita – also quickly fell in love with him, licking his wounds until he was strong enough to play.

For some time, Seamus accompanied Tara to work. But eventually he decided he was not a fan of the vets, and so Tara and her partner decided to make him a large purpose-built pen, complete with a six-foot high security fence.

The clever dog still proved a handful. He managed to escape his pen to the point where Tara eventually had to ‘Seamus-proof’ it. A roof was put on the pen so he couldn’t climb the fence; the gate was double-locked and the steel fence reinforced with wood and cement blocks.

“It was like Fort Knox – we thought he was safe,” says Tara.

“The pen had been ripped apart, the bolts and nails were sheared, the cement blocks removed, and the wood torn apart,” says the veterinary nurse.

“Even his dog house was destroyed – we think he was probably trying to hide.”

Since then, no one has seen Seamus, and appeals for information have proven fruitless. The only possible information they have is that barking was heard around 3-4pm on the day, so he may have been taken around then.

Seamus’ pen was in view of the Ballymac-Cashel/Ballingarry Road around 1.5km from Ballymac Cross on the next junction on the right-hand side.

Seamus is a brown and white lurcher. Anyone who has seen him, who may have seen something in the area last Friday, or has any information can contact Tara on 085-8381900.