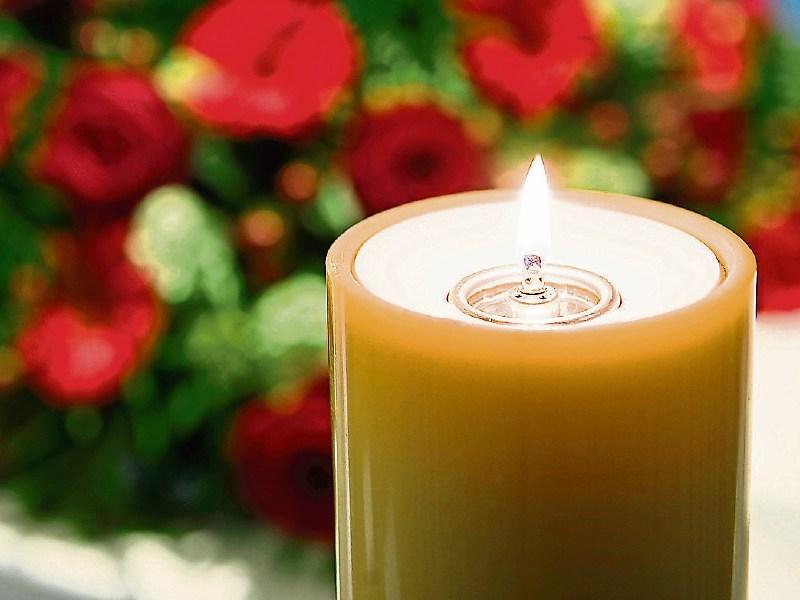 Late of Kilkenny. Reposing at the Holy Family Funeral Home, Mervue on Friday (28th October) from 6 o'clock. Removal at 7 o'clock to the adjoining Church. Funeral after 10 o'clock Requiem Mass on Saturday (29th October) to the New Cemetery, Bohermore.

Reposing at her home on Thursday, October 27th, from 2pm with prayers at 8:30pm Removal on Friday, October 28th, to St. Kevin’s Church, Carrigeen arriving for Requiem Mass at 11:00am followed by burial in the adjoining cemetery.

The death has taken place of John Kelly, Carrigeen, Johnswell, Kilkenny.
He died peacefully in the loving care of Anna and Staff at Archersrath Nursing Home. John, predeceased by his wife Mary, deeply regretted by Jimmy and Marsha Kelly Carrigeen, John's nieces and nephews, grandnieces and grandnephews, relatives, neighbours and friends.

Reposing at his home, Carrigeen, Johnswell. Funeral Prayers on Friday morning at 10.15am followed by removal to the Church of St. John the Baptist, Johnswell for Requiem Mass at 11am. Burial in St. Kieran's Cemetery.

Reposing at his residence from 8pm on Tuesday with rosary at 8pm on Wednesday evening. Removal on Thursday morning to the Church of the Assumption, Thomastown, to arrive for 12 noon Requiem Mass, followed by interment in St. Mary's New Cemetery, Thomastown, Co. Kilkenny.

Reposing at his residence from 3pm on Wednesday with Rosary at 7.30pm. Funeral prayers on Thursday morning, followed by removal to St. Colman's Church, Clara for Mass at 11am. Burial afterwards in the adjoining cemetery. House private on Thursday morning please.

Reposing at Nick's Residence in Corbettstown from 2pm on Wednesday. Vigil Prayers and Rosary on Wednesday night at 9pm. Removal to Saint Joseph's Church, Ballyfoyle on Thursday for Requiem Mass at 1pm followed by burial in the adjoining cemetery. Family Time on Thursday morning.

Reposing at his residence on Wednesday from 3.30pm to 7.30pm. Removal on Thursday to St. Senan's Church Kilmacow for Requiem Mass at 11.00am. Burial after in adjoining cemetery. Family flowers only please, donations to Cancer Research. House private on Thursday morning please.

Resposing in Power's Funeral Home, Ferrybank. on Tuesday, October 25th from 7.30pm with prayers at 8.30pm. Removal on Wednesday morning October 26th to St. Paul's Church, Bigwood. arriving for Requiem Mass at 12 noon followed by burial in the adjoining cemetery.

Betty will be reposing at Molloy's Funeral Home, Callan, Co. Kilkenny on Tuesday 25th October with Rosary and Vigil Prayers at 8pm. Funeral Prayers on Wednesday morning followed by removal to The Church of the Assumption for Requiem Mass at 11am. Burial immediately afterwards in Kilbride Cemetery, Callan. Family Flowers only, donations, if desired, to The Alzheimer Society of Ireland.

The death has taken place of  Sr. Francis O’Neill (Convent of Mercy, Our Lady of Lourdes Hospital, Rochestown Avenue, Dun Laoghaire, Co. Dublin, late of Clough, Castlecomer, Co. Kilkenny) October 23rd, 2016, in the loving care of the Sisters and Staff of Catherine Mc Auley House, Beaumont; sadly missed by her community in Rochestown Avenue, the Sisters of Mercy, South Central Province, her brothers John, David and Andy, sisters-in-law, brothers-in-law, nieces, nephews, grandnieces, grandnephews and especially Maureen. Pre-deceased by her sisters May, Lettie, Sadie and Josephine and her brothers Pat and Tom.

Reposing at the Convent in Rochestown Avenue from 3pm Tuesday October 25th with Rosary at 4.45pm. Removal of remains from Convent to Our Lady of Lourdes Hospital Chapel at 10.40am on Wednesday October 26th for Funeral Mass at 11am followed by burial at the Community Cemetery, Inchicore.

The death has taken place of Paddy Doyle, Blanchfields Park, Clifden, Kilkenny and late of Hacketstown Co. Carlow died suddenly at his home on the 22 October 2016. Survived by his loving daughters Aileen and Martina. Reposing at his residence from 7 o clock Monday evening with rosary at 9 0 clock. Removal on Tuesday morning to Church of the Assumption Gowran for 11 o clock Requiem Mass. Burial afterwards in the adjoining cemetery.

Reposing at her residence from 10.30am on Sunday morning with Rosary at 8.00pm. Removal from her residence Monday morning to arrive at Saint Fiachra's Church Clontubrid for Requiem Mass at 12.00 noon. Burial immediately afterwards in the adjoining cemetery.

House private Monday morning. Family flowers only please. Donations if desired to the Parkinson's Association and the Alzheimer's Association.

Reposing at her brother Harry Matthews' home, Miltown, Kilmacow, on Sunday October 23rd from 3pm with prayers at 7pm. Removal on Monday October 24th to St. Columbus’ Church, Rosses Point, Sligo, arriving for 5pm. Requiem Mass on Tuesday October 25th at 10.30am, followed by burial in the adjoining cemetery.

Fr. Richard Lawrence Somers, 76, passed away peacefully on Wednesday, October 19, 2016, at St. Catherine's Retirement  Village, Missippi, U.S.A.. He was born in Clogh,  on August 8, 1940, Son of the late, Richard and Mary Somers. he was fifth of six siblings, two sisters Teesie and Peggy and three brothers Paddy, Eddie and Frank. He attended the local National school, after which he went on to  St. Kieran Cullege in Kilkenny City in 1954. From there he moved on to the  Seminary at St. John's in Waterford, where he completed his philosophy and theological studies. While in St.Kierans, Fr.Richard won an All Ireland colleges hurling medal in 1059 on the same team as Eddie Keher, Fr. Somers was ordained for the Diocese of Natchez-Jackson in June 12, 1966. He arrived in Jackson in September 1966 and shortly thereafter took up his first assignment at Our Lady of the Gulf in Bay St. Louis. He also served as an Associate Pastor at Our Lady of Fatima, Biloxi, and Sacred Heart, Hattiesburg, and St. Patrick, Meridian. In 1975 he became Pastor of St. Therese in Jackson and from there moved across town to be Pastor of St. Richard. His final assignment was at St. Joseph in Greenville where he spent sixteen years, which was his longest tenure.

Fr. Somers retired for health reasons on February 1, 2012 and in December he moved into St. Catherine's Village. His almost fifty years of service has left a lasting impression on the church in Mississippi. His infectious optimism touched the lives of many people because of his enthusiasm, his energy, his faith and his great love of the Catholic Church. He was preceded in death by his parents; his brother, Eddie; and his sister, Peggy. He is survived by his brothers, Paddy and Frank; and his sister, Teresa.

Fr. Somers will be greatly missed by a large number of people. In lieu of flowers, memorials or financial donations may be made in Fr. Somers name to St Joseph Catholic High School, 1501 VFW Road, Greenville, MS 38701.
(Published in Clarion Ledger on Oct. 21.)

Kitty will be reposing at her son Peter's residence, Lemonstown, Kilmoganny with Rosary and Vigil Prayers at 8pm on Saturday evening. Funeral Prayers on Sunday morning followed by removal to St. Eoghan's Church, Kilmoganny for Requiem Mass at 1pm. Burial immediately afterwards in Kilmaganny Cemetery.

Family flowers only please. Donations in aid of the Alzheimer's Association to offer support to the person with dementia and family at the early stages of the illness when the person is living at home.