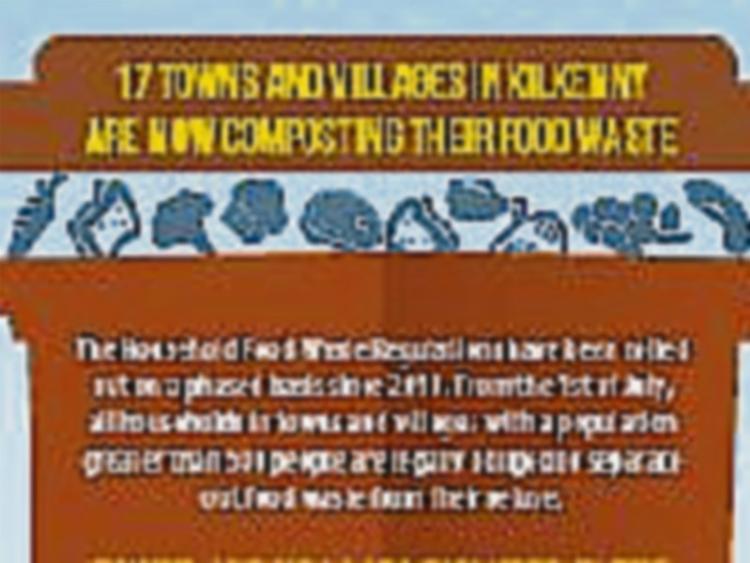 Councillors are highlighting their constituents' concerns over the cost and feasibility.

Local councillors have raised concerns over the rolling out of new food waste regulations into Kilkenny's rural towns and villages.

At Monday's meeting of the Castlecomer Municipal District, the elected members highlighted their constituents' concerns over the cost and feasibility of the new system.

The rules were extended to include 17 areas somce July but a temporary extension was granted. Theareas now include Ballyragget, Bennettsbridge, Castlecomer, Freshford, Urlingford Gowran, Kilmacow, Moneenroe, Mooncoin, Paulstown, and Piltown.

There will be exemptions in some cases, such as where there is no space for a bin, a lack of access or availbility of refusal collection services.

“If there is not someone coming to your door, you still need to separate food waste,” said environmental awarenss officer Bernadette Moloney.

If people go to their collector and are refused a bin, they need to contact the local authority and inform them.

Cllr John Brennan said he had a number of concerns.

“The existing contractors – they're not engaging with the people who are going to be affected,” he said.

“How much is it going to cost? There's a lot of people who are just not going to be able to pay the new charge up front. And – will they be able to handle a bin? There are Old Age Pensioners and elderly people.

“The contractors will have to come on board and inform people what's going on. What we don't want is the system being abused, and people dumping all over the countryside. I have to say, I have a lot of concerns over it.”

Cllr Mary Hilda Cavanagh said she could not imagine the people of rural Ireland gathering up potato skins and driving to Dunmore.

Ms Moloney said that the food waste bin was a cheap option for householders to avail of.

Cllr Maurice Shortall asked if Ms Moloney was saying that people are supposed to be going to contractors and asking for brown bins.

“There is not one brown bin in north Kilkenny,” he said, adding that the next meeting of SPC 2 (Environment) should be opened to all members to discuss the issue. Cllr Cavanagh asked what the penalties would be for householders who are non-compliant.

Ms Moloney said the council wouldn't be chasing householders first, but rather the service providers.

“We have been very nice to date, but if we have to get tough, we will,” she said.

“We really need to get people aware – we want to raise awareness that people should be using a brown bin.

“But we will tackle providers first,” she said.

Cllr Brennan said that if someone was using the bags, and has never used a bin before, was one brown bin enough for them or would they need two more extra bins.

“You're looking at someone who has never had bins before who now has to have three bins?”

Ms Moloney said this was correct. Cllr Brennan said that potentially someone could be facing a new bill of €300.

“You're looking at a huge increase – people are going to have to pay 90% more than what they were paying,” he said.

Cllr Maurice Shortall said there seemed to be a difficulty in getting service providers to engage. Cllr Pat Fitzpatrick said the issue needed to be referred to the SPC for a full discussion, with all councillors involved.

Cllr Brennan asked about the possibility of a further exemption, and said the SPC should formally write to the Department to ensure people would have enough time to fully understand what is happening.