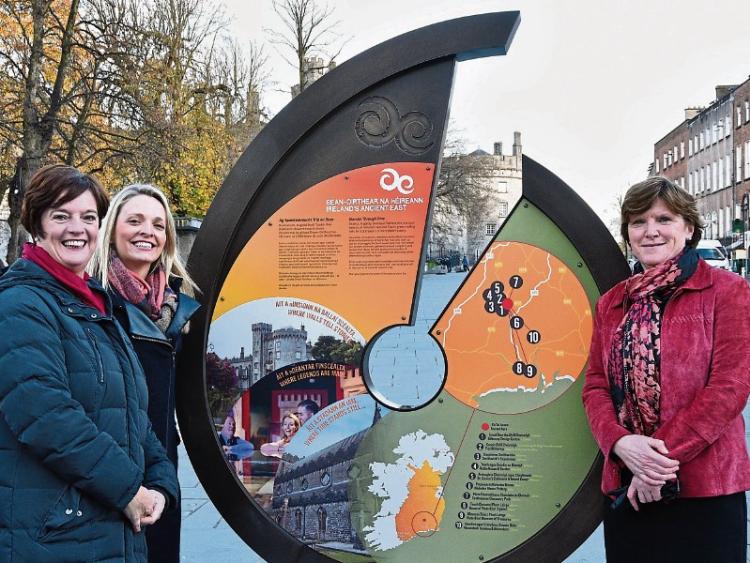 The signs are part of a multi-signage programme envisaged for Ireland’s Ancient East with similar branded orientation signage expected to be in place at 80 key sites throughout the region by the end of this year.

Shaped as a large spiral wheel, each branded sign highlights a range of sites within up to 60 minutes’ drive away from the sign location to encourage visitors to extend their stay and visit more than just the primary sites.

Fáilte Ireland’s Head of Ireland’s Ancient East Jenny De Saulles says that the signs will encourage visitors will slow down, explore the region and stay overnight.

“We want to transform Ireland’s Ancient East from a transit zone to a touring zone by increasing visitor dwell time in the region,” she said.

“Kilkenny has a big part to play in our plans and these signs work to that objective and will, we hope, encourage visitors to explore the rich variety of all Kilkenny can offer.”

However, the signs have not found favour with everybody here. A number of locals have criticised them, pointing to their scale and design, and questioning whether their location is appropriate in some cases.

Local councillor Malcolm Noonan has previously described the signage as 'gaudy', and said the development of ‘public realm plans’ should be mandatory for every town and city in Ireland.

“Local people here in Kilkenny are quite rightly annoyed as this signage appears on already cluttered streets; where there are three or four different styles of directional signage and no apparent coherence to it all,” said the Green Party councillor.

“We think that Failte Ireland should be subject to the same planning requirements as any private developer and not be exempt from erecting signs of this scale with no public input.”