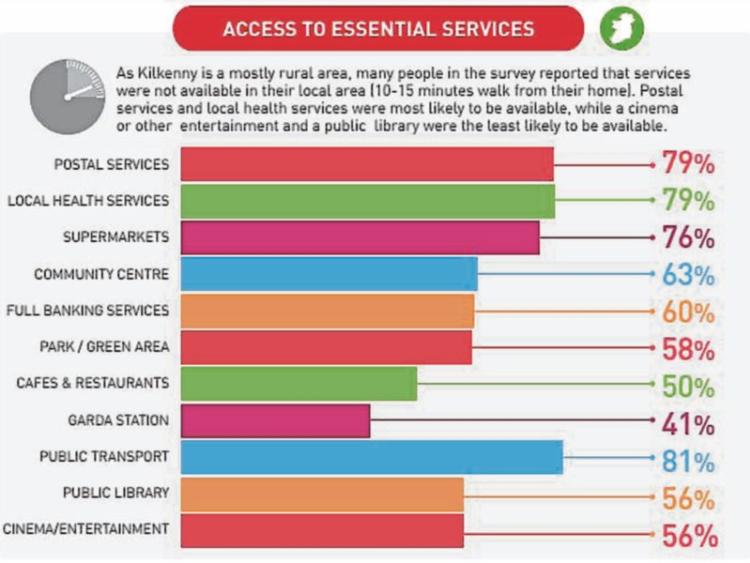 Census data and statistics are consistently showing us one clear trend: The population of Ireland, and Kilkenny, is ageing.

The Kilkenny Age Friendly County Strategy 2017 - 2022 sets out targets for this county over the next five years, with a view to supporting active and positive ageing. Eight themes have been established by the World Health Organisation as the basis for consulting with older people, and Kilkenny's strategic plan has used them as a framework.

Just over 70% were satisfied with paths and pavements compared to 60% in other areas. Exactly half of those surveyed in Kilkenny reported dissatisfaction with access to public toilets.

Action/outcomes: Kilkenny's planning and design policies will continue to be inclusive of age-friendly designs and consistent with best practice. Successful initiatives like older persons' parking spaecs and seating will be furthered, while all available toilets in public buildings will be signposted, and barriers removed.

The number of older people driving in Kilkenny is quite high, with 65% of over-70s getting behind the wheel in the week prior to being surveyed.

However, 37% of older persons rated their access to public transport here as 'poor' or 'very poor'. Some 36% of people reported that there was no public transport available within a 15-minute walk of their home, while just under 10% said that it was available, just difficult to access.

Action/outcomes: Preparation of a mobility plan and work on achieving a comprehensive city transport system. All older people will have improved transport access and better connectivity in hard to reach rural areas, and more age-friendly and widely-available information about same.

Kilkenny appears to compare quite favourably to other counties in this category.

Just 7% of older people reported problems with the upkeep of their home, compared with an average of 315 in other counties. The vast majority (94%) reported their homes were in good condition.

Actions/outcome: KLP to continue taking referrals on Housing Aid scheme, and — subject to approval, seek to establilsh a 'Care and Repair' service. The council will provide an appropriate number of age/disability-friendly housing units in new developments, and the Age Friendly Alliance will work to improve access to services such as day care and Meals on Wheels.

Only 4% of those surveyed in Kilkenny reported experiencing negative attitudes or behaviour toward them as an older person. That shows a reduction on the figure of 13% reported in 2011.

Actions/outcome: Stakeholders will work to ensure voice of older people is represented on community and municipal groups, to identify gaps in provision of physical activity for people with additional needs, and to establish preferences of older learners. The HSE and Gardai will work to ensure the safety and wellbeing of older, vulnerable adults.

The Age Friendly Strategy found that social participation in Kilkenny is lower than the national average. Only one third of people reported participating in community groups at least once a month.

Actions/outcome: Stakeholders will work to promote and empower older people to remain socially engaged with their community. Groups will continue to recruit outreach volunteers, while KRSP will continue to build on its older adult physical activity programme.

The number of and variety of social activities available for older adults willincrease and the percentage of older people participating in informal, voluntary work will increase.

Low numbers of Kilkenny people reported difficulty getting information about health and social care (3% here as opposed to an average of 12% in other places).

Actions/outcome: Libraries will act as an information huv for all matters age-friendly, while Kilkenny AFI will ensure information is provided in plain language and in hard copy format. Gardai will progress a number of initiatives including an age-friendly support office, and 'town hall' style meetings.

Information will be more widely distributed and available in the right format.

Kilkenny shows the lowest monthly volunteering levels of all the areas surveyed, with just 19%, compared to 28% in other areas. Those in the 55-69 category volunteered slightly more at 22%, but this is still lower than their cohorts elsewhere (32%).

Actions/outcome: Stakeholders will identify priority needs for older people and meet them where possible. KLP will support 0lder entrepreneurs and older volunteers.

Actions/outcome: The HSE is to implement a revised Model of Homecare, and the older persons service will review unmet need in local communities in areas like day care and Meals on Wheels. St Luke's Hospital will establish a frailty unit to fastrack older persons through A&E, while the Service Providers Forum will review possible community projects.