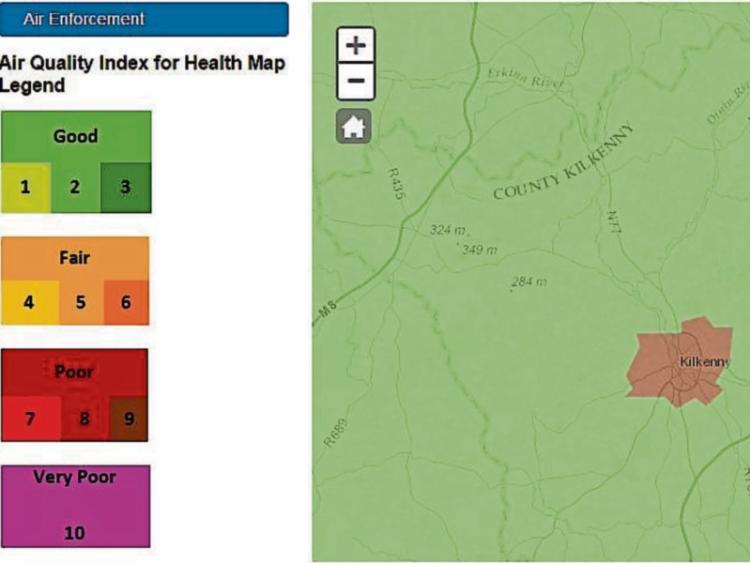 The quality of air in Kilkenny City has been categorised as ‘poor’ by the Environmental Protection Agency (EPA).

While the rest of the county has been rated ‘good’, the city’s monitoring unit at Seville Lodge on the Callan Road has had some troubling findings in recent days. The station monitors levels of benzene, ozone, and nitrogen oxides in the air.

The EPA has warned that poor air quality is responsible for around 1,200 deaths per year. Local Green Party councillor Malcolm Noonan today expressed concern at the data.

“This coincides with the cold weather we’ve been having this week,” he said.

“The EPA advises that people with lung or heart problems should reduce strenuous physical activity, particularly outdoors, and especially if they are experiencing deteriorating symptoms. The EPA should immediately notify the public of this pollution episode and ask people not to burn smoky fuels.”

Cllr Noonan said that the Government, Transport Infrastructure Ireland and local authorities need to collaborate to implement ambitious 'Smarter Travel' plans to increase the share of cycling and walking, but also to put significant investment in clean electric or biogas public transport in towns.

“This worrying trend in decreasing air quality is putting pressure on our health services and causing long term damage to the health of people in our urban areas,” said Cllr Noonan.

“Yet investment in cycling infrastructure is appallingly low and there is no plan for integrated rural and urban public transport outside the major urban centres. The Greens are calling for a coordinated approach from Government to reduce emissions by investing in alternatives to private car travel and create healthier urban areas for all.”