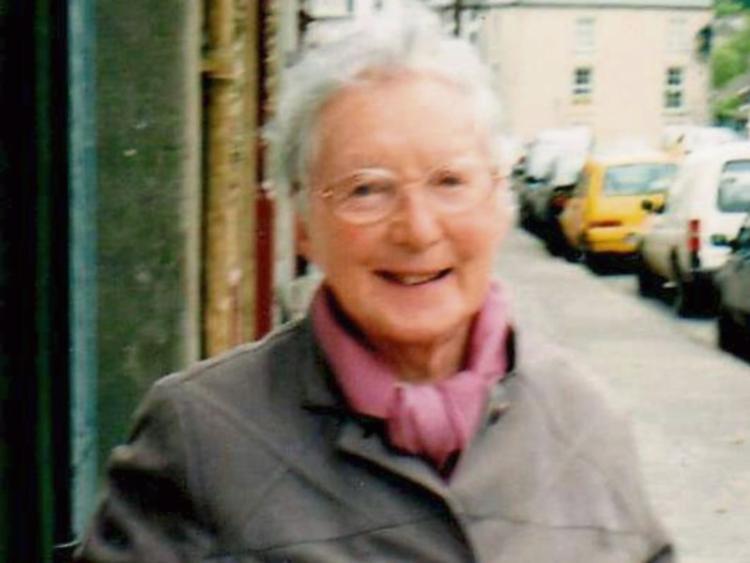 A Kilkenny based nun who made a lasting impression on almost everyone she met has gone to her eternal reward.

Sister Noirin de Buitleir died peacefully at Strathmore Lodge Nursing home, Callan, on Christmas Eve. She was 95 years old and her death marked the end of a long and eventful life during which she brought the gift of education to boys and girls in three Kilkenny towns.

After officially becoming a Sister of Mercy 77 years ago Noirin trained as a primary school teacher. For the next four decades she taught pupils at convents in Callan, Thomastown, and Ballyragget, and for a brief stint in British Columbia.

Originally from Cahir in County Tipperary, Noirin entered the Convent in Callan at the age of 18, following years of reflection on the true meaning of life and a strong belief that God was calling her to serve humanity as a nun.

While other teenage girls in her class were day-dreaming about boyfriends, movies they’d seen, or thinking about which secular occupation they would pursue upon leaving school, Noirin was avidly reading the Lives of the Saints, attending daily masses, and delving into the Gospels for inspiration and guidance.

Her parents consented to her desire to sacrifice the prospect of a lucrative academic position (her intelligence was above average) by following in the footsteps of the saintly and selfless nuns she had read bout.

There were tearful farewells from family and friends when she left Cahir in September 1939 to begin her life of service. In June 1940 she professed as a novice and took her final vows in 1942. Her two year of training as a novice at the Callan convent made boot camp in the French Foreign Legion look easy by comparison.

Aside from the rigorous regime of praying, fasting, exercising, and studying, there was no heating in the convent. To rectify this, the novices all rose at 3 am, danced for an hour to keep warm, and then returned to bed. On winter mornings they had to break ice in the wash basins or take freezing cold showers. It was Austerity with a capital A.

On rare visits to her family home she was escorted by other nuns and carefully supervised to ensure she didn’t look at her reflection in shop windows (the sin of vanity) or become distracted in any way from her vocation.

From the day she stepped into a classroom to teach, Noirin was committed to moulding young, impressionable minds into bright and attentive repositories of knowledge. Not a second was to be lost, she believed, in achieving that primary objective.

While some lay teachers might be willing to merely punch in the time and hope the pupils would learn a bit here and there, Noirin was adamant that children were in school to learn, so they wouldn’t be denied a career or a decent chance of advancement in the ever changing world that awaited them.

Every pupil was equal in her eyes, and if she noticed anyone getting left behind, she accorded that pupil special attention.

She taught me in 1st Class in the Callan Convent School in the mid 1960s. Back then, she was known as Sister Camillus. Remarkably, though I have forgotten so much of what occurred in my life before and after that experience I can recall this nun with uncommon clarity.

She taught us how to hold, and write with, a fountain pen, weaning us off the chalk and slates we had used in “Sixes” and the class preceding that. She introduced us to addition and subtraction sums, the Irish language, the joys of reading, and, her own favourite subject, music.

It wasn’t all sunshine and giggles of course. For the first three quarters of the twentieth century, corporal punishment was legal and widely used in Irish schools, by both lay teachers and ones attached to religious orders. 1st Class in Callan Convent School was no exception and Sister Camillus wielded a sturdy wooden implement known as the Bata.

Referring to it as a “stick” was among the offences for which you might be chastised. Others were: misbehaving in class, not doing homework, or failing badly at lessons. I remember her policy of asking how many sums we had got wrong. Each of us stood up and confessed. Then she would give us the option: Do you want ten small slaps with the Bata or two very hard ones?

It wasn’t the nicest of choices for a seven year old to make, but such was education back then. Boys who broke the rules were made sit beside girls, and vice versa. I remember one boy who pulled a girl’s ponytail after he got tired of sitting beside her.

As punishment, Sister Camillus taught him how to knit. She tackled bullying in peculiar ways. After giving the culprits a hearty dressing down she had them locked in a small room with a stuffed pheasant.

We all felt the sting of the Bata. There was no escape because there were so many reasons for getting slapped. But she only punished when she believed we would benefit from the experience, difficult though it is now, in 2017, to fathom how teachers could think that way. They were different times. It was a whole different world

There was a humorous side to it too. There was the day someone hid the Bata. A grim stand-off followed. We all knew who hid it and where. She left the classroom after introducing us to another nun who stayed with us in her absence. A few minutes later she returned, relieved the second nun, and dangled a large bag of bulls’ eyes in front of us.

Striding back and forth at the top of the classroom she held up the mouth watering sweets she had bought in Madge Kelly’s confectionery shop in Bridge Street.

“These are for the boy...or girl...who tells me where the Bata has been hidden!” she exclaimed. After a brief silence a hand went up tentatively. The boy looked about him nervously and said: “Sister, the stick is under the desk...over there”, pointing to the location. She handed him the sweets and then ordered him to put out both hands. He got six slaps on each for calling the Bata a stick!

Another day she said she had a grave warning for the class. If we got as many sums wrong the next day as we had that day she’d be asking the Russians to drop an Atom Bomb on Callan. The news at the time was full of speculation about nuclear war and the possible end of the world.

One boy at the back of the class was sniggering, a huge grin on his face. “What are you so smug about?” she asked, “I’ve just told you a huge bomb will fall on Callan if you don’t get your sums right!”

The little boy answered “I know, sister, but I’m from Mullinahone!” She laughed at that one herself, along with the whole class.

She was an ardent nationalist. In 1966, the 50th anniversary of the 1916 Rising; she taught us the Merry Ploughboy and in the playground girls skipped to the rhythmic chant of “I’ve always hated slavery, since the day that I was born, so I’m off to join the IRA, and I’m off tomorrow morn...”

Though a strict disciplinarian, she was kind too, and many past pupils remember the drama sessions in the Friary Hall in Kilkenny, the choir practice and singing lessons. And especially the cans of sticky sweets she passed around to them aboard Jackie Nolan’s bus on the return journey to Callan.

Though she alternated between Callan, Ballyragget, and Thomastown, most of her time was spent in Callan, and she was teaching there on a certain day in 1982 when a circular arrived from the Department of Education informing all teachers that corporal punishment was to cease in schools.

Far from resenting this development, Sister Camillus welcomed it. She told me herself in the 1990s that it was a liberating feeling...knowing that physical punishment would no longer be part of the school experience for children. There was a little ceremony in the convent later that week. The Batas were gathered and tossed onto a blazing turf fire...to sizzle and burn. Times were changing.

Years later, she regretted that the Bata hadn’t been decommissioned earlier, as it had, she believed then, done more harm than good.

When she retired from teaching, Sister Camillus reverted to using her own name, Noirin. That was in 1986, and for the next thirty years, she devoted herself to visiting senior citizens and people in hospitals, including people who rarely heard from relatives or had none to call to them. She offered spiritual solace to the dying and comforted people suffering from depression. She gave parenting and aerobic exercise courses, and used her musical talents to enhance the choir in Newtown church.

I talked to Sister Noirin on many occasions following her retirement... during bus trips to Kilkenny, at the grotto near the school where she taught, and along the Callan by-pass that she walked daily for years. She said she was haunted by some of the teaching practises of the past but hoped past pupils would forgive her and other nuns.

Though I felt the painful, numbing twang of the Bata myself I can certainly do that, especially when I consider her life of service and sacrifice, motivated by a spiritual calling.

Given her fondness for music, it was apt that Sister Noirin de Buitleir joined in the singing of Yuletide Carols at Strathmore Lodge nursing home just hours before she left this world.

And the date of her death-December 24th- was poignant, because she loved Christmas.

May she rest in peace.