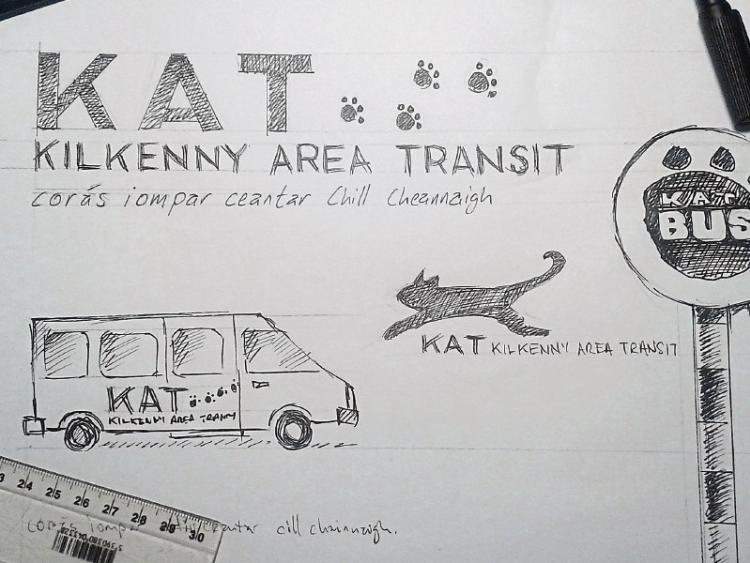 Local councillor Malcolm Noonan has suggested that award-winning animation studio Cartoon Saloon could be involved in the branding of Kilkenny's bus service, and has put forward 'The KAT' (Kilkenny Area Transit) as a possible name.

The Green Party councillor, who has campaigned for a local public transport service for many years, says that the 'KAT' ticks all the boxes in terms of local distinctiveness, easily marketable and a name that could  become as intrinsic to Kilkenny as the DART or LUAS is to Dublin. Cllr Noonan says he came up with the idea a number of years ago.

“I was at that time working on an EU project where I saw a lovely little electric bus in Bayonne, France called ‘La Navette’,” he says.

“It was a free bus and it criss-crossed the city quietly and frequently. It is hugely popular in Bayonne. I thought that in order for a service to be successful and for people to take pride in it, the bus needs to be funky and have a distinct local identity.”

“Since then I have been working on ideas around branding. One idea might be to ‘adopt’ Pangur Bán; the cat made famous in Cartoon Saloon’s ‘Secret of Kells’. Again this would broaden the Kilkenny connection, so I have pitched that idea to the salooners.

“The other idea is to develop an original graphic that would work across all platforms; vehicles, print material, tickets, bus stops etc’ I think it will have great tourism potential and will get the buy in from locals too,” says Cllr Noonan.

“We have a great opportunity to really move our city away from car dependency, towards cycling; walking and public transport, where the air is cleaner and routes to school are safer. This is the missing piece of the jigsaw and hopefully will counterbalance the increase in city centre traffic that CAS will bring.

“We have to move away from a perception that a city bus is for a certain demographic; it’s for everyone and a reliable, frequent, reasonably priced service will provide options for workers, tourists, students and give vibrancy to the town centre shops. I’m passing on my proposals and designs to the NTA (National Transport Authority) in the hope that they will be taken on board in the tendering process and that the presence of the KAT on our streets will become a reality before year end. It’s an exciting prospect for Kilkenny.”