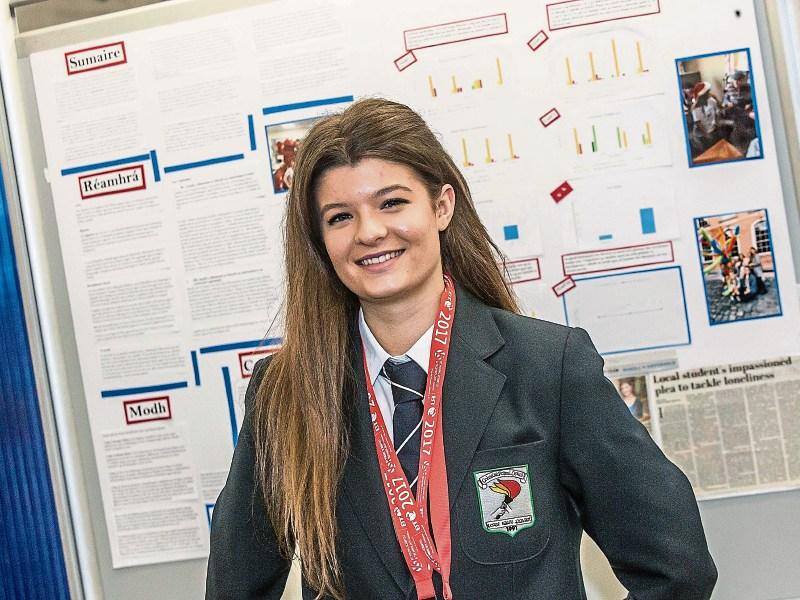 Fifth Year student at Colaiste Pobail Osraí Maeve Shaw received was 'highly commended' at the Young Scientist and Technology Exhibition for her project on the effects of voluntary care visits on the mental health of geriatric patients.

The title is: 'Anailís staitisticiúil ar chúraim ar '. It was inspired by research from the 'End Loneliness Campaign in England'.

Loneliness has been described as social pain—a psychological mechanism meant to alert an individual of isolation and motivate them to seek social connections.

Chronic loneliness can be a serious, life-threatening health condition. It has been found to be associated with an increased risk of stroke and cardiovascular disease.

“Research suggests that approximately 10% of older people are affected by chronic or persistent loneliness,” says Maeve.

“It also finds that loneliness amongst older people may be linked to depression, increased nursing home admission, decreased quality of life and cognitive decline. Loneliness is a result of high cortisol levels.

A cortisol excess can lead to a progressive loss of protein, muscle weakness and atrophy, and loss of bone mass through increased calcium excretion and less calcium absorption. As well as this, one study concludes lonely people have a 64% increased chance of developing clinical dementia.

“The Kare Bear project is a voluntary care visit initiative, which runs in St Luke’s Hospital Kilkenny, aiming to bring relief to those suffering from loneliness in hospital, therefore having an effect on recovery time,” says Maeve.

One in six young people suffer from mental health issues in Ireland, and because of the evident positive effects of the visits on the volunteers themselves, I chose to measure the effects of a voluntary visit on the visitors, using a control and test group. All of whom filled in mood diaries over the course of three days, four times a day.

“I would like to extend my thanks to all at Troy gate Day Care Centre Kilkenny, as well as the staff and patients of St Luke’s Hospital Kilkenny. I look forward to gaining ethical approval for a larger case study, which will measure the effects of the Kare Bears on the patients themselves in the future.

“From my project this year, I have proven that there is a clear and significant rise in a younger person’s mood after making a visit to the hospital with the Kare Bear Project. I hope to continue with my research and to grow the initiative further in the future.”

Maeve and her classmate Éabha Sloyan won the National Council Special Education Award for their project on Autism at last year’s Young Scientist exhibition.They were also selected to participate in the BT Young Entrepreneurs Bootcamp which by all accounts was a tremendously worthwhile experience.