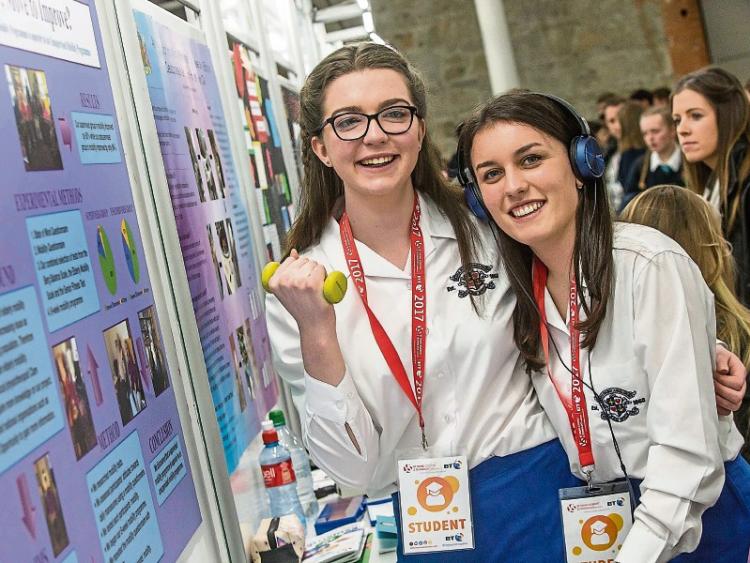 Sinead and Amy all smiles at the BT Young Scientist

As well as being highly commended by the judges, Loreto Secondary School students, Sinead Flynn and Amy O’Connell captured the hearts of everyone around them with their project, entitled, “Elderly Mobility; Move to Improve?” at the BT young Scientists.

It involved developing an eight-week exercise programme which they carried out twice a week with residents of Drakelands Nursing Home and participants of the Troys Court Day Centre.

And on Thursday, just after they had gone to the RDS to man their stand after lunch, two of their “dancers” from Drakelands appeared in front on them.

In their late 70s, Martha Doherty and Mary Morrissey had taken the train up from Dublin and a taxi to the RDS to reunite with their personal trainers.

It showed how much the visits to Drakenalds mean to the residents and it emphasised the importance of their work they carried out.

The inspiration for the project was the importance of maintaining mobility in the country’s increasingly aging population.

Their work involved developing their own 8-week exercise which they carried out twice a week with residents of Drakelands Nursing Home and participants of the Court Day Centre. Voluntary members of the community also completed the exercise in an unsupervised setting. The mobility of all participants was tested prior to the exercise ’s onset.

The girls have embraced their time and social interaction with those of the aging population and feel that it has benefited them and the individuals that participated. They will continue to develop these relationships and feel strongly about creating a programme for transition year students to provide activity, social interaction, and support to the aging population of our local community.