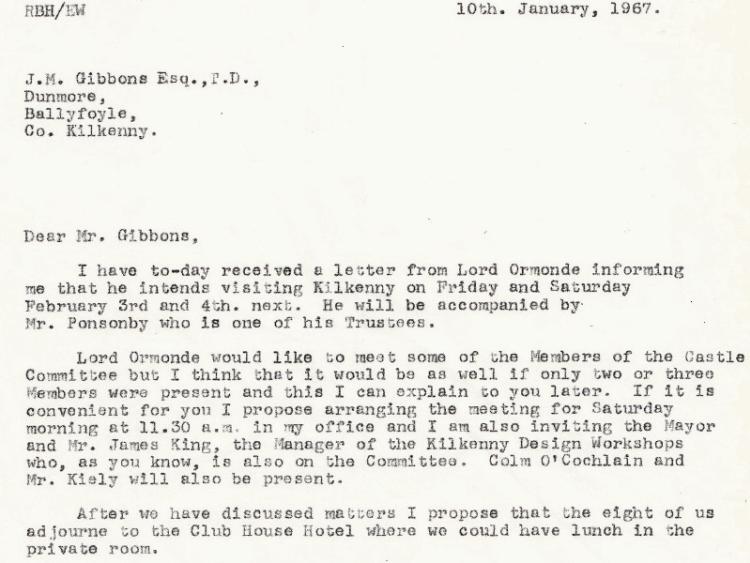 This year marks the 50th anniversary of the handing over of Kilkenny Castle to the Irish State.

Over 1.3 million people a year go through the Castle Park and over 300,000 people last year visited the castle which is looked after by the OPW.

The castle and the 52 acres inside its walls is the foundation stone of Kilkenny tourism.

It is the focal point of the city and provides us with the iconic image of  the city.

The castle which dates  from 1210 is one of the most important historical sites on the island while  the Castle Park  is  a wildlife wonderland which also has a magnetic draw.

More importantly it is a source of great pride to the local people.

And it is wonderful that a half century later, a new tourist attraction  is  to open in the centre of the city -   The Medieval Mile Museum at St Mary's Church,  off High Street which is stunning and is profiled on Page 2 by Sam Matthews.

As far as we know. there are no plans to commemorate the historic events of 1967 and the preceding year when all the groundwork was done.

And there is no plaque or public, permanent record of this groundbreaking and important milestone  in the life of the city and the county.

There is just one surviving member of the committee set up to bring it into public ownership and look after its restoration still alive.

Peter Smithwick, the retired president of the Irish District Court played an important role on the committee and  in the handover as well as the successful attempts  to begin the restoration of  the castle.

Others on the committee were the late Jim Gibbons,  who was later  the Minister  for Agriculture who  was pivotal in the sale to of the castle by the then Marquis of Ormonde, Arthur Butler.

The last and sixth Marquis, Arthur,  sold it to  the state for £50, fifty years ago.

Another man, who was at first,  omitted from the committee but later seen as  being critical to the success of the entire venture, actually helped to remove flags and roped placed for the   foundation of houses  to be built in 1966 on what is still the Castle Park.

That man was the late Hubert Butler, grandfather of Bennettsbridge farmer. Suzanna Crampton.

Another major figure at that time  was the secretary of the committee, the late Mick McGuinness, father of Deputy John McGuinness.

Frank Kavanagh worked for all his adult  life in the castle and was there when the castle officially opened in 1967.

“That year 11,000 people passed through the castle,” Mr Kavanagh said.

He picked out two politicians who made a huge difference in the restoration of the castle.

The first is the President of Ireland,  Michael D Higgins who as minister for the Arts and Heritage said the money had to be found for the project after walking over the floorboards, a storey up with Frank.

The other, according to Frank was  Phil Hogan,  who as minister for the OPW  secured the funding to stop the haemorrhage of items from the castle by the Butlers  and  who made grants available for a number of important restoration projects.