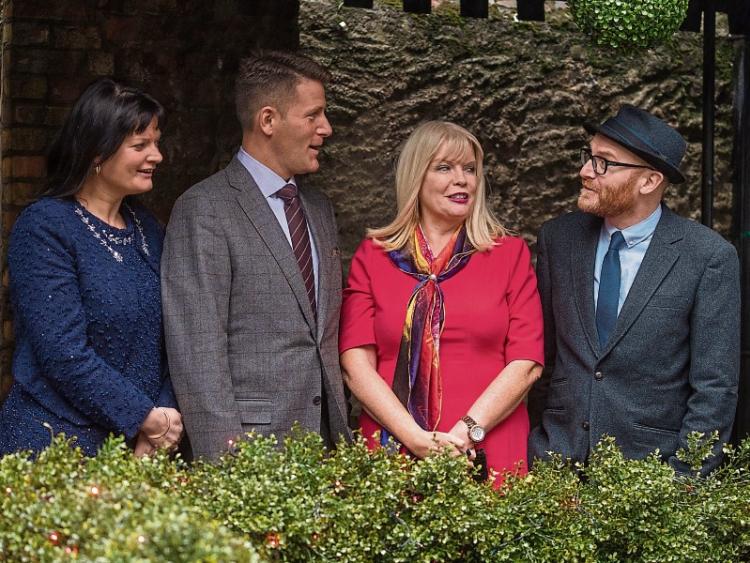 Pride, positivitiy and optimism was palpable in the Set Theatre on Monday morning as the plans for Lighthouse Studios were unveiled.

Cartoon Saloon is undoubtedly one of Kilkenny's greatest success stories and years of toil and talent came to fruition with the announcement of the new animation studio and 140 new jobs.

Sitting at the top table Mayor Pat O'Neill was flanked by CEO of Mercury Filmworks, Clint Eland and CEO of Cartoon Saloon, Paul Young as well as the Head of Regional Development at IDA Ireland, Anne Marie Tierney Le Roux and Minister for Jobs, Enterprise and Innovation, Mary Mitchell O'Connor.

Founding members of Cartoon Saloon Tomm Moore and Nora Twomey were also present along with artists and executives from both animation studios.

Mayor O'Neill said that the creation of Lighthouse Studios will further enhance the Marble City's reputation as the artistic capital of Ireland.

“Cartoon Saloon have been fantastic ambassadors for Kilkenny in recent years and have brought great honour and success to our city and county.

“It's great to see their plans for expansion within the animation industry and no doubt they will turn Kilkenny into a centre of excellence for animation across the world. It goes to show how well thought of a local company is globally with the creation of this partnership with a well known animation company of the scale of Mercury filmworks.

“This is an extremely exciting project that has a fantastic opportunity to grow here in Kilkenny and fits in excellently with the ideals of Kilkenny. From listening to both CEOs' it is great to hear their vision for this company and the sense of pride they take in locating in Kilkenny and the plans of turning Kilkenny and Ireland into an animation powerhouse.

“I would like to thank the IDA for all their hard work in bringing this to fruition and bring this company to Kilkenny is a fantastic achievement considering all the competition that is out their globally. This brings us close to 1000 FDI jobs in Kilkenny,” he said.

Lighthouse Studios is currently operating out of a premises on Patrick Street until they secure a more permanent home. The joint venture, a partnership between Cartoon Saloon and Mercury Filmworks, is supported by the Department of Jobs, Enterprise and Innovation through IDA Ireland.

Lighthouse Studios will provide high-quality children’s and family-animated content for a number of the biggest industry players, including Amazon, Disney and Netflix.

Welcoming the announcement Cllr Malcolm Noonan said that Cartoon Saloon had put Kilkenny on a global stage for animation and that this collaboration would further copper fasten their presence in the city.

“The Salooners have brought creativity and cultural vibrancy into the heart of Kilkenny. Locating Lighthouse Studios in the Patrick Street Business Centre is testament to John Ryan's vision for a vibrant city centre with state-of-the-art digital facilities. This can have such a positive knock on effect to surrounding business in the city centre' he said.

“On a personal level I'm delighted for Tomm, Paul, Nora and all the crew. They have put their hearts and souls into this, often struggling against a tide but their collective talent and tenacity has delivered just reward' he said.

Cllr Noonan said that we now need to build on this investment and think seriously about reconfiguring the terms of the Brewery site development to allow start ups and incubator units and to try to develop a centre for commercial creative arts in Kilkenny, incorporating animation, design, drama and music.

“We have the creative talent to make this happen; Cartoon Saloon started with a small group of creative people and a vision. We must push on now and add to the creative community that they have nurtured. I wish Lighthouse Studios every success in this new adventure,” concluded Cllr Noonan.

CEO of Kilkenny Chamber, John Hurley said that the opening of Lighthouse Studios is ‘a fantastic good news story for Kilkenny and a great way to start off 2017’.

“Kilkenny Chamber and Cartoon Saloon have been neighbours for years in the iconic Maltings building off James Street and we are delighted to welcome Mercury Filmworks to Kilkenny this week. This coming together of two internationally renowned animation film houses to form Lighthouse Studios is phenomenally exciting and puts Kilkenny firmly on the global stage as a centre of excellence for this unique and highly skilled work. Kilkenny Chamber is looking forward to working with these wonderfully talented people over the coming months and years. ”