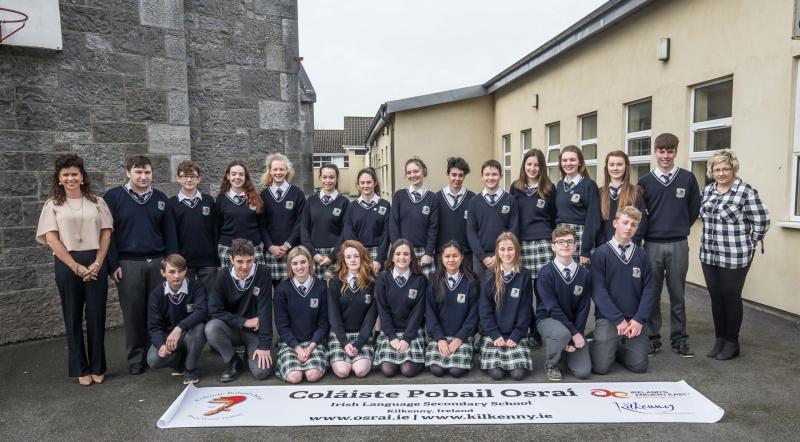 Students from Coláiste Pobail Osraí who are going to New York

TWENTY eight Transition Year students from Colaiste Pobail Osrai are about to embark on the trip of a lifetime to New York, a 5 day holiday which will see them march in the St Patrick’s Day Parade.

The close-knit group have fundraised tirelessly for months to help finance the New York tour. They ran a sold-out fashion show at Langton House Hotel, hosted an after-school disco at Gaelscoil Osrai, packed groceries in SuperValu Loughboy and organised an Irish film in The Ormonde Hotel which was supported by schools across the city.

Transition Year Co-ordinator, Mary Ross Sloyan, is one of three teachers who will accompany the group to New York on March 16, the eve of St Patrick’s Day. Also heading State-side with the group are Muinteoir Narrell and Muinteoir Keith, popular class teachers at the all-Irish school.

“I really wanted something different this year- a trip to stand out as Irish and celebratory at the same time,” Mary said. “Our school celebrates its 25th Anniversary this year. 25 years is a milestone for the Colaiste. It’s been fabulous to have been a part of its exponential growth since I joined the staff ten years ago.

“New York encompasses Ireland particularly on a day when so much of New York and the rest of the world turns green and our little nation is celebrated world-wide.  I couldn't have done it without the help of the class teachers Narrell Ní Bhroin and Keith O Muirí; the pupils and parents of the Colaiste. A big thanks and shout out to them all,” she said.

Among the lucky group travelling is student and class spokesperson, Brian McCormack. He said the whole class is looking forward to a fantastic few days. The school is also thrilled to announce 'Kilkenny Tourism' as their official sponsor for the trip, he added. While State Side, the Coláiste wants to share what Kilkenny has to offer.

“With the help of Kilkenny Tourism, will be able to promote county Kilkenny. We’ve a very busy schedule for the few days. We’re planning to appreciate the city through the Empire State Building Experience on our first day, before we march in the parade. That will be an amazing experience – something we will remember for the rest of our lives.

“We’re also visiting the Top of the Rock, the Museum of Modern Art, Central Park, the American Museum of Natural History, Planet Hollywood and will be travelling to the Statue of Liberty by ferry. We also plan to pay our respects at the 9/11Memorial and Museum and see the spectacular School of Rock on Broadway.”

The school has thanked everyone who supported the various fundraisers and looks forward to celebrating the remainder of its 25 Anniversary with a host of events over the coming weeks and months.