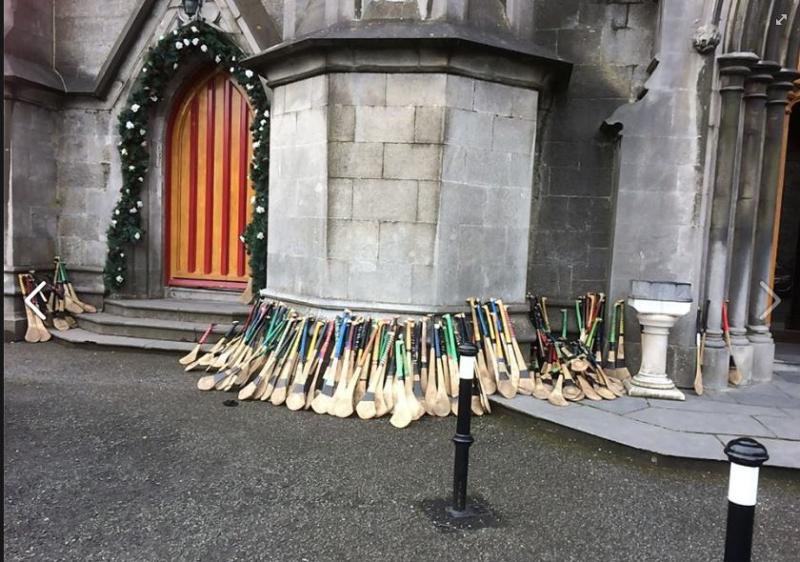 A line up of genuine ash - hurleys outside St Mary's Cathedral as students from St Kieran's College attend mass for St Kierans Day.

Local Kilkenny Councillor, Malcolm Noonan of the Green Party  fears for the future of hurling as he slams the government for failing to protect our native Ash tree adding  'We will lose the very soul of the game if we replace the ash hurley with a plastic stick.'

Mr Noonan was  responding  to the launch of a composite hurler by high profile inter county hurlers - including Kilkenny's Richie Hogan.

He is calling on the government to urgently launch a National Strategy to tackle Ash Dieback disease - which is threatening the supply of ash for hurley makers.

The Greens fear that the response of both the GAA and Government is to develop an alternative to ash rather than invest in research that might challenge the disease and prevent it’s spread.

Speaking following the launch of the Reynolds composite hurley this week,  Cllr  Noonan said that successive Governments had failed to halt the importation of diseased plants and organic material that have led to the spread of Ash dieback and other plant diseases and that in particular the ash should be considered a species of National cultural importance given its association with the game of hurling. ‘It is simply unacceptable on an Island Nation that we have failed to secure our borders from biohazards and the importation of plant diseases and invasive species’ said Cllr Noonan.

‘I am aware that research is taking place into using ash seeds of local provenance and to using more parts of the ash tree to make hurleys. Our fear is that if we develop a replacement that is not environmentally friendly, the impetus to try to stem the disease in Ireland will be pushed down the agenda and we will lose one of our most beautiful native trees. We want Government to develop a National Strategy to tackle ash dieback and other threats to our native flora and fauna and we want it to be resourced through an agency such as the Heritage Council’  said Cllr Noonan.

He also questioned the impact on the craft of hurleymaking in Ireland; a craft that goes back centuries but could be lost in a generation if the new composite hurley is favoured by players or endorsed by GAA. He said that the growing of ash was not just of benefit to hurleymaking but to mitigating climate change and in providing a sustainable fuel source for communities. ‘I am aware of some really innovative research that is taking place by Coillte and other agencies. Let’s not lose sight of the fact that this ancient sport is one that is intrinsically connected to nature,"  he concluded.