'We look forward to working with Waterford' 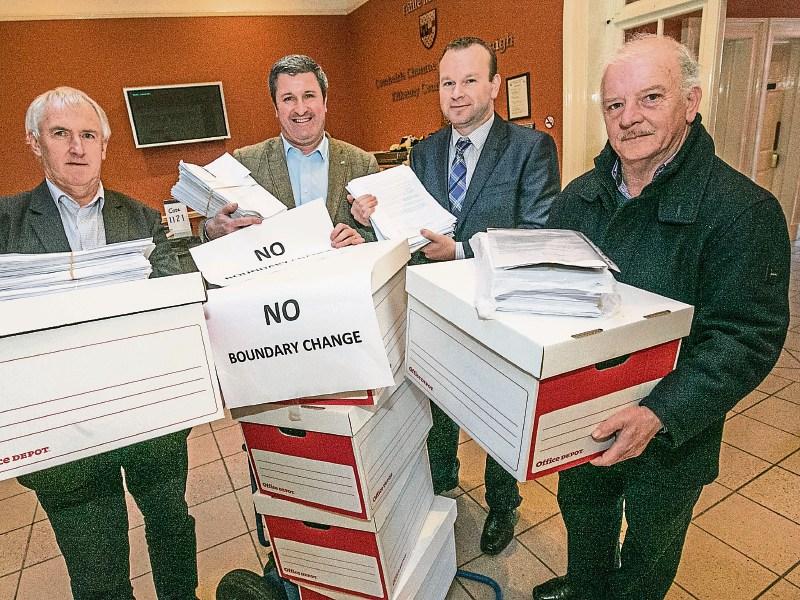 South Kilkenny councillors with some of the submissions during the boundary review process.

After months of strained relations, there is a keenness now in Kilkenny to draw a line under the controversial Waterford boundary review and focus on the business of moving the south-east forward as a region.

That desire was in evidence at Wednesday’s meeting of the Piltown Municipal District, where south Kilkenny councillors reacted to Minister Simon Coveney’s announcement with a cautious welcome.

The boundary review tested the relationship between the two counties – the largest population centres in the south-east. While Waterford supported a redrawing of county lines, Kilkenny fought it every step of the way.

On Wednesday, area chairman Ger Frisby said co-operation was vital to progressing everyone’s interests. All counties need to work together to secure the region’s future.

“There's a lot of details still to be sorted out, but we look forward to working with Waterford on things going forward – and we've started that process,“ he said.

“Hopefully, this can draw a line under that debate, and we can get back to the real issues, the important issues on the ground. And there are huge issues there in relation to infrastructure through the whole area. We need to drive on now –  with Tipperary and Wexford – to drive the region forward.”

The Slieverue councillor said that roads such as the N24 and N25 needed to be upgraded. Broadband also needs to be improved, while a university for the region, he said, would be key to everything else.

He pointed to the New Ross Greenway as a good example of cooperation between the three counties of Waterford, Wexford and Kilkenny.

“It's all positive stuff, and we are looking forward to getting on with it now,” he said.

“The area as a whole will benefit.”