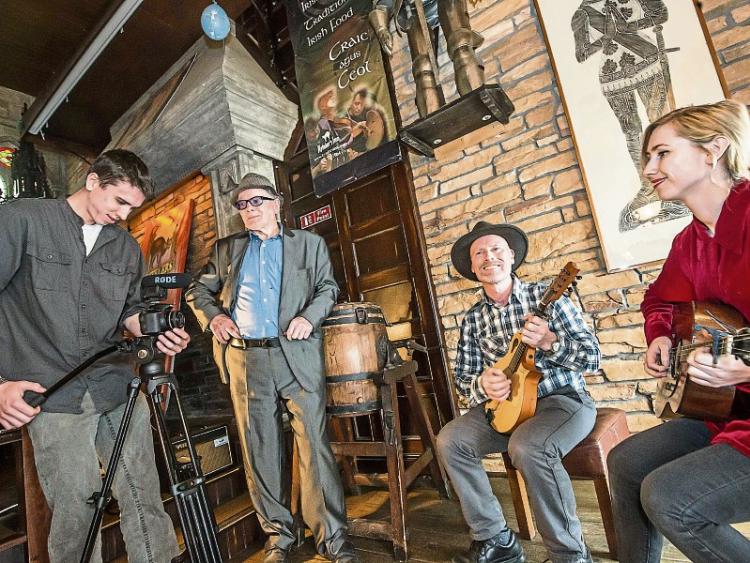 An author, poet, songwriter and so much more, Ned Egan is certainly not your average 81 year old and to prove that point, he is in the throes of film making.

Last Sunday in Kytelers Inn, Ned's film is coming in to the home stretch as he directs the action to the music of his many songs.

While the film will feature his tunes, it will also highlight his native county and city.

And it will feature a considerable amount of local singing talent

Ned had songs recorded by The Dublin City Ramblers, Annmarie O’Riordan, and Patsy Watchorn – who put his composition – “Luke’s Song” - on his top 20 of all time list.

When Ned got the idea of filming his songs, he decided to go with good local talent, keeping it very much a local project.

A quick look at www.kilkennyabu.com will give you an indication of the talent on show with the full list of participants. Some poetry is thrown in too, recited by such artistes as Brendan Corcoran and Wattie Dunphy.

And the filming will take to the skies, as a drone-cam will also get aerial pictures of Kilkenny villages, of course its wonderful city.

Ned has found his singers in some unusual places - “I've found my singers by unusual means,” he said adding “Some when busking on the streets, one girl was heard singing at a funeral, another found for him by my cousin, Etaoin Holohan, who runs a regular little hive of artists and singers in Callan.”

And down in Kytelers on Sunday morn, listening to two of his songs being filmed by camera operator Shane Hatton, a top lensman – at the young age of 26 - it's obvious that Ned has brought something magical together.

Ailise O’Neill, singing “My Robineen”, and accompanied by her Dad, Hughie, a very talented duo. Ailíse is one part of 'The Knotted Chords', an Irish folk acoustic duo, singing and playing several instruments with her sister Margaret.

Hughie is in the band 'Divil the Bit'. He plays the banjo and mandolin every Friday night in Lannigan’s in Kilkenny.

Next to sing was Muireann Ryan, with 'Rosie Blue' - both songs very different and Muireann's style is certainly showstopping. She is a veteran of many shows, having appeared as an actress at the venerable ‘Watergate’.

Ned thanks the various venues who have helped them with his filming, the latest being Diarmuid and the staff of Kytelers. Also the excellent Rory Broderick Recording Studio for their fine work.

Ned's extremely grateful to the Watergate theatre, who will host the launch of the film, which has a family friendly, feline working title, in the early summer.