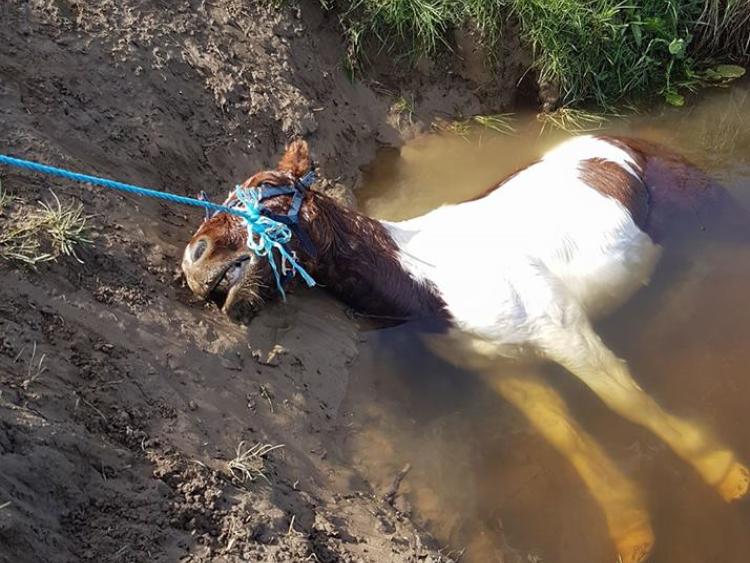 A dead horse that drowned in the River Nore and prompted calls for more actions to be taken locally to prevent horse cruelty.

Horses will be seized from a number of locations across Kilkenny City if the animals are not chipped and passported, a Garda Chief Superintendent has warned.
To date this year gardaí in Kilkenny have received reports of fifty incidents from members of the public regarding concerns over horse welfare and are currently investigating two cases of alleged horse cruelty.
Chief Superintendent Dominic Hayes told a meeting of the Joint Policing Committee meeting that he has spoken to a number of families in relation to horse welfare in the past week.
“I sought an undertaking from them that by May 1 they would know how many of their horses are chipped and passported,” he said.
The Chief Supt told the meeting, which was held in Callan, that he would be returning to the two sites over the coming weeks and horses will be seized if they are not compliant adding that reduction is key in addressing horse welfare.
He described the ongoing interaction with the Travelling community as; 'a work in progress' adding that the Kilkenny Traveller Community Movement have been very helpful in facilitating the chipping and passporting of horses.
Last year gardaí in Kilkenny investigated 78 complaints made in relation to horse welfare and in 2015 there were 133 recorded incidents relating to horse welfare in the city and county .
There has also been a number of successful prosecutions relating to horse welfare.
Chief Supt Hayes was responding to questions from Cllr Andrew McGuinness relating to the recent 'epidemic' of alleged horse cruelty cases at a Joint Policing Committee meeting.
Superintendent Padraig Dunne also told the meeting that a multi-agency approach between gardaí, Kilkenny County Council and the Department of Agriculture is what is needed adding that gardaí have a zero tolerance approach to all forms of animal cruelty.
Chief Supt Hayes said that he was 'very passionate' about horse welfare.
“The Society of Prevention of Cruelty to Animals seized a horse last week. Ownership is an issue,” he said.
He also referred to an incident whereby a garda had to wait for over two hours for back-up after attempting to seize a horse.
The Chief Superintendent also said that he has in the past sought meetings with two families in the city, who have a substantial number of horses.
“We came to a voluntary code and it hasn't worked,” he said.
Director of Services with Kilkenny Council, Tim Butler also pointed out that all lands where horses are kept must be equine-registered with the local authority. 29 horses were seized from a site close to the Wetlands Halting Site last year and remain in the care of the Department of Agriculture awaiting a court decision.