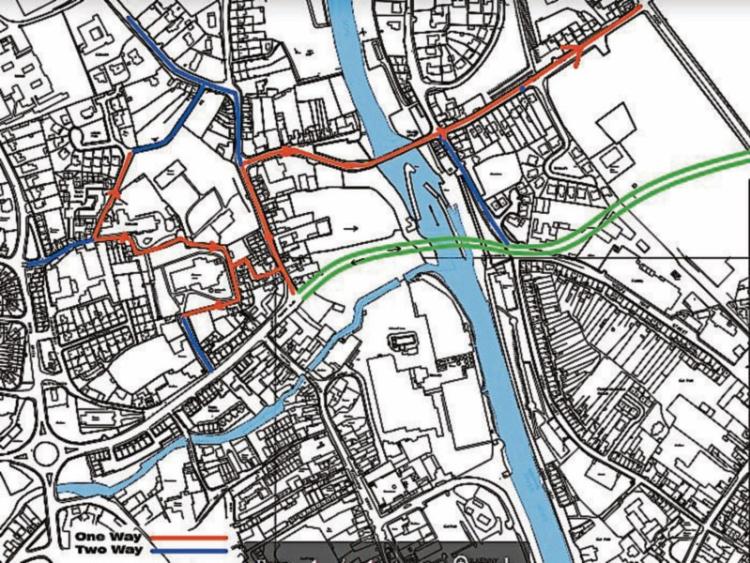 A ‘best guess’ traffic management plan will operate when the new bridge opens in Kilkenny City, with a full plan for how it is all to work still some time away.

It is now expected that the Central Access Scheme will open in the second or third week of May. A name for it has yet to be chosen from a shortlist of eight.

At Friday’s meeting of the Kilkenny City Municipal District, director of services Tim Butler told the members that most of the heavy works have been completed at this stage. He thanked everyone for their patience.

Pictured (right) is a map of how traffic might be managed in the future. It involves a number of envisioned changes to how the current road network operates. Some of it will be in place when the bridge opens, and other parts may come on stream in the longer term.

Green’s Bridge is to remain two-way for cars, while HGVs will still be able to use the bridge, but only one-way — from west to east. A number of councillors have expressed surprise at this.

“I can't fathom how Green’s Bridge will have any HGVs going over it with a new bridge a few metres away,” said Sinn Fein councillor David Kennedy.

“What is the point of lorries or trucks going there?”

This comment was echoed by Cllr Breda Gardner, while Cllr Joe Malone said he was also ‘confused’.

However, director of services Tim Butler said he was surprise at this reaction, given he has said it on previous occasions. He said HGVs travelling east to west had been the real pinchpoint, and that was now to be eliminated. City engineer Seamus Kavanagh said there was a possibility that Vicar Street (outbound) will become a one-way street in the future. He said it was going to take a bit of time, and this was the council's ‘best guess’ at how it was going to work.

In addition to Vicar Street, Church lane – the narrow road network surrounding St Canice’s Cathedral and the Good Shepherd – will become one way also. Coach Road (the hill up to the cathedral) will remain two-way.

After the bridge has been opened, the council says it will have more traffic information available, and an updated count. A plan will then be prepared and presented to members, along with public consultation.

Cllr Matt Doran said he had every confidence that this plan would work. He said there were companies that had only engaged in discussion with the council once the bridge was in place.