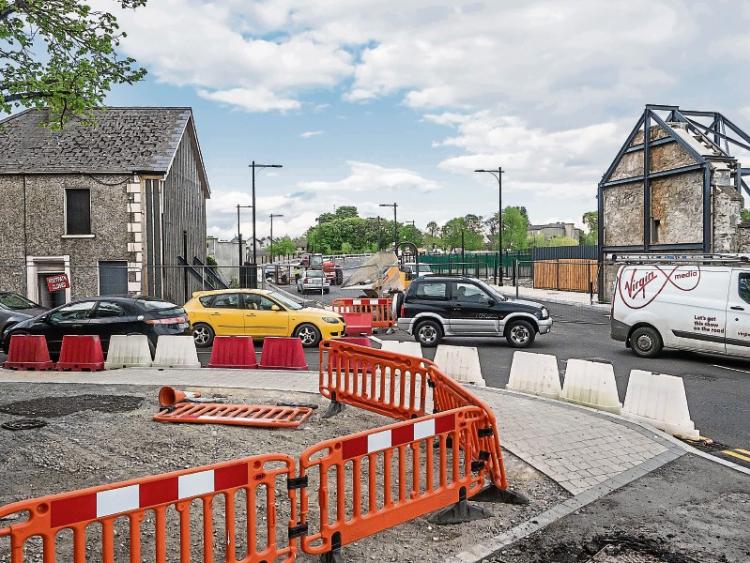 The corner of Vicar Street in Kilkenny this week. Photo: Pat Moore.

A number of local councillors have warned there will be ‘traffic chaos’ in Kilkenny City when the new bridge opens next month.

At a city meeting on Friday, several councillors expressed concerns over the lack of a definitive plan setting out how traffic is to be managed. One former Mayor of Kilkenny Joe Malone described the traffic plan as ‘a wait and see job’, while another, Cllr Malcolm Noonan, said he found the approach ‘staggering’.

The corner of Vicar Street and Irishtown, which will become a junction once the road opens, is continuing to cause considerable problems for motorists and pedestrians at the moment. Mayor Patrick O’ Neill said it had been ‘a nightmare’ since the works were carried out on the corner of Irishtown.

“Anyone not confident is going to stop and wait. We are going to have serious issues there at Vicar Street initially.”

City engineer Seamus Kavanagh said that the work done there probably should have been left until the full scheme was nearer opening.

Cllr Malcolm Noonan warned that the traffic data to date had not take into account traffic that would be generated by the scheme. He said there was a problem with ‘open the road and see what will happen’.

“I am very concerned, I have to say,” said the Green Party councillor.

“When this opens, there is going to be traffic chaos. I hope I’m wrong.”

At a meeting of Kilkenny County Council on Monday, Cllr Noonan called for a special meeting to be held ahead of the bridge’s opening to discuss the issues in detail.

“Thirty years in gestation, ten years in planning, seven years in design and construction, €20 million of local public money and no one seems to have a clue how the scheme will work,” he told the Kilkenny People.

“Any HGV restrictions introduced will require the resources of the Gardai to implement. All the while, the problem of HGVs trundling through residential areas and past the two biggest schools in the city and a main emergency route to the hospital, will persist until the ensuing chaos will compel us to plead with the Government to fund the completion of the outer ring road.”