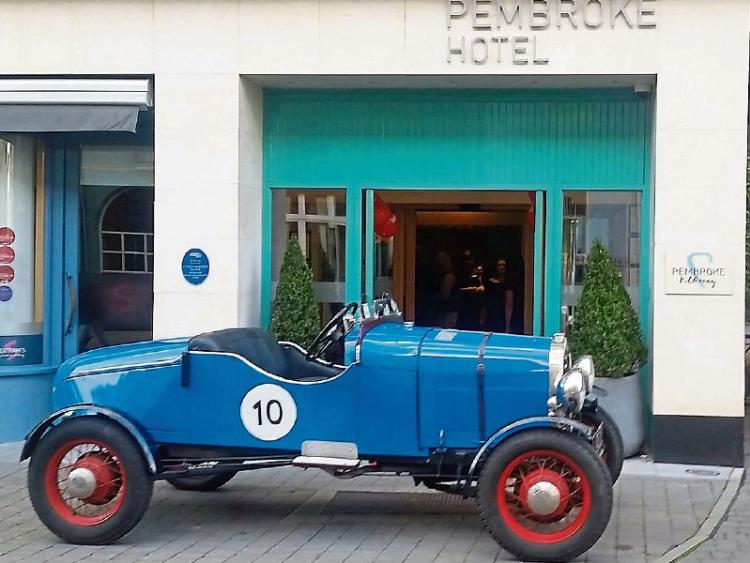 Fifty of Irelands most spectacular vintage cars from the 1930s will arrive to the Pembroke Kilkenny hotel at 4pm tomorrow, Saturday May 6.

Members of the Irish Veteran & Vintage Car Club (IVVCC) from across the country will assemble in the leading four star hotel for the weekend, before taking off on a 65-mile round trip across the scenic Kilkenny country side on Sunday morning.

The event is a poignant one for Pembroke Kilkenny as it is located on the site of ‘Stathams’, a leading car dealership in the South East throughout the 20th Century. As part of the hotel’s relaunch in 2016, the famous and historic ‘Statham’s Ford Special’, which was built onsite by George Statham in the 1930s, was brought home.

The 1930s saw the dawn of a new era in Irish motor racing with three Irish International Grand Prix being held in Dublin’s Phoenix Park between 1929-1931, this encouraged many motor enthusiasts to become involved. Designing and building their own ‘Special’ purpose-built cars became the option of choice. The Statham Ford Special was one the most famous having achieved many notable successes.

“We are very happy to host The IVVCC in Kilkenny this weekend,” says John Ryan, owner of Pembroke Kilkenny.

“Particularly given the strong historical links our Hotel has with Irish motor racing. The heritage story belonging to ‘Stathams’ is one we are extremely proud of being associated with, they were leaders and innovators in their work. Bringing this fleet of extraordinary vintage cars to Kilkenny and to explore some of Ireland’s Ancient East is part of our dedication in showcasing what Kilkenny and the South East has to offer.”

The ‘Statham’s Ford Special’ will take part in the trip alongside other notable cars from the era such as an Alpha AC 2300 Spider, BMW 328 Roadster, Blower Bentley along with a Riley Special.

“We are delighted to have so many cars of this pedigree assembled in Kilkenny,” says Shane Houlihan, President with The IVVCC.

“The Statham’s Ford Special is a very important racing car having achieved exceptional successes in the 1930s. It was known the length and breadth of the country and to have it restored so beautifully and back at its base in Pembroke Kilkenny is a credit to all of those involved.”

The IVVCC was set up in 1963 to promote and facilitate the preservation, ownership, appreciation and use of historic vehicles. The Statham’s Ford Special vintage car is permanently exhibited in the Pembroke Kilkenny foyer.

All are welcome to join the Pembroke Kilkenny team over the course of the weekend to view the many spectacular vintage cars which will be on view.