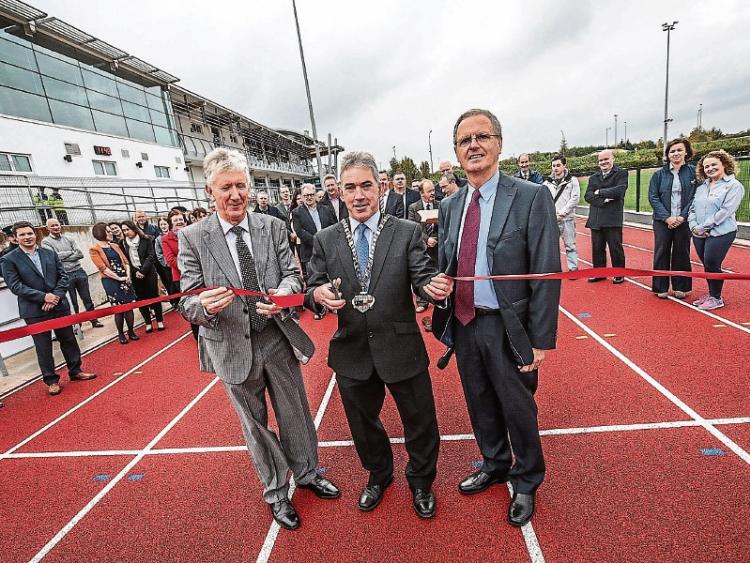 Cutting the ribbon on the Watershed's newly-redone track last year.

The Watershed sport and leisure facility in Kilkenny continues to show positive growth, with visitor numbers now almost double that of its opening year.

Close to 650,000 visitors came through the facility’s doors last year, and the business has been established and consolidated despite opening in the teeth of the recession nearly nine years ago.

The Watershed’s chief executive Dermot Gaynor gave a presentation at a recent meeting of Kilkenny County Council. He told the members that the Watershed did not require an annual subvention to operate, but occasionally needed support (such as for the restoration of the running track). The facility largely pays its own way, but is a loss-making company after depreciation.

“We’ve achieved steady growth, but not phenomenal,” he said.

The budget was €1.3 million in year one, and is €1.8 million this year. Payroll costs just over €1 million, with 47 staff between full time and part time. Mr Gaynor also noted that the Watershed has an excellent safety record.

As well as the number of visitors almost doubling over the years, ‘pay as you go’ customers account for 20.5% of the business.

Last year saw the opening of the new running track, and Mr Gaynor it has been very satisfactory, and will serve well for the next 15 to 20 years. The track and infield area bring in about €30,000. Mr Gaynor noted this was a good example of investment in infrastructure which was not hugely commercial, but nonetheless a big part of Kilkenny’s sporting culture.

He said one of the biggest factors in the Watershed's success was ‘clarity and a resolute defence of our business model’.

“Financial self-sufficiency is a must,” he said.

Having to ‘hold the line’ on this, he said, can be tough at times. However, Mr Gaynor said, it was not the job of the company to subsidise sport and leisure in Kilkenny.

“We have tried to be consistent with how we price things,” he said.

At the moment, the company is looking at switching to a UK-based software system which will be less labour intensive and more user-friendly for customers. It will facilitate online bookings.

The gym still has about 75% of its original equipment. Mr Gaynor said it is in good condition and well maintained, but is 'a bit like a car with a few miles on it'.

Councillor Peter 'Chap' Cleere said he was ‘blown away’ by the figure of 650,000 visitors in one year.

Cllr Malcolm Noonan said the decision to invest in the initial development was testament to the success of the local authority. He agreed it was not the place of the Watershed to subvent sport and leisure. He also said he used the facility with his family and found it excellent value for money.