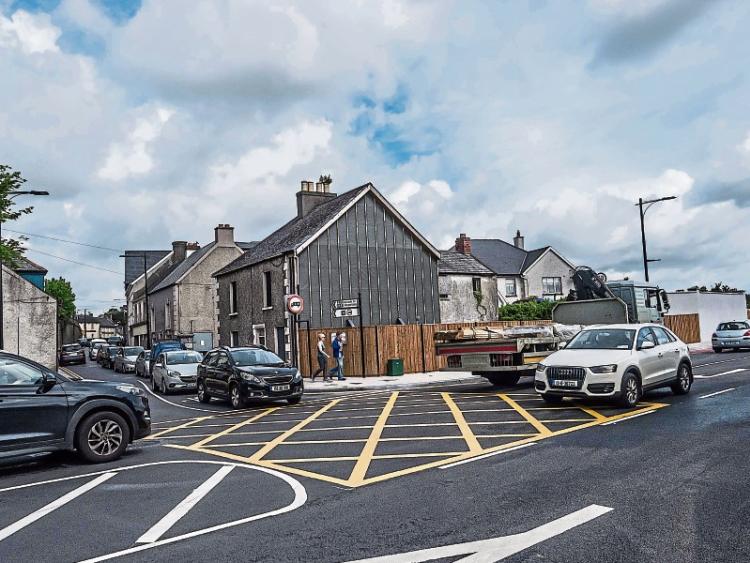 Traffic on Vicar Street/Dean Street at the new bridge on Thursday.

A traffic count is under way, and some tweaks have been made to traffic management systems in and around the Central Access Scheme in Kilkenny City following the opening of the St Francis Bridge this week.

Adjustments have been made to the lights in Irishtown to give some extra time for traffic heading from St Francis Bridge to Dean Street. The council’s director of services Tim Butler has said they will continue to monitor traffic movements for the next number of weeks.

The matter was raised at yesterday’s meeting of the Kilkenny City Municipal District. Cllr David Kennedy brought up the issue of traffic on Vicar Street, saying he had received two calls about it that morning alone.

“There's a problem there,” he said.

“It is a serious issue, and someone is going to get hurt.”

His Sinn Fein colleague Cllr Sean Tyrrell said he had travelled over the bridge the other day. He said he thought it looked quite nice, but there were clearly issues still to be sorted.

Cllr Malcolm Noonan said his views on the CAS and its impact on traffic were well known. He said that parts of the scheme, he felt, are ‘over-engineered’.

Meanwhile, other councillors have said the project is already showing its merit. Cllr Peter 'Chap' Cleere said he had driven the bridge four times since its opening, at both peak and off-peak times. He said it had been ‘a fantastic experience’, praising in particular the views opened up of St Francis Abbey and Kilkenny Castle.

The Fianna Fail councillor said he had received a call from one lady who reported that the journey time of her normal school run had been greatly reduced.

There has also been mixed reactions from other local road users, some of whom say it is now easier to get across the city, others pointing to congestion issues at key locations. Some motorists are still getting used to the new infrastructure, others appear to still opt to use Greens Bridge and Vicar Street to access Dean Street when coming from the Castlecomer Road side.

The Vicar Street issue may be in some way alleviated if, as has been suggested by council engineers, it becomes a one-way route once a comprehensive traffic management plan has been put together.

At Friday’s meeting, Mr Butler also noted that the heavy rain and people coming out to see the bridge may have exacerbated the congestion somewhat in the opening two days.

“It is being monitored,” he said.

“It does take time for things to settle down.”

He told members that the traffic count was under way, and the council would then be in a position to make further informed decisions on it.