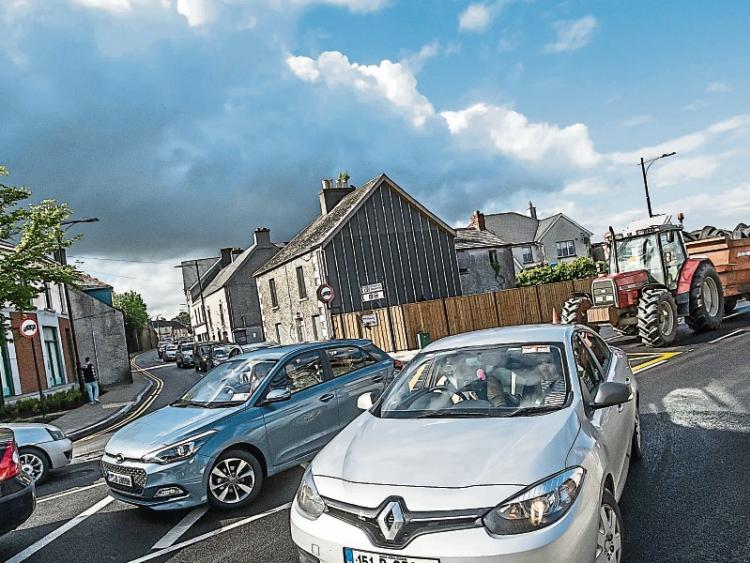 Traffic congestion on the junction of Dean Street/Vicar Street and the new bridge on Thursday. Photo: Pat Moore.

A local councillor is calling for the closure of the new Central Access Scheme in Kilkenny City until safety issues at the junction with Vicar Street/Dean Street have been addressed.

There have been a number of reports of near accidents involving cyclists and motorists there after the scheme’s intial opening last week, and local councillors have been getting calls on the matter. The new layout of the corner at Vicar Street has been causing problems since January of this year, but the opening of the St Francis Bridge has turned it into a junction catering to a significant volume of traffic approaching from an increased number of directions.

Cllr Malcolm Noonan is now calling on Kilkenny County Council to temporarily shut the road network down until safety issues have been addressed.

“I have received several reports of near misses at the junction of Vicar Street and the Dean Street entrance to KCAS, some involving cyclists,” said Cllr Noonan.

“There seems to be a lot of confusion coupled with excessive road engineering causing major problems in the first days of operation. It is inconceivable that the local authority can allow the ‘wait and see’ approach to prevail in light of such incidents.”

At Friday’s meeting of the Kilkenny City Municipal District, director of services Tim Butler told members that a traffic count was under way, and adjustments have been made to the traffic lights in Irishtown to give some extra time for traffic heading from St Francis Bridge to Dean Street.

The bridge and whole scheme is open less than a week, and some teething issues were always likely. Previously, the council has said a full traffic management plan will be put in place once sufficient information is available. It has been suggested that this plan will involve Vicar Street becoming a one-way route.

However, speaking to the Kilkenny People yesterday evening, Cllr Noonan said that the absence of a traffic management plan or clear communication to the general public was causing chaos, and that in order to protect the safety of motorists, cyclists and pedestrians the road should be closed until such a time as a plan to deal with the issues could be comprehensively addressed.

“Pretty much everything we anticipated and had warned road engineers about for years is now coming to pass,” said the Green Party councillor, who has been a vocal opponent of the scheme for ten years.

“This is road engineering on steroids and is having no real impact on alleviating traffic congestion in other parts of the city. Constructing more and more complex road networks will do nothing but add to traffic volumes, but now we need to address the problems that the road will continue to bring.”