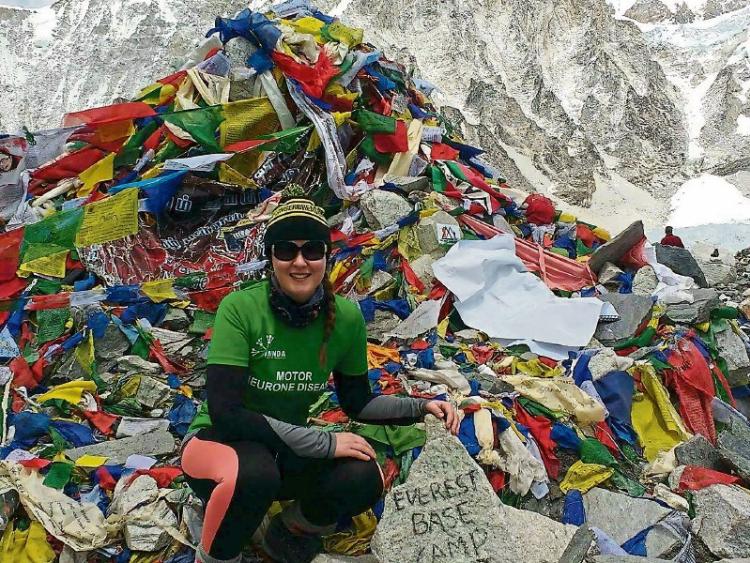 The Kilkenny College teacher at Base Camp, Mount Everest.

A LOCAL teacher has taken on a unique set of ‘seven challenges in seven months’ to raise funds for a charity close to her heart.

Sharon Byrne, who teaches in Kilkenny College, decided to do something a little different to help out the Irish Motor Neurone Disease Association, in memory of her uncle Domo, who passed away in October 2015.

To date, the 25-year-old english teacher’s efforts have seen her skydive from a plane, climb to Mount Everest’s base camp, and now she’s going vegetarian for a month — in her words, the toughest task yet.

“I started in February and gave up all social media for the month — a tough challenge but one of the best things I’ve done,” she said.

“Like so many others, I was constantly checking my phone and since then I am far less reliant on it.”

She paid the cost of her trek to the Himalays herself.

“Everest was an incredible experience,” she says.

“It was tough along the way at times, one member of the group even had to turn round and didn't make it with us which was a devastating blow for the group after all those days together.

“I actually felt the effects of the altitude on the day we were to reach Base Camp; I had a terrible headache and was so nauseous. I remember falling back on the trek and getting upset because I thought I wasn't going to make it and was thinking about everything I was doing it for. After the medicine kicked in later that day I was back to myself and I made it.”

Next month will see Sharon take part in a marathon in Waterford, and then in July, she’ll be giving up all junk food – sweets, treats, takeaways, and alcohol. In August, she’ll be running from Abbeyleix to Athy, and then the last challenge is the Dublin City Marathon in October, coinciding with the second anniversary of her uncles’s passing.

Sharon has also received great support from students and colleagues alike. Many of her second year class have acted in solidarity with some of the challenges, such as the social media one, and have taken on the vegetarianism also. They managed to raise €350 toward her cause.

“They're a super group, and the teachers have been so supportive as well, all the staff have been so helpful,” says Sharon.

Sharon has a Facebook , as well as an online fundraising page: www.give.everydayhero.com/ie/sharons7challenges