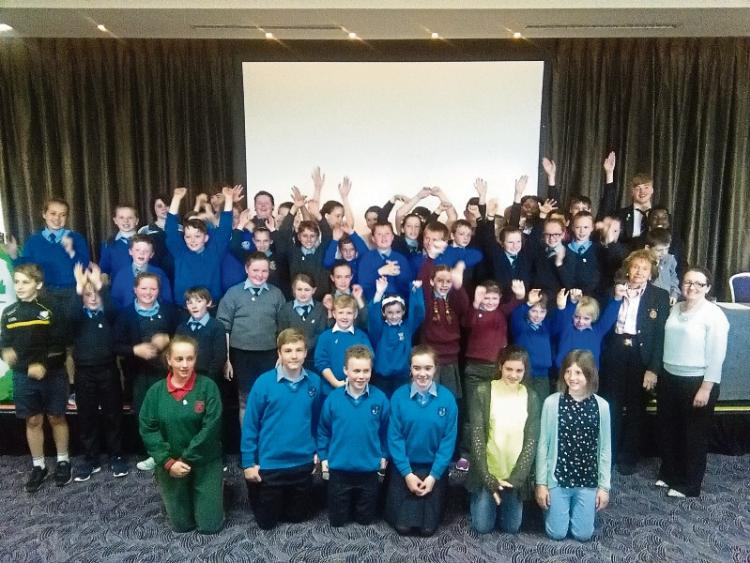 Celebrating at the Green Flag ceremony.

More than 20 local schools were celebrating last week as they received Green Flags from An Taisce for completing the seven steps of the Green School programme.

An Taisce’s award season is now in full swing, and the organisation was in Kilkenny last week. Nationally, 900 flags were awarded throughout May.

The statistics illustrate the difference the programme makes. From school participation this year alone, An Taisce calculated that 2,100 tonnes of waste has been diverted from landfill, which is equivalent to the weight of 420 elephants; 6.8 million units of electricity was conserved, which has the capability of powering a television for 3,900 years; and enough water was saved to fill 180 Olympic sized swimming pools.

Kilkenny County Council’s environmental awareness officer Bernadette Moloney spoke at the award ceremony and congratulated the schools on their work, which she saw firsthand during the assessment visits. She spoke of meeting enthusiastic pupils delighted to show how their school was advancing through the seven steps and she was impressed with the level of understanding younger children showed, as this year her work included the assessment of two local pre-schools.

“Visiting schools is always a highlight of my job, as it shows that the children do really care for the environment and they are each making positive steps to protect it which I hope will continue through into adulthood,” she said.

“While two pre-schools were represented at the award ceremony, there were also two secondary schools, which shows that the programme can work at all age ranges.”

There are 71 green flags now in County Kilkenny. Any school thinking of starting the programme next September is encouraged to contact the Environmental Awareness Unit in Kilkenny County Council which organises an information evening every September and provide school supports throughout the year.