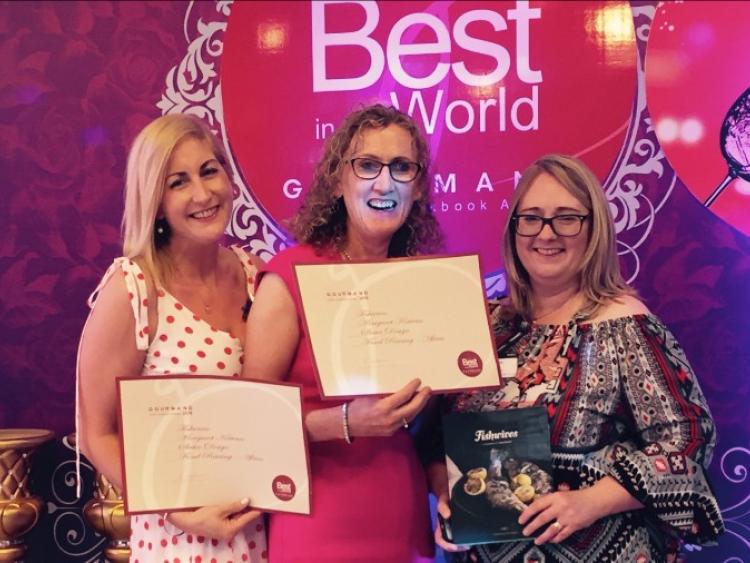 Siobhan Donohoe, Mag Kirwan and Denise Walsh at the awards in China

A charity cookbook featuring recipes from well-known Irish women including former Tanaiste, Mary Harney, has scooped two major prizes at the cookbook “Oscars” in China.
“Fishwives”, a collection of 78 recipes from women all over Ireland and the brainchild of Mags Kirwan of Goatsbridge Trout Farm in Thomastown, was named the fish cookbook of the year at the prestigious Gourmand World Cookbook Awards.
Launched last October in aid of charity Hospice Africa Uganda, “Fishwives” also won the “Fund-Raising Cookbook - Africa” category at the awards ceremony in China.
The Gourmand Awards have been compared to the “Oscars” for cookbooks. Founded in 1995 by Edouard Cointreau, they honour the best food and wine books, from around the world. Books from 205 countries entered the awards.
Goatsbridge published the book to celebrate trout, Ireland’s so-called “forgotten fish”, with proceeds going to Hospice Africa Uganda, a charity that is helping thousands of sick and dying in Africa have a pain-free, dignified death.
“Fishwives” contains recipes from women from the world of politics, entertainment, business and food including former Tanaiste and PD leader Mary Harney; food writers and bloggers Darina Allen, Clodagh McKenna, Suzanne Campbell, Lucinda O’Sullivan, Sally McKenna, Georgina Campbell and Clodagh McKenna and other personalities including Bibi Baskin and television presenter Helen Carroll.
Recipes in the book range from trout caviar cocktails to fish curries, pies and salads.
Kirwan’s four sisters, Miriam Donohoe, Louise Kiernan, Joanne Donohoe and Cathy Hoyne, all contributed recipes.
Miriam Donohoe volunteered with Hospice Africa Uganda for eight months last year and it was this experience which inspired her sister Mags Kirwan to give proceeds from her book to the charity.
Kirwan and her husband Ger travelled to Uganda earlier this year to see at first hand the work it does.
Kirwan has spent the last 25 years fighting the cause for trout and her company produces Ireland’s only caviar from trout roe.
“We have worked tirelessly to educate and promote what I believe is an amazing product. I am so proud to have won this award and also delighted that it will help raise awareness of Hospice Africa Uganda, an amazing charity doing such important work.”
As well as trout caviar Goatsbridge Trout Farm produces high-quality rainbow trout products including cold smoked and hot smoked trout selling under the ‘Eat Trout’ brand.
Hospice Africa Uganda was founded by the inspirational 81-year-old Nobel Peace Prize nominee Dr.Anne Merriman, in 1991.

Fishwives is available to buy on Amazon for €20.
All proceeds go to Hospice Africa.