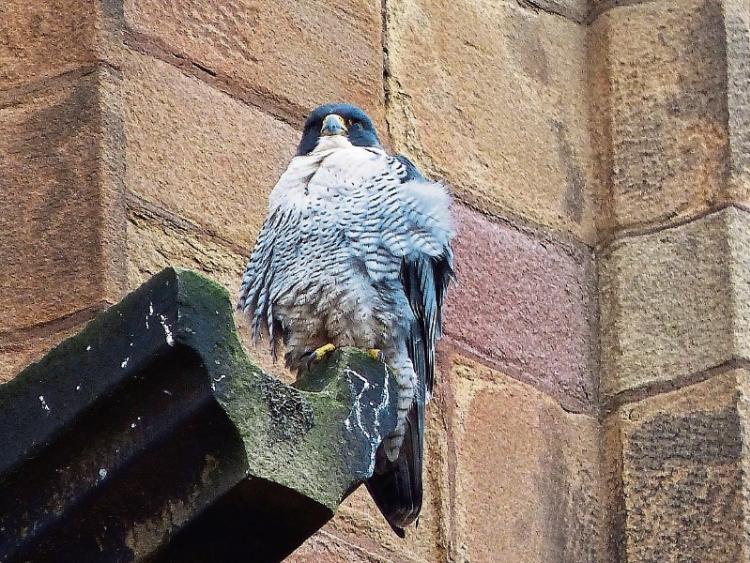 The haunting, screeching sound of the peregrine falcon strikes fear into the hearts of all other birds in its vicinity.

The area around James's Green in the centre of the city and the surrounding streets go silent of bird song once the peregrines leave their spotting point on top of St Mary's Cathedral and circle overhead looking for their next meal.

It is an awesome sight and birdwatchers like Martin Egan often spend an afternoon or evening watching the birds of prey.

They had been infrequent visitors to what is the highest point in the city but they have taken up full time occupation for the last couple of months, sending birdwatchers into raptures and those who fear the raptors into a state of fear.

There are six other nesting sites for these magnificent birds of prey around Kilkenny city and county but their locations cannot be revealed.

They remain a target for pigeon fanciers and Jimi Conroy, the Kilkenny conservation ranger, pointed out that those with racing pigeons will sometimes try to kill the peregrines.

Jimi pointed out that the peregrines only eat the weakest of prey and this includes crows and magpies as well as pigeons.

Peregrines are an endangered species in Ireland and it is a criminal offence to kill them punishable by a fine of incarceration.

So those with racing pigeons are doing a disservice to the members of the hawk family and Mr Conroy has asked they refrain to from it.

The Peregrine Falcon is often stated to be the fastest animal on the planet in its hunting dive, the stoop which involves soaring to a great height and then diving steeply at speeds commonly said to be over 200 mph, and hitting one wing of its prey so as not to harm itself on impact.