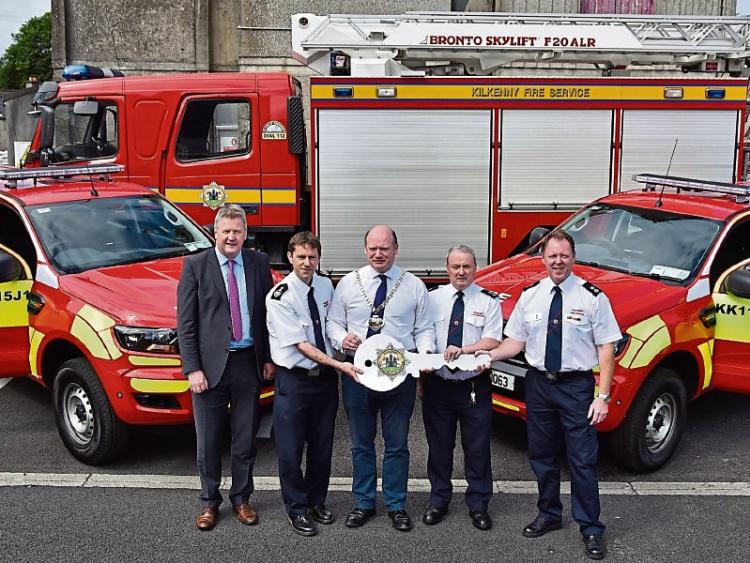 Two new fire jeeps have been added to an existing fleet of over thirty vehicles ensuring that the safety remains top of the agenda at Kilkenny Fire Services.

The Fine Gael councillor also called on business and home owners to carry out regular fire drills and ensure that their properties are up to the requisite fire safety standards.

His comments were made as the new jeeps were unveiled at Kilkenny Fire Station. The vehicles were purchased through the Office of Government Procurement framework from capital funding, to the tune of €58,000.

“I am delighted that we have a new improvement in the essential vehicles for the fire service. It is a timely reminder especially following the recent tragedy in London where 17 people died in a fire.

“It is important that all premises, both public and private, are compliant and I would call on people to hold regular fire drills. I spoke earlier this week at the AGM of Kilkenny Tourism and stressed the necessity of having regular drills”, he said.

“After years of austerity and a lack of funding I am delighted to see that the fleets, not only of the fire service but also the gardaí and ambulance are being renewed,” he added.

These vehicles are equipped with latest modern safety livery and capable of transporting both personnel and equipment safely to the scene of the emergency and have both on and off road capabilities and will be used to transport personnel, fend off at incidents, carry equipment and tow variable message signs trailers, essential for providing the safest protection to both firefighters and the members of the public involved in the incident. These new jeeps are in addition to the existing fleet of over 30 vehicles in Kilkenny Fire and Rescue Service.

Chief Fire Officer John Collins welcomed the new addition to the existing fleet and praised the work of all his staff in recently passing with flying colours an inspection carried out by the Road Safety Authority under the Vehicle Maintenance and Repair.

“This investment along with the construction of Graignamanagh Fire Station reflects Kilkenny County Councils continued commitment to Kilkenny Fire and Rescue Service in delivering an effective service to our communities,” he said.