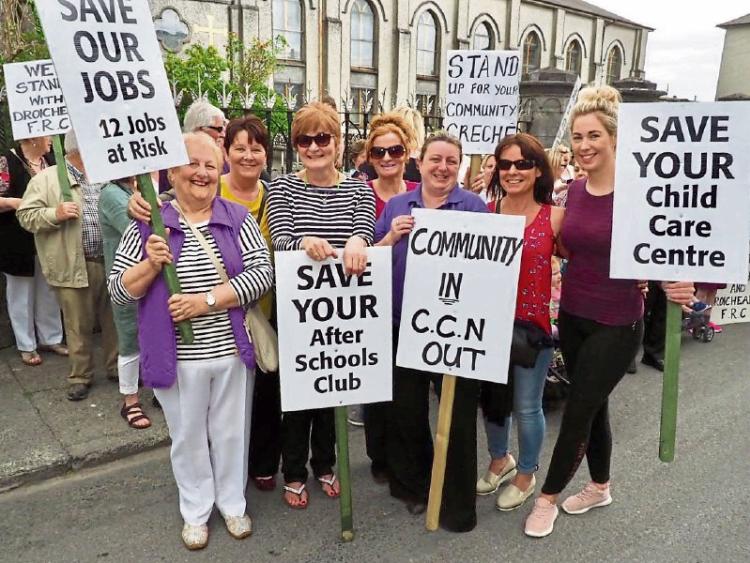 A picket was held outside the complex last month. Worries persist over the future of the childcare facility, with another meeting planned later this month

Another public meeting is to take place in Callan later this month regarding the future of the Droichead childcare facility.

The meeting has been organised by local Sinn Fein TD Kathleen Funchion and councillor Sean Tyrrell, and follows two previous meetings held in the town to discuss ongoing fears over the facility’s future.

A dispute remains ongoing between the Droichead Family Resource Centre and its landlords, Callan Community Network (CCN), which gave the former notice to quit the Friary complex last month. The deadline to do so was extended to August, and locals are worried about its long-term future.

Some have also expressed concern that they don’t have a say in what is to happen to the complex, on who makes decisions, and who controls the various buildings. There are also questions regarding rent, insurance and utilities.

The local Sinn Fein group, which organised the previous two meetings in the parish hall, also invited the Callan Community Network. They say the CCN has failed to engage with the people of Callan on the matter.

However, the Callan Community Network says it is happy to engage with all parties, but it too has a number of concerns. A spokesperson for the CCN says that all parties need to ‘condemn attempts at cyber intimidation’ and not associate with those engaged in such activity. They say that people related to the Friary have had personal details and pictures posted online, and that even private details of CCN directors’ children have been posted.

The CCN is also seeking clarity over some missing property and damage at the complex.

It says that a number of public representatives have ‘chosen electioneering’ over the truth. However, the CCN has also said that there is ‘no threat to the crèche’, and the network is committed to the future of the facility.

The next public meeting takes place on Tuesday, July 25 in the parish hall.

“It is for the benefit of Callan and all its people that all aspects of this matter are resolved and that the parents and children using the excellent childcare facility and those working there who perform such a dedicated and top class service are given an assurance of security and certainty going forward,” says Deputy Kathleen Funchion.