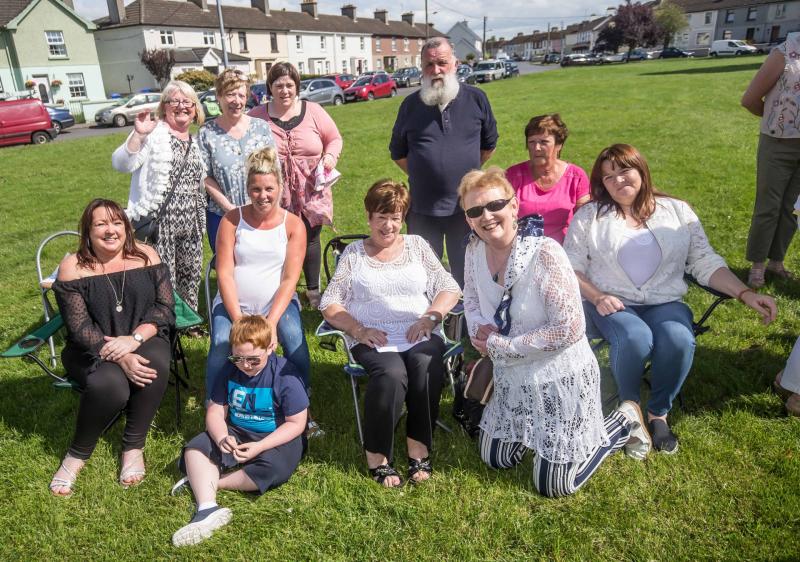 Born and bred in Fatima Place I don’t feel fully  qualified to write about Emmet Street; all I will say is that many of the following verses apply equally well to the good people of Emmet Street,  as much as they do to the people of Fatima writes Gerry Moran

We are the folks from Fatima and we’ve come from far and near
To celebrate our childhood days in a place that we hold dear
The place where we were born and bred, where we kids ran wild & free
Where no one had a bob to spare & no one had TV
Where children all wore hand-me-downs and men wore grey or black
Where mothers changed REAL nappies and dads grew cabbage out the back
We had Brennans, Bretts, Blanches - Mahers, Murrays & McKees
Fahys, Powers, Carpenters - Gaffneys, Gibbons and McGhees
Guideras, Nearys, Knoxes & Beales with the white door
Denieffes, Dohenys, Donoghues and McDonalds in 54
And we weren’t short of nicknames: Bugs, Bandy, Bilko, Gort
Mallett, Mitch, Yummy, Puddy, Nellie, Scut, Rashers, Toots, Knocky,
Garne, Hopper, Archie - sure they didn’t cause any hurt!
And then, of course, there was Snowball, a loveable character to the core
Like Wag, his dad before him, their likes we’ll see no more.

On the road is where we children played, morning, noon and night:
Guards & Prisoners, Skipping, Skittles and Jack, Jack, Flash the Light
We had trollies, hoops and hopscotch, played marbles, Kick-the-Can
And we loved it when the Ragman called in his balloon-emblazoned van
We played tennis on the road, with simple lines for nets
We played cards with beer-bottle labels, our currency for bets
With our hurls we played rounders & cricket & golf – all three
While the wicket for the cricket was old Mrs. Hogan’s tree!
And, of course, we played hurling every day out on the green
Our Eamon, ‘Yummy’, Morrissey made an All-Ireland winning team
Some Septembers we lit bon-fires there when the ‘Cats’ were in Croke Park
We rolled tyres from Highlands Quarry that blazed bright into the dark
Then a true-blue hurling hero arrived in Fatima Place
The legendary goalie Ollie Walsh made our Fatima his base
And Ollie’s good wife Olive always let us use their phone
Not least to call our Eadie, thousands of miles from home
(I think we still owe you a few bob for those calls Olive)
And we still have Mrs. Wall and Bridie Brennan (91) and going strong
Bridie loves to play the Bingo, Christ, she’d play it in Hong Kong!
And I think the last men standing from that old vintage mix
Are Jack Cody, Seán McKee and Mick Knox in 46
While flying the flag for Emmet St & still ‘motoring’ in top gear
At four score and seven years – Richard, Dick, Cleere.

And we also played the soccer, founded EMFA – what a name!
A team that Jimmy Rhatigan steered, to titles and national acclaim
The Shop, of course, is where we went for fizz-bags, ice-cream, sweets
Where Betty & Carmel always smiled as they handed us our treats
And we cannot talk of Fatima without mentioning Daly’s Hill
A treasure-chest of memories that are vivid and precious still
We were cowboys there & indians, it’s where we’d trick & fool & brawl
It’s where I got my first kiss, perhaps the sweetest kiss of all!
The sand pit we remember and scary ‘Baldy’ Teehan
With his long black coat & greyhounds but he wasn’t that bad or mean
We caught brickeens, tadpoles, lizards, in Murphy’s pond, of course
And hands up who remembers: Johnny Byrne’s horse?
And we had right fun up the car-roads, with catapults and slug-guns
Robbing Dolly Blanche’s strawberries and Mrs. Knox’s plums.

And there was music there in the Fatima air, thanks to Mrs. McKee
We had champion Irish dancers, thanks to Mrs. T & G (Travers & Gaffney)
Ah, the women they were mighty – Judy, ‘Jiggy’, Maureen, Molly
Kitty, Cis, Peggy, Nan, Statia, Nancy, Eily and Dolly.
And we remember our dear parents who gave us of their best
Gave us love and lasting values and who, in love and peace, now rest
We remember those from Fatima - young, old, single and wed
Who have ‘gone into the light’ now, may Heaven be their bed.
So, here’s to ALL from Fatima Place and neighbouring Emmet Street
Decent people, mighty people, as nice a people as you could meet.

Finally – on behalf of all of us who had a mighty time reuniting and reminiscing in the Dicksboro Hurling Club last Saturday, sincere thanks to Eddie Hoyne, Helen Carpenter, Noreen Travers, Bridget Cashin and all who helped in any way to make the reunion such a wonderful success. And thank you John Travers for the music and engaging banter, thank you Fr. Kieran O’Shea for saying Mass on the green and thank you John McGuinness TD for popping by and thank you Mayor Michael Doyle for the complimentary words. Until the next time!